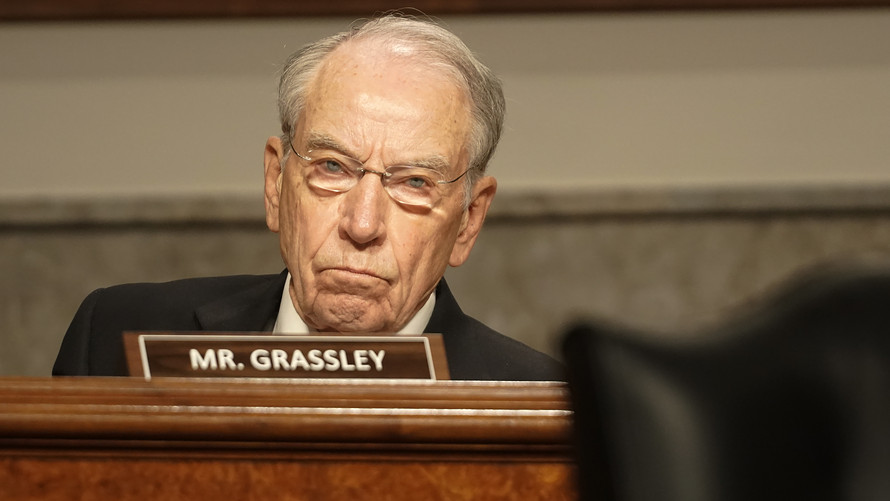 The Iowa senator, a longtime advocate for the watchdog role of inspectors general, pledged to block Senate consideration of Christopher Miller to be director of the National Counterterrorism Center and Marshall Billingslea to be undersecretary of state for arms control and international security, indefinitely.

While the Constitution gives the president authority to hire and fire executive branch personnel, “Congress has made it clear that should the president find reason to fire an inspector general, there ought to be a good reason for it,’’ Grassley said.

A White House letter last week addressing the firings did not answer his questions, Grassley said, adding that his request for information is “clearly stated in statute and accompanying reports.”

Without sufficient explanation, “the American people will be left speculating whether political or self-interests are to blame. That’s not good for the presidency or government accountability,’’ Grassley said.

In a May 26 letter, the White House said Trump followed the law when he fired multiple inspectors general, but offered no new details about why the internal watchdogs were let go.

White House counsel Pat Cipollone said in the five-page letter that Trump has the authority to remove inspectors general, that he appropriately alerted Congress and that he selected qualified officials as replacements. The letter did little to quell outrage from Democrats and good-government groups that fear the Republican president is moving to dismantle a post-Watergate network of watchdogs meant to root out corruption, fraud and other problems inside federal agencies.

The tumult has not been limited to the watchdog offices at the State Department and the intelligence community. Trump also demoted Glenn Fine from his role as acting inspector general at the Pentagon, effectively removing him as head of a special board to oversee auditing of the coronavirus economic relief package. Fine resigned last week.

And Trump moved to replace acting IGs at the departments of Transportation and Health and Human Services.

Taken together, the moves have raised alarms about efforts to weaken government oversight and about possible retaliation for investigations or actions seen as unfavorable to the administration.

Atkinson, who was fired as intelligence community inspector general in April, advanced a whistleblower complaint that resulted in the president’s impeachment. Linick told Congress he was conducting investigations tied to Secretary of State Mike Pompeo’s use of government resources as well as Pompeo’s decision to approve a multibillion-dollar arms sale to Saudi Arabia.

A 2008 law requires the president to provide Congress with a written explanation at least 30 days prior to removing an inspector general. The law is intended to prevent politically motivated terminations, although there is little Congress can do to block an IG’s firing.