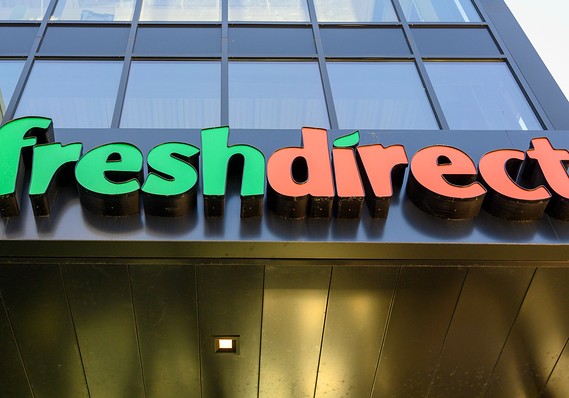 Getty Images
The FreshDirect sign is mounted on their facility in the Bronx on October 23, 2019 in New York. - FreshDirect is an online grocer that delivers to residences and offices in the New York City metropolitan area

Fresh Direct, founded in 1999 to deliver groceries and fresh food to New Yorkers, has suddenly become an essential service amid the social lockdown resulting from the coronavirus pandemic.

CEO David McInerney, one of FreshDirect’s co-founders, told MarketWatch that activity is up 60% compared to a year ago. Customers are “stocking up,” he said, not hoarding. And while McInernery declined to give specifics, he did say the company is making some adjustments to pay for its delivery workers, whom he likens to first responders just like public safety officials.

What’s in customers’ shopping carts? Lots of products that probably indicate households are engaging in what the company calls “longer cooking projects”, such as curry powder, whole cloves, active dry yeast, meat and seafood. “It also looks like customers are looking to recreate some of their favorite dining out or travel experiences at home in lieu of being able to go out,” a spokesperson said. “This includes fine cheeses and bagels. Within the adult beverage department, Vodka is growing very fast.”

The interview that follows is lightly edited for clarity.

David McInerney: I’m going to try to limit my use of the word “unprecedented.” It’s been a wild ride for the past few weeks. It started in early March, I think about the 5th, it came out of nowhere. The demand for online shopping is huge, tremendous, and we are doing the best that we can to fill what we can. There’s no way we’ll be able to fill all the demand. We’re up 60% compared to last March. We’re trying to do the right thing by existing customers. All indications are that people are super appreciative of that. I’m hearing that they’re sharing words of encouragement, offering moral support.

People use the term ‘hoarding, but it’s what we would call a ‘stock-up.’

MarketWatch: I want to ask you about your delivery folks because they’re the face of the company and they’re out and about in the world. How are you keeping them safe, and are you compensating them above and beyond what you would normally?

McInerney: I think they see themselves as first responders, people out on the front lines, no different than police, firefighters, or doctors. We did make some adjustments. Yes, of course we did that and we want keep them safe. Frankly, it could never be enough. Because we’re a food company, we started off with really high standards and once this started the team aggressively moved ahead. We’re practicing social distancing, the drivers are provided wipes and hand sanitizer, and we adopted a policy a while ago of dropping the bags at the door, not going into the homes. I walk around the city thanking people, I saw a couple police officers and thanked them and I saw a Fresh Direct truck and I went and said the same thing. When most people are sitting at home, they’re out on the front lines.

MarketWatch: You sent out a note last week saying one warehouse worker had tested positive for the virus. Can you reassure customers that the food coming into their homes is safe?

McInerney: Everything I’m hearing is that we should expect this to be widespread. We are delivering to 100,000 households in a week via 3,000 people, keeping those people out of stores and off the streets. With the size of the orders we’re filling, you would need two people to go to a store.

MarketWatch: Has the average order size gone up?

McInerney: Yes, it’s been tremendous. People use the term “hoarding,” but it’s what we would call a “stock-up.” People didn’t have a lot in the pantries before and they’re stocking them now. They’re not buying, say, 95 of something, they’re buying some of a lot of things. This has been a shift that this country has never seen, how consumers are consuming food. We went in a matter of weeks from people eating a few meals at home to today virtually all meals at home. That’s a giant shift in consumption and with that comes, enormous strain on retailers. We have to be nimble and adjust in real time. We’ve seen a shift into fresh food which reflects people eating at home. All we’re doing is capturing consumers’ entire shop. I think all retailers are doing a phenomenal job.

MarketWatch: Should New Yorkers be worried about the food supply?

McInerney: I think all indications that we’ve seen thus far, because we buy directly, from farmers and fishermen and ranchers and manufacturers, all indications thus far is that they’re growing food and producing goods and we are expecting that to continue. Yes, we would like to see within our customer group each day buying the food they need for the week not weeks ahead.

One thing we’re focused on is not just people who can afford food, but people who can’t. There is some concern there from me. We are truly in uncertain times and that breeds fear. We as a community will get through COVID19, but there is a basic underlying fear that some people face every day which is, where is my next meal coming from?

We’re working with New York Common Pantry, a great organization that feeds people with dignity and allows them to shop online. They choose items and volunteers pack up items. Now that everyone is home those volunteers have dried up. We’re filling that gap today, producing the boxes of food. It should be on everyone’s radar, anyone who’s fortunate enough to be food with access to food, we should all think about making sure everyone does.

MarketWatch: When was your last day off?

McInerney: It’s been a bit. But you know what, we don’t really consider it work. Retailing is fun. Food is a really fun business and people are truly counting on us in a more serious way now.

Read: These small-business owners made their dreams come true — and then the coronavirus hit