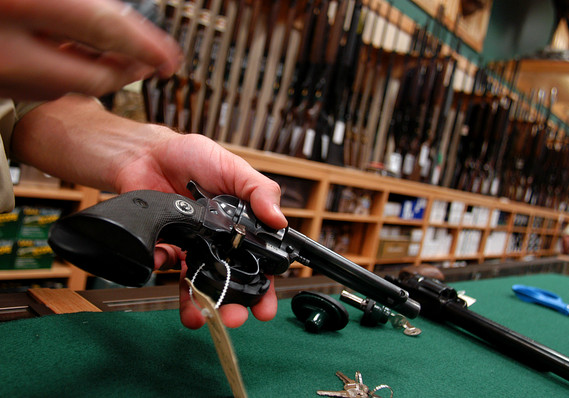 Even as U.S. stocks trade near all-time highs, one industry has taken it on the chin in the Trump era: gun manufacturers.

This is not an isolated matter. The National Rifle Association, the powerful lobbying organization that represents the gun industry, has serious problems too. In June, it was forced to take NRA-TV off the air—the victim of growing financial troubles and political infighting at the troubled gun lobby. And just last week, three NRA board members were pushed out for raising questions about mismanagement, saying “our confidence in the NRA’s leadership has been shattered.”

The circular firing squad at the Virginia-based organization, can be traced to its chief executive officer Wayne LaPierre, who has been struggling with rivals, including former President Oliver North, who was shown the door in April . Sounds like you need a kevlar vest to work there.

You may know LaPierre. He’s the guy who sneers at Washington “elites,” despite the fact that he lives high on the hog in a posh Washington-area mansion, traveling like an emperor and raking in a salary that hovers around $1 million— but has swelled to as much as $5 million —a year. He was one of the very first people invited to the Trump White House in 2017, and with good reason: He funneled $30 million+ into the president’s 2016 campaign, a huge bet that paid off big. That kind of legal bribery gets you a seat at the table in this town (and you bought all of Trump’s fake news about how he’d drain the swamp, didn’t you?).

Everybody knows that despite the horrific coast-to-coast violence we’ve seen in the past week alone—mass shootings in Gilroy, California, El Paso, Texas and Dayton, Ohio—that nothing will change at the federal level. Fifteen of the NRA’s most reliable House Republicans were voted out last November, and Democrats, now in the majority, have passed a variety of gun control legislation. But Republicans still control the Senate and White House of course, so Nancy Pelosi can pass all the bills she wants, and nothing will come of it. All Republicans have to do is hang onto either the Senate or White House in the 2020 election (and they could hang on to both) and the NRA’s agenda is safe well into the next decade. Beyond Washington, it continues to wield major influence in red states, of course.

But here are two additional thoughts that could pose a threat to the industry. People forget that after the Parkland high school massacre in 2018—in which an expelled student murdered 17 students and staff members and injured 17 others—Trump said the government could just seize the guns of people who might commit violence before going through legal due process in the courts.

“I like taking guns away early,” Trump said . “Take the guns first, go through due process second.” Can you imagine the outrage from the right if Barack Obama ever said that? Yet Donald Trump actually did.

If Trump—who is 1) never really loyal to anyone other than himself and 2) known for changing his mind on a dime—is re-elected, he may decide that he doesn’t need the NRA any more and could do something to bolster his legacy. I think it’s unlikely, but with Donald Trump you never really know. He hinted Sunday that “perhaps” more needs to be done.

And yet I don’t think Washington is the NRA’s biggest long-term problem. Aside from investors turning their backs on the gun industry, market forces, demographics and changing consumer tastes are slowly, but steadily, weakening the gun industry as a whole. The percentage of households that acknowledge having a gun has been falling , slowly but steadily for decades. In 1977, says the National Opinion Research Center, the non-partisan and objective research organization at the University of Chicago, 50.4% of American households had a gun. By 2014: 31.0%. That’s a decline of about four-fifths of a percentage point, each year for nearly four decades.

If that’s the case, who owns the estimated 1.2 guns for every man, woman and child in the United States (or 392 million guns)? A separate survey, by the Washington-based Pew Research Center, shows that gun ownership tends to skew towards Americans who are 1) older, 2) white, 3) live in rural areas and 4) have lesser educations. These trends run counter to an America that is growing more urban, more educated and less white than ever before .This in turn suggests that gun ownership is heavily, concentrated fewer and fewer households.

The declining interest among most Americans—again, according to the three separate surveys mention above—hasn’t escaped the attention of corporate America, which has been getting out of the gun business for years, closing off sales channels for guns and ammo. In fact, only one major retailer now sells the kind of semi-automatic assault-style rifles that have been used in so many mass shootings: Bass Pro Shops, which now includes Cabela’s, a competitor it bought three years ago.

The NRA has been unable to halt, much less reverse, the corporate, consumer, demographic and investment trends that are slowly and steadily moving against them, and have been for years. For all the hand-wringing about how Washington won’t act on guns—and it certainly won’t now—it’s clear that the marketplace is doing so, whether the gun lobby likes it or not.

Get news alerts on American Outdoor Brands Corp. and Sturm Ruger & Co. — or create your own.