Has oil finally made its low?

In case you were on a submarine below the Arctic ice for the past 12 months, the decline in oil prices has been the financial news story of 2014 and continues to dominate headlines in 2015. Everyone is looking for a low, and the recent action has raised questions of whether or not we have found it.

The combination of the fracking boom in the U.S., an unrestrained OPEC and slowing global economies has produced a world oil glut. The result? Oil prices dropping by 57% in just the last seven months to their lowest levels since the great recession.

The story is primarily a supply one. Oil supplies in the U.S. hit a fresh record high last week at 413.06 million barrels. EIA crude stocks are 54.975 million barrels above year ago levels.

Yet prices appear to have hit a consolidation level between$45-$50. It's hard to see the fundamentals getting any bleaker than they are now. But prices seem hesitant to push much below $45. Why?

It is our opinion that the worst of the supply side story has been priced and the news over the next three to six months could be, how do we say, "less bearish."

What is driving the supply glut?

The first thing you should realize about the current glut in oil is that Saudi Arabia is driving the boat. It was the Saudis choice to ramp up production instead of cut back to support price last year. It is speculated they did this to accomplish three main objectives.

One could argue it has accomplished all three. Russia's economy is in shambles due to slashed oil revenue (amongst other things). Iran is not as bad yet, but getting there. As for U.S. frackers, their eyes are watering.

In the U.S., many fracking operations cannot survive with prices under $60 and recent data confirms it. The U.S. oil-rig count has fallen by 24% since hitting highs in October. Current U.S. rig count stands at 1223 rigs. (Source: BakerHughes).

For a more dramatic example, Canada's rig count is down by over 65% since last year.

That trend will continue as long as oil remains below $60 and potentially below $70. This will eventually start to choke off a new supply of oil, allowing inventories to begin to draw down again. If you need a better example of how low prices cure low prices in a free market economy, look no further.

At the same time, fiscal budgets for the Saudis and their allies rely on oil prices at $70 or $80. They can get by at $60, but not at $45. Thus far, they have been willing to take the short-term pain to punish their enemies and pare back their competitors.

But they can't take it forever. 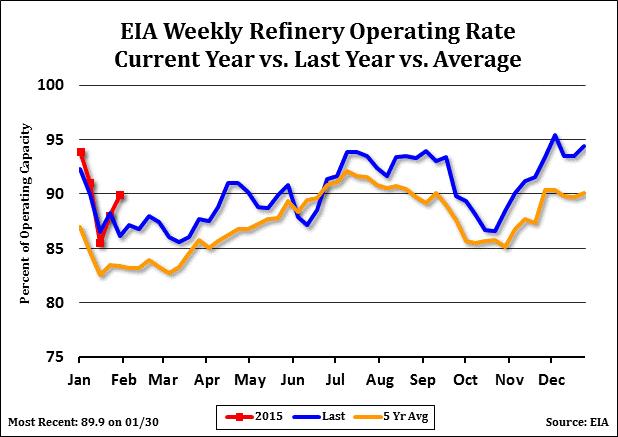 Near-record supply builds in the U.S. have not been helped by low refinery operating rates in January as refineries shut down for maintenance. Part of this maintenance is recalibrating plants toward gasoline production over heating-oil production.