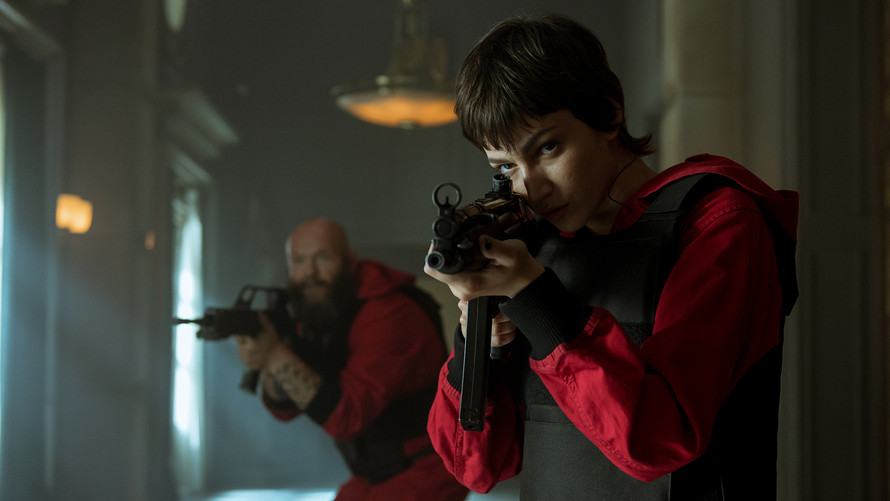 Netflix Inc.
Thieves must fend off enemies from both inside and outside the Bank of Spain in Season 4 of Netflix's "Money Heist."

Most of the country will likely be holed up at home and self-isolating for much of April amid the coronavirus outbreak. Luckily, Netflix Inc. has a bunch of new stuff on tap to keep your eyeballs busy.

Among the highlights from the streaming service: Season 4 of “ La Casa de Papel” (“Money Heist”) (April 3), a ridiculously fun and suspenseful crime drama about a gang of crooks robbing the Bank of Spain; Season 2 of the fascinating sports docu-series “Sunderland ’Til I Die” (April 1), about a once-proud soccer team and its passionate fanbase as they try to crawl out of England’s third-tier league; Season 4 of the baking-disaster reality competition “Nailed It” (April 1); Season 3 of the tense Israeli espionage drama “Fauda” (April 16); “#blackAF” (April 17), a new mockumentary sitcom from “Black-ish” creator Kenya Barris; and “Never Have I Ever” (April 27), a coming-of-age comedy series about an Indian American teenage girl, inspired by producer Mindy Kaling’s childhood.

For those needing more laughs, there are comedy specials such as “The Iliza Shlesinger Sketch Show” (April 1); Chris D’Elia’s standup special “No Pain” (April 14); “Middleditch & Schwartz” (April 21), from “Silicon Valley” star Thomas Middleditch and Ben Schwartz of “Parks and Recreation”; and “Yours Sincerely” (April 24), a standup special from Kanan Gill.

And: Everything coming in April to Hulu and Amazon Prime Video.

Netflix /zigman2/quotes/202353025/composite NFLX -0.75%   is also adding all six season of the brilliant and surreal sitcom “Community” (April 1), all three movies from “The Matrix” trilogy, David Fincher’s excellent Mark Zuckerberg biopic “The Social Network” and the classic spaghetti Western “The Good, the Bad and the Ugly” (April 2). It’s also your last chance to watch “GoodFellas,” “The Shawshank Redemption ” and “Step Brothers,” which are leaving at the end of the month.

How to Fix a Drug Scandal — Netflix Documentary

Cheech & Chong’s Up in Smoke

The Perks of Being a Wallflower

The Killing of a Sacred Deer

Jem and the Holograms