Beto O’Rourke: ‘Sometimes, I think that Sen. Warren is more focused on being punitive’ 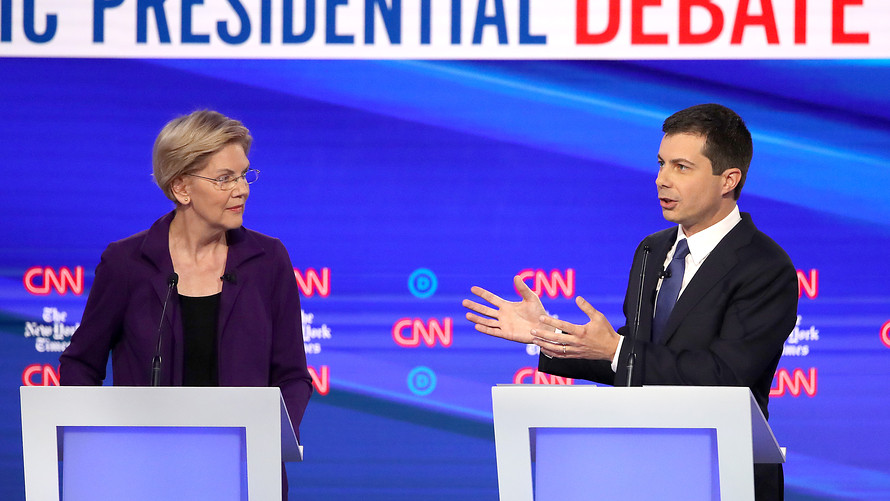 With Elizabeth Warren challenging Joe Biden this month for the front-runner label, she was expected to get extra attention at Tuesday night’s debate in Ohio.

Her fellow 2020 Democrats provided her with exactly that, as several showed that their knives were out for the Massachusetts senator.

Here are some of the sharpest attacks:

• In going after Warren’s support for “Medicare for All,” Minnesota Sen. Amy Klobuchar said: “At least Bernie is being honest here, and saying how he’s going to pay for this and that taxes are going to go up.” She added: “I’m sorry, Elizabeth, but you have not said that and I think we owe the American people to tell them where we will send the invoice.”

• South Bend, Ind., Mayor Pete Buttigieg also attacked Warren for not clearly saying whether or not middle-class taxpayers would see higher taxes due to “Medicare for All.” He said: “A yes-or-no question that didn’t get a yes-or-no answer. This is why people are so frustrated with Washington in general and Capitol Hill in particular.”

• Former Texas Rep. Beto O’Rourke had this broad criticism: “Sometimes, I think that Sen. Warren is more focused on being punitive or pitting some part of the country against the other, instead of lifting people up and making sure that this country comes together around those solutions.”

• Klobuchar had another zinger aimed at Warren, as the Minnesota senator argued for her plan to give Americans a public option over the Massachusetts lawmaker’s approach: “You are making Republican talking points right here in this room.” She added: “The difference between a plan and a pipe dream is something you can actually get done.”

Also read: Some 2020 Democrats are angling for the VP slot — a gambit that rarely pays off

Taking a different approach, New Jersey Sen. Cory Booker warned his fellow Democrats following their attacks on Warren. “Tearing each other down because we have a different plan to me is unacceptable,” he said. “I have seen this script before. It didn’t work in 2016 and it will be a disaster for us in 2020.”

And see: Biden plays defense at debate: ‘My son did nothing wrong’