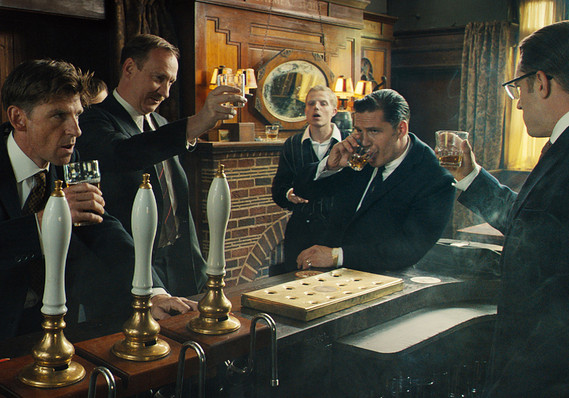 Universal Pictures/courtesy Everett Collection
A new study looks at the pay off on the ‘old boys’ club.’

It’s old news that the “old boys’ club” can help some men climb the corporate ladder — just ask the many women who have struggled to break the glass ceiling.

But a new study has put a price tag on the value of admission to that exclusive club.

More than one-third (38%) of the pay gap between men and women — at least at one unidentified Asian bank — is due to the informal male-to-male face time that happens during activities like talking about sports or sharing a smoke break, according to Harvard University and University of California, Los Angeles researchers.

The report sheds light on a complex constellation of factors that can lead to a lack of diversity at the highest levels of Corporate America, deeply entrenched social, educational and racial structures that finds at least some of their roots in male bonding, elite schooling and social networks that may go back generations. The report suggests the ‘old boy’s club’ premium cuts deep, according to the report. Last year, a woman earned 81 cents for every dollar a man made across all industries, according to November data from the Bureau of Labor Statistics.

College connections can create another advantage; a shared alma mater can catch a recruiter’s eye or pave the way for introductory phone call, experts say. But with the cost of college soaring, that option is increasingly out of reach. Some critics, like former Federal Reserve Bank of New York President William Dudley, have said colleges giving preferential treatment to applicants who are children of alumni can harm economic mobility.

There has been some progress to make the path to promotion freer of obstacles for women. The latest gender-parity report from LeanIn.org and McKinsey & Co. reveals a mixed bag for women in the workplace — including an early “broken rung” that hamstrings women as they begin climbing the corporate ladder.

More women than before are being hired for director-level jobs and higher, and women in senior-level roles are generally being promoted at higher rates than their male counterparts, it found. Despite this mostly upward trend at the top — representation of women in the C-suite dipped one percentage point between 2018 and 2019 — women are still “significantly under-represented” at all levels, the study found, making up only one in five executives in the C-suite.

Companies have expanded women’s executive presence, with the share of women in the C-suite ticking up from 17% in 2015 to 21% in 2019, according to the newest survey of 329 companies in the U.S. and Canada and more than 68,500 workers from 77 companies. Those numbers are even worse for women of color, who made up just 4% C-suite executives in the survey.

Women did not see similar gains after switching managers: they had the same earnings trajectory whether they had male or female bosses, researchers said.

Researchers discounted the idea that male managers produced better results from their male workers because there was no noticeable difference in sales revenue or hours worked when men worked for men.

Researchers discounted the idea that male managers produced better results from their male workers because there was no noticeable difference in sales revenue or hours worked when men worked for men.

The average amount of time it took for male managers to promote their male workers also demonstrated the influence of the old boys’ network, researchers said. “The advantage develops slowly over the course of two years, consistent with the time-intensive process of relationship building. This advantage is concentrated in positions where male managers and employees spend time in close proximity,” researchers wrote in the study, which the National Bureau of Economic Research distributed on Monday.

The study pulled from data and surveys at an unidentified “large commercial bank in Asia” with “millions of customers and billions of dollars in assets and in revenues.” Though based abroad, the company’s hierarchy resembled many American companies, becoming increasingly male higher up the chain of command.

Three-quarters of the bank’s entry-level workers were women and there were no women at the CEO and board level, according to the study, which was distributed Monday by the National Bureau of Economic Research.

A survey this year from the consulting firm McKinsey & Company and LeanIn.org also found steep drop-offs for American banking companies, with women making up half of entry-level staff and 27% of the C-suite.

The new study underscored the power of real-life face time, whether that’s through idle chitchat about sports or sharing a smoke break with the boss. In fact, male smokers who happened to have male smokers for a boss also had quicker promotion rates. One third of the company’s male workers smoked, compared to less than 5% of its female workers.

Zoe Cullen, one of the study authors and an assistant professor of business administration at Harvard Business School, told MarketWatch that the “magnitude of the effect” surprised her.

The good news: More women than before are being hired for director-level jobs and higher, and women in senior-level roles are generally being promoted at higher rates than their male counterparts.

The study also underscored the importance of standardized promotion policies and “more gender- neutral socialization practices” in the workplace, she said.

Friedman, who works with financial firms to diversify their talent pipeline, says the male-dominated network is strong and starts early. She remembers listening to her son talk sports with his friends years ago and thinking, “Oh my gosh, this starts at 10 years old in the back seat in a carpool. … If you’re in a better position to bond with men, and done that your whole life, that’s a career advantage.”

“Sponsorship” — having a higher-level advocate to think of someone for an important assignment or position — may be one way to help counteract that effect. (Male sponsors appear to have a substantial impact on a person’s pay, a recent PayScale report suggested. Women with female sponsors were paid 14.6% less than those with male sponsors, the report found.)

The so-called old boys’ club provided those sponsorships informally, but Friedman works with companies to do that on a formal basis with women. “It’s really putting structure around it, shining some light on it and calling it what it is,” she said.

A second way to break down informal barriers is for companies to avoid hosting group activities that might be more appealing to men than women, like after-hour drinks at a bar, Friedman said. For example, she worked with one company that held a cooking competition.

The Harvard and UCLA study looked at the effects of male bonding in the workplace, but that’s not the only way some try to get ahead beyond their grit, hard work and creativity.