Outlook for the sector clouded by trade disagreements 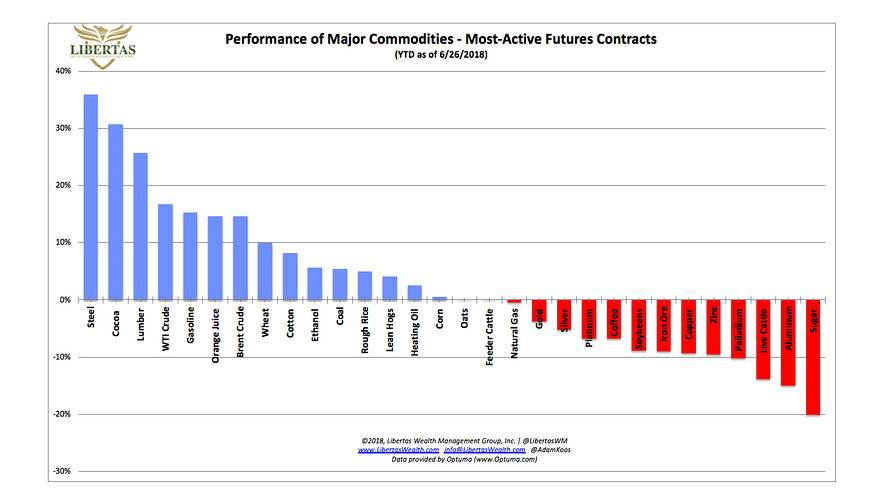 LIbertas Wealth Management
U.S. steel futures led the gains, while sugar saw the biggest losses among major commodities in the first half of 2018.

Commodities’ returns have failed to live up to bullish expectations in the first half of 2018, with a key index on the verge of posting a loss.

The “performance this year has been a combination of fundamental strength with geopolitical hindrance,” says Adam Koos, president of Libertas Wealth Management Group. “Trade news has dominated commodity prices,” and “there is so much uncertainty” about the outlook.

Year to date as of Tuesday, the biggest commodity percentage decliners included sugar , which has seen futures prices drop by more than 18%; live cattle , down about 16%; and palladium , down 10%.

Gainers included U.S. steel futures , which have rallied by nearly 37%; cocoa , up nearly 31%; and lumber , which has climbed more than 25%.

The Bloomberg Commodity Index /zigman2/quotes/210597940/realtime XX:BCOM -1.16% , made up of 22 exchange-traded commodity futures contracts, traded 1.9% lower year to date as of Tuesday.

Energy, which has gained in the first half, makes up the largest group in the index, but grains also play a big role. Soybean futures  fell nearly 8%.

Soybeans dropped on “better-than-expected crop yields and improving weather conditions” and “increasing concerns of negative fallout over U.S.-China trade frictions,” says Will Rhind, CEO of ETF-issuer GraniteShares. China, the world’s biggest consumer of soybeans, is expected to retaliate against U.S. tariffs on other products.

The U.S. imposed tariffs on steel and aluminum imports, and tariffs on billions of dollars of Chinese goods are expected to take effect in July. The Trump administration has also threatened more tariffs in response to any European Union, Chinese, Mexican, Canadian, or Indian duty hikes.

Read: Here’s what steel and aluminum tariffs on U.S. allies mean for the metals markets

That backdrop has produced “volatile” commodities trading, says Koos: “Investors want to know what trade will look like when all the political bomb-throwing stops and the dust settles. Until then, commodities will continue to be a swing trader’s dream.”

Among the major index components, oil and gold prices have been affected, as increased concerns of slower EU and Chinese economic growth, “exacerbated by potentially increasing trade frictions,” contributed to a stronger U.S. dollar, says Rhind.

U.S. benchmark West Texas Intermediate crude oil  and global benchmark Brent crude  were among the commodities that have seen sizable gains this year, with prices up nearly 17% and about 14%, respectively.