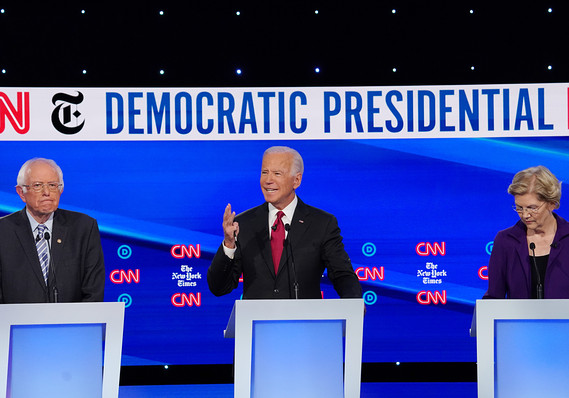 Health-care policy was once again front and center at Tuesday night’s Democratic presidential debate, with the candidates sparring over “Medicare for All” and how they would provide coverage to millions of Americans. Here’s a roundup of some key comments on the subject:

• Sen. Elizabeth Warren was in sharp focus, after being asked whether middle-class Americans would have to pay more in taxes under Medicare for All. She didn’t provide a direct answer but said costs would go up for the wealthy and for big corporations. “I will not sign a bill into law that does not lower costs for middle-class families,” said the senator from Massachusetts.

See: What Medicare for All would do to the health-care sector

• Sen. Bernie Sanders was blunt, saying, as he has in the past, that under his administration taxes would increase to pay for a Medicare for All program. “I do think it is appropriate to acknowledge that taxes will go up,” he said, and “significantly” for the wealthy.

• South Bend, Ind., Mayor Pete Buttigieg favors what he has dubbed “Medicare for all who want it,” which would retain private insurers. He attacked Warren, telling her, “I don’t understand why you believe the only way to deliver coverage for everybody is to obliterate private plans.”

Now read: Kill off the health insurers? Medicare for All is a point of contention in first Democratic debate

• Former Vice President Joe Biden, whose own health-care plan would leave private insurance intact but give Americans the option of enrolling in a Medicare-like plan, was concise: “Build on Obamacare, add a public option,” he said.