Is Germany already in a ‘technical’ recession? These economists think so 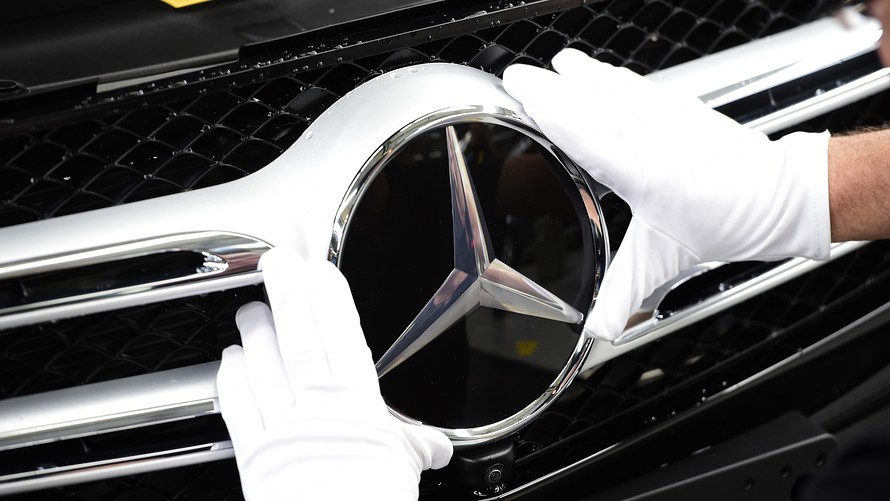 Getty Images
It isn’t all about cars.

Investors are worried that a global slowdown led by China could begin to sap U.S. growth, but it’s Europe that’s looking a little sickly at the moment.

Expectations that Germany, Europe’s largest economy, could post a second consecutive quarter of falling gross domestic product were on the rise after a dismal reading on November industrial production last week, which showed a 1.9% fall, defying a forecast for a 0.3% rise.

“Industrial production data was a proper disappointment this month. Our German GDP tracker has deteriorated to minus 0.1% [quarter-on-quarter]. This would be the second consecutive [quarter-on-quarter] GDP contraction, meaning Germany could now be in a technical recession,” wrote economists Evelyn Herrmann and Gilles Moec at Bank of American Merrill Lynch, in a Monday note (see chart below). 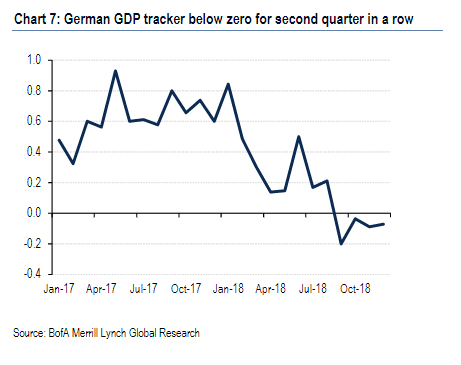 Herrmann and Moec are skeptical the weakness will turn into a full-blown downturn, but others were ringing the alarm bells after the November decline, which was the second consecutive fall and followed data that showed a continued decline in manufacturing orders.

Germany’s slowdown is attributable in part to slowing activity in China, the economists said. And concerns about China are certainly on the rise thanks to homegrown headwinds and the continued trade battle with the U.S. The S&P 500 /zigman2/quotes/210599714/realtime SPX +0.97%  and Dow Jones Industrial Average /zigman2/quotes/210598065/realtime DJIA +0.96%  were feeling modest pressure Monday after a round of weaker-than-expected trade data out of the country.

On Monday, data showed factory output across the eurozone saw its largest annual decline in six years in November and underscored worries the region’s economy isn’t bouncing back from a weak third quarter.

Herrmann and Moec argued that half of the November decline in Germany was due to one-time factors, including the aftermath of a sharp drop in car production in the third quarter that appeared to reverberate through the supply chain in the final quarter of 2018. A slowdown in the chemical sector, due in part to cutbacks by BASF SE /zigman2/quotes/204280060/delayed DE:BAS +1.86%  as a result of low water levels on the Rhine, and a drop in pharmaceutical exports to Ireland after a sharp but difficult to explain run-up from late 2017 through October 2018, were the other factors that may have played a one-time role in the slowdown.

However, “that still leaves a chunky deterioration in underlying growth momentum, not in Germany, but possibly globally,” they said. After stripping out one-time factors, the economists found the slowdown in German output remained slightly below, but within its usual range, around the signal coming from global momentum, which has weakened and suggests growth very close to zero.

The economists argue that a tight labor market, a slightly looser fiscal stance by Germany’s government, a pickup in nominal wage growth and a very tight labor market could ensure that a “technical recession” doesn’t turn into a “downturn proper.”

“The labor market response in this is key,” they said. “Domestic demand should strengthen into 2019 driven by fiscal policy, nominal wage growth and inflation. This should keep labor market pressures intact and keep a proper recession at bay, even if corporate sector profitability could be dented.”

Economists define a recession as a significant decline in activity that lasts more than a few months and stretches across the economy, affecting everything from industrial production to employment, wages and wholesale-retail trade.

A full-blown downturn would require additional shocks, Herrmann and Moec wrote. While not part of their base case, the known risks include Brexit, cars, trade wars and China, they said.

When it comes to China, a major source of concern over the global growth outlook, “data has to stabilize,” they warned, noting that their China-based colleagues expect data to turn better in the first half of 2019 as policy stimulus measures kick in. That’s a big deal for Germany, they said, estimating that the contribution to German GDP from exports to China moved from minus 30 basis points in mid-2015 to positive 60 basis points in early 2017, before slowing to zero in 2018 — a factor that alone explains a large chunk of growth deceleration, they said.