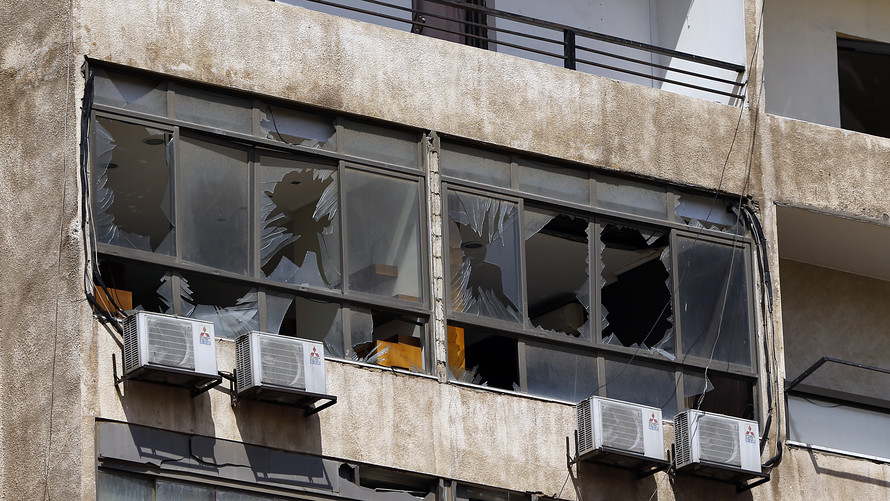 Associated Press
Broken windows are seen on the 11-floor building that houses the media office in a stronghold of the Lebanese Hezbollah group in a southern suburb of Beirut, Lebanon, Sunday.

BEIRUT — The leader of Lebanon’s Iran-backed Hezbollah said Sunday that his group will confront and shoot down any Israeli drones that enter Lebanese airspace from now on, raising the potential for conflict amid heightened regional tensions.

Nasrallah’s speech came after one alleged Israeli drone crashed in a Hezbollah stronghold in south Beirut, landing on the roof of a building that houses Hezbollah’s media office, while another exploded and crashed in a plot behind the building, causing material damage, authorities said.

A Hezbollah spokesman said earlier Sunday that the group did not fire on any of the drones. He said the second drone was likely armed, judging by the damage it caused.

Nasrallah said one of the drones had been flying low among buildings, calling it a military “suicide mission” and “a clear aggression.”

He said allowing Israel to keep flying drones over Lebanon would lead to a similar situation as in Iraq, where a series of attacks there targeting military bases and weapons depot belonging to Iranian-backed militias have left the country on edge. U.S. officials say at least one of them was carried out by Israel.

In Saturday’s strikes near the Syrian capital, Israel publicly stated it was thwarting an imminent drone strike against Israel by Iran’s Revolutionary Guards’ Al Quds Force.

But Nasrallah said the strikes actually hit a Hezbollah rest house, marking a rare acknowledgement of member deaths in Syria by Israeli strikes.

“I tell Israeli soldiers on the border (with Lebanon) to be cautious and wait. Maybe in a day or two or three or four... do not think for a moment that Hezbollah will allow such matters to pass,” he added.

The downed drones and cross-border airstrikes come amid heightened tensions between Israel and Iran, which backs Hezbollah.

He said a second drone, which appeared to have been sent by Israel to search for the first one less than 45 minutes later, exploded in the air and crashed in an empty plot nearby, shattering windows in surrounding buildings.

Residents said they heard a loud blast that triggered a nighttime fire.

There was no immediate Israeli comment on the drone incident or Hezbollah’s remarks.