AN INTERVIEW WITH WALTER PRICE JR. -- He likes the heat. That's why he has chosen to live in the sun-washed golden hills of the East Bay, a couple of micro-climates away from the fog of downtown San Francisco, where his employer, RCM Capital Management, has its headquarters. It's a good thing the Florida native can handle the heat because few sectors are under more pressure than technology these days.

After a strong rebound in 2003, the average tech fund was down 10.25% this year, through the third quarter. And Pimco RCM Global Technology /zigman2/quotes/204706272/composite RCS +1.73% Fund, which has about $500 million in assets, is faring better. It was down 2.96% through the third quarter. It has since gained and is now up 2%.
Indeed, the times have been hard for the fund, which is part of the multimanager series offered by Pimco, a/k/a Pacific Investment Management Co. But Price has seen -- and survived -- such cyclical valleys since 1985, when he began investing in the sector for the outfit, founded by legendary fundamentalist Claude Rosenberg.

Price and co-manager Huachen Chen have run Global Technology since its inception in 1995. What's more, Price, a Massachusetts Institute of Technology graduate, has been a regular participant in Barron's Technology Roundtables, showing a keen talent for finding bottom-up trends.

The veteran money manager has travelled extensively in Asia and Finland this year, which might explain why he continues to bet on wireless telecommunications -- one of the few sectors that have been working in Techland this year.

Q: Why do think we will have a sustained recovery starting next year?
A: You still have pretty low capital spending. If you look at capital spending after depreciation, it has been as low as it has been in 50 years. But you have the cash flow and the balance sheet [improvement] that will allow companies to increase their capital spending again. Capital spending has already peaked for this year, but I think you are moving toward sustained levels of 5% to 10% of corporate technology spending in 2005 and 2006.

Q: What is driving that?
A: We believe that the economy is going to continue to grow at 2% to 4% a year.
That's slower than it has been growing, but it will continue to grow. We believe that capital spending is going to continue to recover because companies still need to reduce their costs and become more efficient. Their revenue growth is slowing, and their competitive environment is more difficult. You can cut employees and cut spending, but at some point you have to start to reinvest.

Q: Have they cut to the bone?
A: The benefits from cutting are behind them, and they have to continue to invest in technology to improve efficiency further.

Q: What is your tech and telecom universe?
A: We look at tech in a broad way. We have some health care. We have energy tech, as well as what people would call conventional tech. But I sort of break down tech into at least four categories: hardware, software and semiconductors, the Internet, and services. I look at the first two as cyclical growth industries with very moderate growth rates, and you really have to pay attention to the cycles in those sectors. The Internet is a secular growth industry, with cycles of competition. Lastly, services are low secular growth.

Q: Everybody is down this year. What happened?
A: People were extrapolating the growth rates that they saw in the fourth quarter of 2003, and you got a lot of enthusiasm. Yet that enthusiasm got tempered most notably in the semiconductor and software sectors. Then interest rates put pressure on valuations in the growth sectors.

Q: Where are you placing your bets?
A: Our favorite holdings focus on the Internet and the wireless area. Those are the two areas that still look pretty good. Qualcomm /zigman2/quotes/206679220/composite QCOM +0.25% and Ericsson /zigman2/quotes/208932705/composite ERIC +2.35% have been the big stocks that have done well.
And the reason for that is you have a new wave of growth associated with 3G [third-generation services] and data wireless. That looks strong and could continue for at least another year or two.

Q: What has worked well for you?
A: We've done well with Research in Motion. We've done okay with Comverse Technology. Ericsson has been a good holding. But we basically missed Qualcomm. We kept thinking we could buy it cheaper, but it never got cheaper.

Q: There are a lot of long-term bears out there on Research in Motion, as Barron's has reported in some skeptical pieces on the company. What drove your conviction?
A: They got profitable, and that was one good sign. The company has gone through a lot of iterations to get where they are. Their success is no accident. They have high penetration in the corporate knowledge-worker market. They have a product they've improved on in terms of battery life and functionality, which is still better than anything that I've seen. That particular market is getting a lot more international and a lot broader. They have a little over a million subscribers, and a much faster network is coming. The cost of the service is getting lower, and we are going to continue to see subscriber growth of the devices that they sell.
They've done a smart thing by licensing their technology to Nokia /zigman2/quotes/207421390/composite NOK +1.42% , Motorola and other companies that can offer lower-end devices that use the [Blackberry] service, and they still get an ongoing licensing fee from the carrier for those products. It's kind of a win-win situation with their licensees, and they will continue to have -- at least for a year or more -- the most attractive product at the high end. 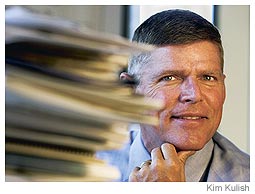 Q: How much can they grow?
A: They are still in a growth mode, having just turned profitable. They have good revenue growth and very rapid earnings growth. They can grow their earnings for a couple more years at 100% a year. You are looking at earnings power of $2 to $3 a share in a couple of years, so the stock could be is worth over $100.