TOKYO—The iconic needle-nosed Japanese "bullet train" could speed through the swampy marshlands of central Florida if Yoshiyuki Kasai , the chairman of Central Japan Railway /zigman2/quotes/205638698/delayed JP:9022 +2.53% Co., gets his way.

Mr. Kasai on Monday announced efforts to bring the shinkansen , Japan's bullet train, to the U.S. JR Central's push to enter the U.S. comes as Washington prepares to announce how $8 billion in federal stimulus money set aside for high-speed passenger-train service is carved up. 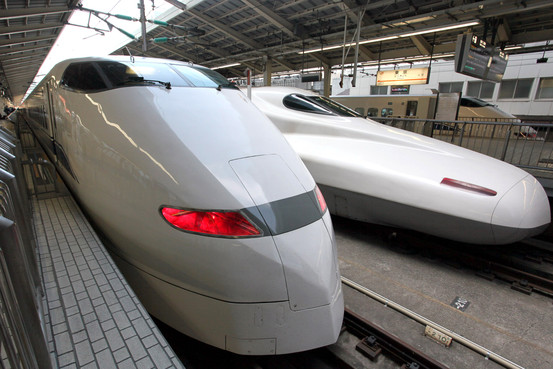 The $8 billion "is oversubscribed by a factor of eight to one," said Richard Lawless , chief executive of U.S.-Japan High Speed Rail, a consulting company JR Central created to market the bullet train. "Of all the corridors we looked at, the one that looks the most promising and immediate is Florida."

The proposed Florida high-speed rail would cost a total of $3.5 billion to construct, including rolling stock, JR Central said.

Congress attached "Buy America" provisions to the stimulus spending aimed at favoring U.S. firms. But JR Central has structured its package in the hopes of meeting those provisions. Officials from U.S.-Japan Maglev, another JR Central consulting company, said they would ask Florida companies to construct the infrastructure for the train, including the signals and track. Part of the rolling stock, or cars, would be built in the U.S. by U.S. companies.

JR Central is marketing two types of high-speed technology: the shinkansen, which travels as fast as 330 kilometers per hour; and the magnetic-levitation, or maglev, train, which can run up to 581 kph , but is more expensive and in only limited use so far.

Speeding Up Review the routes vying for government funds.

JR Central has hired two executives with defense experience to head its two Washington consulting firms, which will lobby on Capitol Hill on behalf of the Japanese rail group. Mr. Lawless worked at the Central Intelligence Agency for 15 years and was deputy undersecretary of defense for Asian and Pacific affairs under President George W. Bush from 2002-2007.

The Japanese rail system is renowned for its efficiency, speed, punctuality—trains arrive to the minute—and its impeccable, white-gloved conductors who bow to passengers as they board and depart trains.