U.S. adds 224,000 jobs as hiring rebounds in June, calming worries about the economy

Unemployment edges up to 3.7% as more people look for work 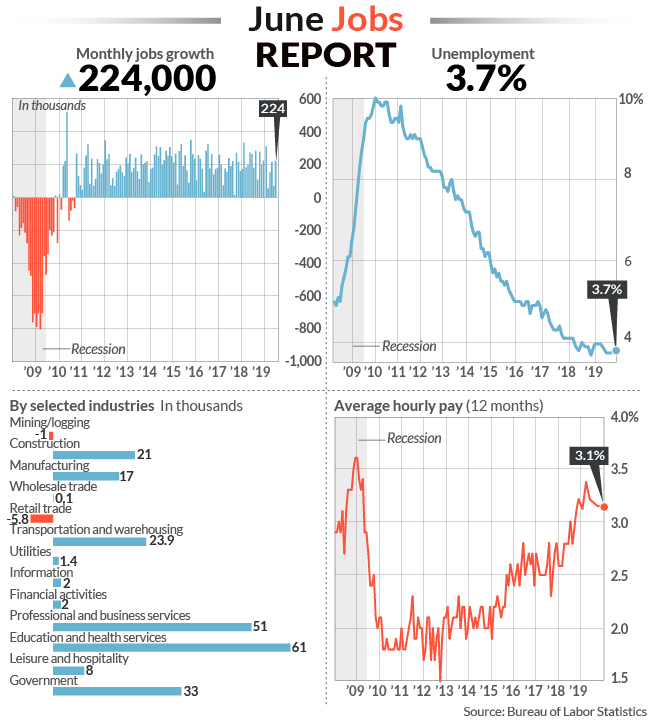 The numbers: The U.S. added a robust 224,000 new jobs in June, rebounding from a recent lull and calming worries about the health of an economy now entering a record 11th year of expansion.

The increase in new jobs easily beat the 170,000 forecast of economists polled by MarketWatch.

Improved hiring last month dispels for now the threat of a dramatic slowdown in growth for an economy that just this month set the record for longest expansion ever. Ongoing U.S. trade disputes and a faltering global economy have dampened exports, wounded American manufacturers and undermined the confidence of businesses and consumers.

The U.S. and China — the world’s two largest economies — agreed last week to delay pending tariffs and return to negotiations given the high stakes involved.

The unemployment rate, meanwhile, edged up to 3.7% from 3.6% as more than 300,000 people entered the labor force in search of work, the Labor Department said Friday .

Unemployment is still near a 50-year low, however.

The stock market /zigman2/quotes/210598065/realtime DJIA +0.08%   /zigman2/quotes/210599714/realtime SPX +0.33% fell in early Friday trading. Stocks have surged to record highs in the past few weeks on relaxed trade tensions with China and hopes the Fed would lower interest rates, but now a rate cut might be more in doubt.

What happened: The increase in hiring last month was widespread.

Professional firms hired 51,000 people, health-care providers added 35,000 jobs and transportation and warehouse companies boosted payrolls by 24,000. Shippers have been steadily adding jobs for years amid a boom in online shopping.

Retailers had no such luck: They shed another 6,000 jobs to continue a recent string of declines. Local-government hiring led to a 33,000 surge in public-sector payrolls.

The average wage paid to American workers rose 6 cents to $27.90 an hour. The 12-month rate of hourly wage gains was unchanged at 3.1%.

Wage growth has tapered off recently despite the tightest labor market in decades, suggesting most workers have gained limited power in wresting higher pay from employers. Firms are also resorting to more automation to speed up production, keep costs down and get around a shortage of skilled labor.

Big picture: Even though the economy has slowed, the strongest labor market in decades is likely to extend what’s already the longest expansion on record. The U.S. has grown for 121 straight months.

The biggest danger to the U.S. is that trade tensions with China could hurt the economies of both countries and cause a global downturn. Businesses have complained for months that trade disputes have hampered their ability to plan and invest.

What they’re saying: “The jobs growth number this month is comforting after a few months of uncertainty. While job growth may be slowing down from its astonishing rate last year, it’s reassuring that the economy is still creating jobs at a reasonable pace,” said Martha Gimbel, director of economic research for the Indeed Hiring Lab.

““With May’s disappointing report behind us, those who have been watching for indications of an near-term economic slowdown should take note that neither job nor wage growth have slowed to a point of concern yet,” said Bob Baur, chief global economist at Principal Global Investors.

Read: Robots are coming for your jobs — Oregon, Louisiana, Texas have most to lose