Contrasting recoveries in home equity and mortgage debt say a lot about why homeownership is still complicated.

Years after the housing market imploded, home equity held by U.S. homeowners is closing in on its previous peak even as the total amount of mortgage debt outstanding remains well below past highs.

It’s good news that homeowners have spent the years since the crisis repairing their balance sheets—and that lenders are more prudent. But with the homeownership rate falling to a 51-year low, it’s worth a closer look at the story behind the levels of debt and equity, shown on this chart. 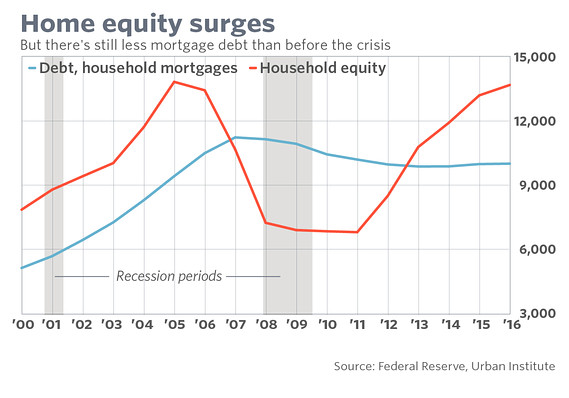 There are many reasons equity rebounded. Home prices nationally have nearly regained their earlier peak: in May, Case-Shiller’s national Home Price Index was just 2.1% shy of the 2006 high.

Equity is also more concentrated. The existing inventory of mortgage debt outstanding has aged over the past decade as buying and selling slowed. That means mortgage payments are further along in the amortization process, so principal, rather than interest, is being paid down.

As the Urban Institute has shown, homeowners 65 and above had 44% of what Urban calls “accessible housing wealth”—the 75% of home equity that can be tapped—despite owning only 30% of the units. That makes sense, since those people are more likely to have paid down more debt.

The reasons mortgage debt growth has stalled, however, are completely different. Even as more than 6 million homes were lost to foreclosure, lenders have clamped down on new mortgages.

Urban researchers found that credit tightened further in the first quarter of this year from the last three months of 2015. In a July note , they said their measure of how many mortgages are likely to default—an indication of lenders’ standards—fell between the end of last year and March, and was at half its 2001-2003 levels.

Laurie Goodman, a co-director of Urban’s Housing Finance Policy Center, told MarketWatch that the tightening was likely a temporary blip, and that the mortgage market is “generally on the way to flat to loosening.”

While supply of mortgages may pick up slightly, demand remains a question. The homeownership rate slid 0.6 percentage point to 62.9% in the second quarter, the Census Department said Thursday .

Goodman believes the homeownership rate will continue to decline. “I’m surprised at how quickly it’s happening,” she said.

There are many reasons for lower levels of homeownership, Goodman said, including delayed marriages, higher student loan debt for those who don’t graduate, flat incomes since the recession, and what she calls “a subtle shift in attitudes” toward homeownership.