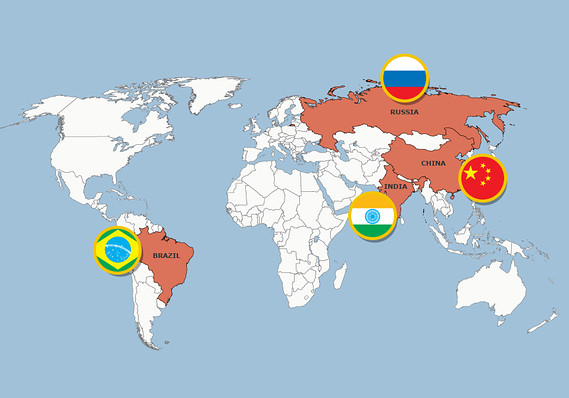 Few investment concepts caught fire as quickly and convincingly as the "BRICs" — a catchy shorthand for the fast-growth economies of Brazil, Russia, India and China.

Coined by ex-Goldman Sachs economist Jim O'Neill in 2003, the BRICs epitomized the shift in global economic power away from the developed economies of the U.S., Europe and Japan toward these new stars of global economic universe.

Looking at the big picture, the rise of the BRICs was not just inevitable. It was already a done deal.

Taken together, the BRICs encompass more than 25% of the world's land mass and 40% of the world's population. And the combined Gross Domestic Product (GDP) of the BRICs comfortably exceed that of the United States. Adjust for Purchasing Power Parity (PPP), and the BRICs already account for 52% of the planet's GDP.

After the financial meltdown of 2008, investors flocked to the BRICs favoring them over stagnant, developed economies like Old Europe, aging Japan and the politically fractious and indebted United States. Not unreasonably, investors expected the value of their portfolios to rise with the prospects of these newly anointed kings.

Today, U.S. markets trade within striking distance of their all-time highs. In contrast, the MSCI BRIC Index languishes 48% below its 2007 peak — the year the iPhone was launched and George Bush was still president. This year has been particularly unkind to BRIC investors.

Below is a quick look at how the BRICs have fared in the recent market turmoil.

The Chinese stock market has been in the headlines often of late, collapsing pretty much as I had predicted in early June .

The latest news is that the Chinese government has thrown in the towel on supporting the stock market in a $200 billion spending spree funded by the central bank, local brokerages and commercial banks. Attention has shifted to Chinese journalists, who now are "confessing" to writing stories that stoke panic in the markets .

No wonder the "this time it's different" conviction that seemed to undergird China's dominance in the world has waned along with the size of investors' portfolios in the Chinese markets.