Yellow metal could push toward $1,850 an ounce: ABN Amro 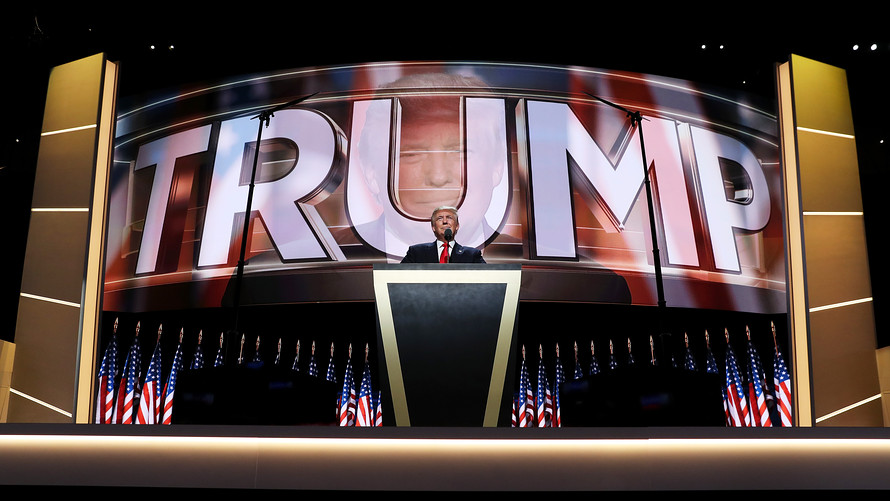 The notion that stocks are enjoying a Donald Trump–inspired rally doesn’t pass the sniff test. Gold, however, might be another matter, if the Republican nominee ends up winning the White House, analysts say.

‘If Trump were to become president, gold prices will likely perform well, because we expect that his policies will be inward looking and will weaken the fundamentals of the U.S. economy.’

Trump’s pledge to tear up trade agreements and a rise in overall uncertainty over the policy outlook would likely dent the U.S. economy while spurring a rise in demand for gold, said Georgette Boele, a currency and precious-metals analyst at ABN Amro, in a Friday note.

To be sure, Boele’s forecast is based on highly pessimistic expectations in regard to Trump’s likely economic polices.

“If Trump were to become president, gold prices will likely perform well, because we expect that his policies will be inward looking and will weaken the fundamentals of the U.S. economy,” Boele said. “In addition, his rhetoric and possibly policy actions could create domestic and international uncertainty at best, and upheaval at worst.”

Read: American pessimism hasn’t grown this much since the financial crisis

In the note, Boele takes a look at gold’s performance during past presidential administrations stretching back to Gerald Ford’s in 1974. She found that while gold was “very sensitive” to changes in inflation through the early 1990s, the yellow metal’s performance since the Clinton administration has been dictated by a wider range of forces (see table below). 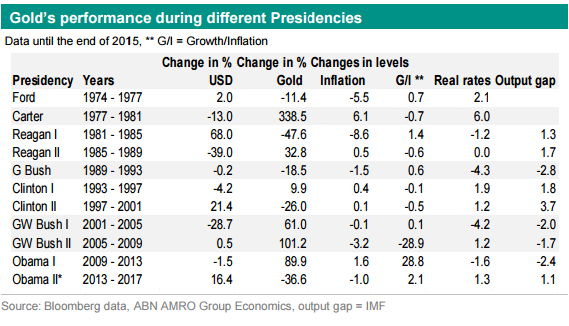 During Obama’s second term, improvement in the output gap — the difference between an economy’s actual output and its maximum potential output — and a rise in U.S. real yields (yields minus inflation), along with a sharp rally by the U.S. dollar, sent gold tumbling between 2013 and 2015, Boele said. A deterioration of U.S. real yields and haven demand amid geopolitical shocks have allowed gold to rebound this year.

Boele is bullish on gold overall, forecasting a smaller rise toward $1,650 an ounce if presumptive Democratic nominee Hillary Clinton wins in November. Gold would find support due to inflation outpacing growth, forecasts for interest rates to remain negative (though less negative than at present), and a longer-term downtrend for the U.S. dollar.

See: 5 things to know about Tim Kaine, whom many expect to be named Clinton running mate on Friday

Boele isn’t the only analyst who sees more pronounced upside for gold under Trump. Julian Phillips, founder of Goldforecaster.com, agreed that a Trump presidency and a push toward “protectionism” would be negative for growth and “disruptive and divisive for the global economy.”

In addition, a President Trump would rapidly accelerate the transformation of the global monetary system away from its reliance on the U.S. dollar to a multicurrency framework.

“The need for gold in ‘official’ hands will grow in such an environment to smooth out the ruptures in cash flows between nations across the world,” he said, adding that silver would also likely benefit.

ABN Amro’s Boele, however, offered one caveat. Gold could sell off sharply in the unlikely event that U.S. real yields rise and the growth/inflation mix and the output gap see dramatic improvement. That scenario could lead the Federal Reserve to hike rates aggressively amid strong, above-trend U.S. growth.