How one bad tweet can change your life forever

Employers are on high alert in this polarized political climate 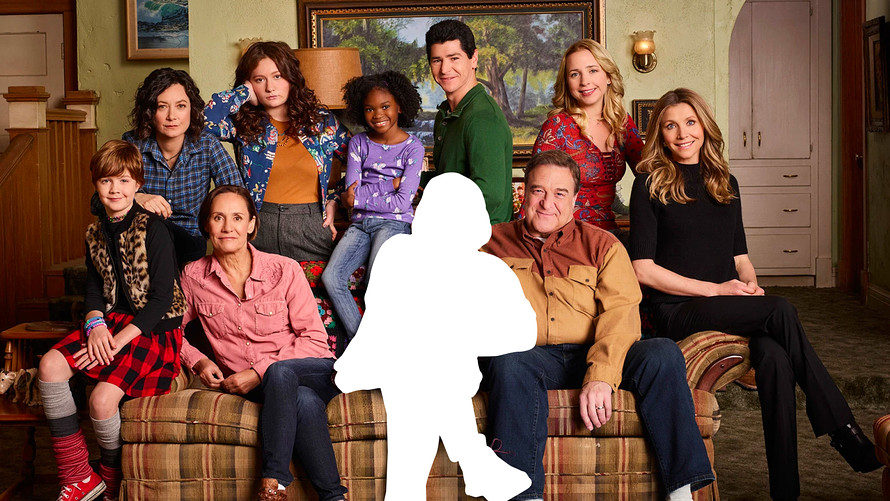 MarketWatch photo illustration/ABC
‘The Conners,’ a spinoff the wildly successful reboot of ‘Roseanne,’ will premiere Tuesday on ABC without Roseanne Barr.

If you use Twitter, you too are a public figure. One egregious tweet could blow up your life.

On Tuesday, ABC /zigman2/quotes/203410047/composite DIS -1.15%  will reboot a reboot. “The Conners,” a spinoff the wildly successful reboot of “Roseanne,” will premiere without Roseanne Barr. Last May, the star wrote a racist tweet about Valerie Jarrett, a former adviser in Barack Obama’s White House. Barr apologized, but the damage was done. Several members of her cast and ABC executives denounced her, and she eventually signed away her rights to the show to allow it to continue.

Also Tuesday, Mary Bono, who took over as interim president and CEO of the USA Gymnastics Federation just four days ago, resigned after a tweet came to light in which she criticized Nike, a U.S. Olympic Committee sponsor, and appeared to throw shade at the company’s advertising campaign featuring football player Colin Kaepernick. The NFL player has made a point of kneeling during the National Anthem before games to show his support for Black Lives Matters.

Next to a photo of her Nike /zigman2/quotes/203439053/composite NKE -0.41%  shoe, Bono wrote, “Playing in a charity golf tournament raising money for our nation’s Special Forces operators and their families. Unfortunately had these shoes in my bag. Luckily I had a marker in my bag too...”

Barr and Bono’s tweets should be a cautionary tale to anyone with a Twitter account, experts say. Roseanne’s firing came some 11 hours after she sent the original tweet. The swiftness of ABC’s response is a testament to diversity in the C-suite and the speed with which news travels on social media, says Aram Sinnreich, professor of communications at the American University, Washington, D.C.

This wasn’t Barr’s first racist tweet . So why now? “In the Trump age, the news cycle has accelerated so quickly that there’s a vanishingly small window for commercial entities to get out in front of these damaging public relations incidents,” he said. “The ability to bury these kinds of stories has diminished to almost zero.”

The political climate puts all employers on high alert when it comes to the words and behavior of their employees.

The political climate is putting all employers on high alert when it comes to the words and behavior of their employees, Sinnreich says. “We’re understood to be private citizens, but when someone is the public face of a public corporation, that corporation should and must be held accountable for the actions of that individual,” he added.

Sinnreich says some people are frustrated with the lack of consequences when President Trump tweets racially-tinged comments. “Until the president is held accountable for the outrageous volume of hate speech that he generates, proxies are going to continue to come under the gun.” (President Trump has made incendiary remarks about Mexicans, Haitians and Nigerians .)

Last month, the U.S. Securities and Exchange Commission filed suit against Elon Musk, arguing that he misled investors when he proclaimed on Twitter in August that he was considering taking Tesla /zigman2/quotes/203558040/composite TSLA -2.23%  private and had secured the funding to do so. He too was almost effectively fired.

Under an agreement reached with the SEC, Musk agreed to relinquish his role as chairman, but keep his role as CEO. Musk and Tesla will each pay a $20 million fine to investors who lost money. (Musk has since decided to keep the company public.)

Tweets can also be costly. On Monday, Stormy Daniels, who says she was paid $130,000 as part of a non-disclosure agreement after an alleged affair with President Trump, lost a defamation suit against the president, who tweeted that Daniels’ claim that she had an affair with him was a “total con job.”

Judge James Otero, a U.S. District Court judge in Los Angeles, said the president’s tweet appeared to be an opinion protected by the First Amendment. Daniels, whose real name is Stephanie Clifford, was ordered to pay Trump’s legal fees. (Her lawyer, Michael Avenatti, said he will appeal.)

Also see: Why millions of Americans are lonely

Workers are plugged into the news cycle. That does not mean you should share all your opinions on social media.

It’s tempting for employees to get mad about something and fire off 280 characters, or less. Many people are plugged into the news cycle all day long. One in five employers think their employees are productive fewer than five hours a day, with most citing smartphone use as the culprit, a 2016 CareerBuilder report of hiring managers found.

That does not, however, mean you should share all your opinions on social media. The First Amendment protects free speech and, in President Trump’s case, negative comments about third parties, but it may not protect your job if you do or say anything that is contrary to the company’s values, even if it’s a joke. In employment-at-will states, employees without a contract can be fired without cause.

“Twitter is today’s PR Newswire,” says Donna Francavilla, a communications specialist in Birmingham, Ala. “We think we’re talking to our followers and we think they’re all loyal to us and, if we issue an opinion, they’ll agree.” That’s not the case, she said. Often times, many people who follow Trump, for instance, may disagree with his views.

“It never used to be that way,” Francavilla said. “Social media used to be just you and your friends. But we’re now using this new megaphone to express our ideas to a much larger audience.” Anyone with a public Twitter account is a de facto public figure, she added. “We have to be mindful of every word we speak and everything we write.” 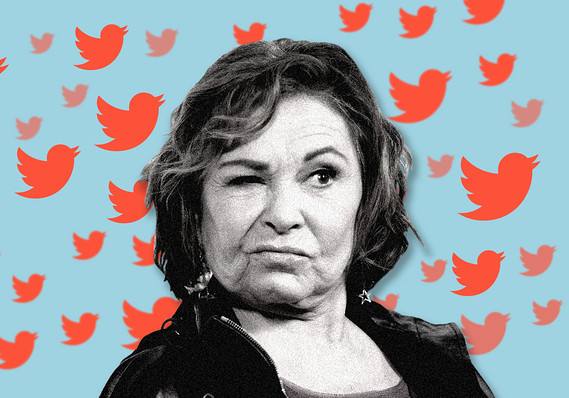 MarketWatch photo illustration/Getty Images
The ‘Roseanne’ cast will go on without her.

There have been some infamous cases. In December 2013, Justine Sacco, a PR executive for InterActiveCorp, /zigman2/quotes/205118493/composite IAC +0.63%  which runs dating websites Match.com and OkCupid, was fired after tweeting offensive comments about AIDS in Africa, before stepping on a plane to go there. Her tweet went viral while she was on the long-distance flight.

IAC said at the time: “The offensive comment doesn’t reflect the views and values of IAC.” Sacco later apologized “for being insensitive to this crisis,” and later said the tweet was intended to be satirical. She left IAC in January 2014 and returned in January 2018 as vice president of communications at Match Group .

There have been some infamous cases of people being fired for tweeting, even when they said it was satire.

Anthony Weiner, the former Democratic congressman for New York, last year began a 21-month prison sentence for sexting with a minor. But he first resigned in June 2011 after sending a sexually explicit photo of himself to a college student over Twitter.

At first, Weiner claimed that his account was hacked. While he lost his $174,000-a-year job — the standard salary for members of the House and the Senate — he walked away with the equivalent of around $1.2 million in retirement benefits after just a dozen years in office. He later expressed remorse: “These destructive impulses brought great devastation to family and friends, and destroyed my life’s dream of public service,” he said .

Don’t miss: Ambien maker responds to Roseanne: Racism is ‘not a known side effect’

Even posting photographs or retweeting someone else’s tweet can be enough to get fired. Despite repeated warnings, people still get fired for sending an inappropriate photo or tweet. The problem with sites like Twitter and Instagram is that immediacy and informality are also social media’s greatest dangers, experts say.

And in many cases, there’s no turning back once you hit “send” and there are plenty of reasons not to. Case in point: Five workers on a dam in Oroville, Calif., were fired earlier this year for taking photos of the dam and posting them on Instagram despite a strict no social media and no photos policy at the site.

Also see: How America has changed since ‘Roseanne’ premiered in 1988

Employees often say their opinions do not reflect those of their company, but sometimes even that’s not enough.

“Sooo does anyone else not open Snapchat anymore? Or is it just me... ugh this is so sad,” Jenner tweeted to her 25.5 million Twitter followers. It was liked 374,555 times. Jenner, regarded by her fans as an arbiter of what’s not and what’s not, heard. Snapchat stock dropped 6% or $1.3 billion, also in part over its decision to redesign its interface. Jenner later tweeted , “still love you tho snap ... my first love.”

In fairness to American workers, it’s a double-edged sword: They’re often times encouraged to tweet and maintain an active social media presence. And employees, particularly those who are in the public eye, are often judged by how many followers they have on Twitter when they apply for jobs.

The role social media plays in workers’ lives is “ not always clear-cut ,” the Pew Research Center, a nonprofit think tank in Washington, D.C., found. Companies, in the meantime, must remind employees to state that their opinions do not reflect those of their company. But when it comes to crossing a line — whether it’s racism, homophobia or sexism — such caveats may not enough.

“This is not censorship,” Sinnreich says. “It’s about affiliation and the media’s role as amplifiers for political ideology.” As long as people tweet, he says, “these stories will keep happening.”