The black-white wealth gap is fueled by student debt 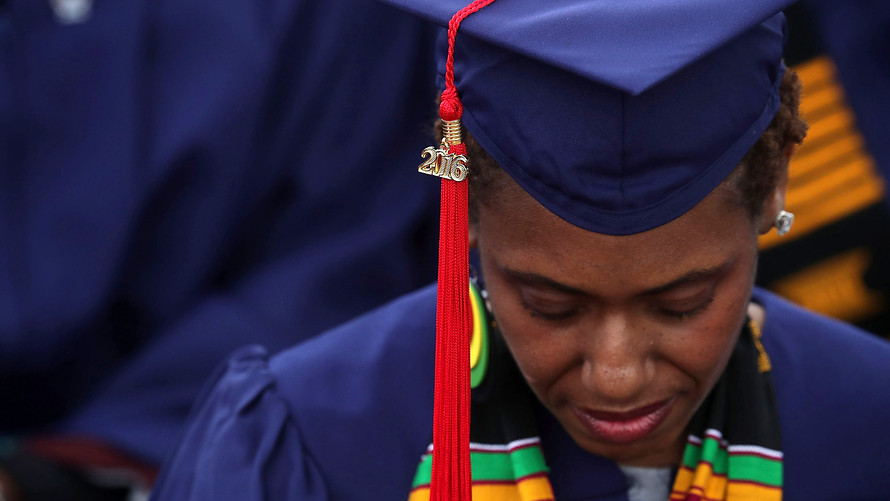 Getty Images
It’s become increasingly clear over the past several years that black student-loan borrowers take on more debt than their white counterparts and struggle to repay it.

Student debt is becoming a nearly-universal American experience, but the particulars of that experience can vary widely depending on the color of your skin.

It’s become increasingly clear over the past several years that black student-loan borrowers take on more debt than their white counterparts and struggle to repay it. But new research sheds light on the different trajectories of black and white students during the college-going and student-loan borrowing experience, and the disparate impacts it has on their financial well-being.

“Student debt is going to contribute to the ongoing persistence of the racial wealth gap,” said Fenaba Addo, a professor of consumer science at the University of Wisconsin-Madison and one of the authors of the working paper. “These disparities are large and then they grow over time.”

Indeed, the study finds that the gap in student debt held by black and white borrowers grows by 6.8% each year. As a result, black young adults hold 10.4% less wealth on average than their white counterparts due to differences in student-loan debt.

The working paper is the latest research to indicate that our college financing system, which increasingly requires that families rely on debt to pay for school, is contributing to inequality.

The processes that students use to both accumulate and pay down debt “are racialized,” Addo said. The racial wealth gap means that black students likely have less wealth to draw on when paying for college than their white counterparts, meaning they typically need to rely more on debt to pay for school.

Compounding those challenges, black students are also more likely to be “funneled or preyed upon” by for-profit colleges, Addo said, which tend to have worse outcomes.

Even in the case of nonprofit schools, other research indicates that black students are more likely to end up at less selective schools with fewer resources to help them graduate with a credential worth more in the labor market.

All of this combines to mean that when black students leave college, they tend to have more debt and worse prospects than their white counterparts. But the gulf in wealth between black and white student-loan borrowers seems to really accelerate during the early repayment period, the paper found, as white young adults pay their debt down much faster than black young adults.

The challenges that black young adults face in the labor market likely explain in part why they pay their debt down slower, Addo said. Young black adults struggle more than their white counterparts to get a decent paying job both because they’re more likely to have degrees from institutions that are worth less in the labor market and because of employment discrimination , Addo said.

But black 20- and 30-somethings may also be falling behind during the repayment process because they’re less likely than white borrowers to have family wealth to draw on—in the form of help with loan payments, rent or other financial assistance—to knock out their debt, Addo said.

All of this adds up to mean that student debt is becoming a major part of what’s putting the black middle class in an economically precarious position, Addo said.

“We know that there are risks associated with pursuing a higher education,” she said, noting that we ask young adults to take time out of the labor force and invest in themselves for several years. And given that the bulk of college students need to take on debt to afford school, there’s a financial risk as well.

“Those risks seem to be borne disproportionately by black young adults,” Addo said. “They’re doing what we’re telling them to do, but they are still economically vulnerable.”