How to profit from the bear market in gold 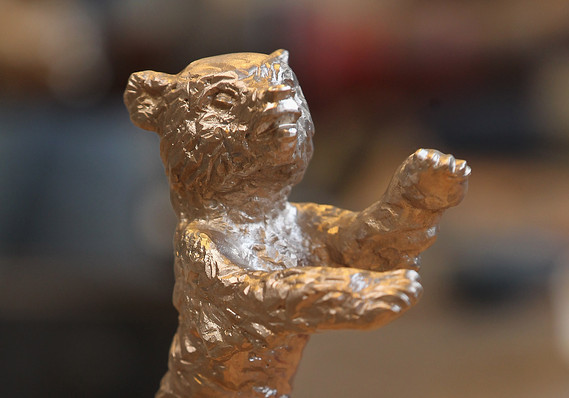 Is there a way to potentially take profits out of the consistent, (and likely to continue) slide in gold prices? This corner says yes.

The gold in gold bugs

The great thing about gold for open-minded traders is that there will always be gold bugs. No matter what the markets do, what the economy is like, what the geopolitical situation is, to gold bugs, it's always a good time to be buying gold. Companies that peddle gold coins and gold bullion do a good job of convincing the public of this idea.

Gold typically performs best in times of inflation or a weak dollar. It can also be a safe-haven investment in times of uncertainty. The keyword here is can be.

Many will argue we are in times of great uncertainty. Maybe so. But one thing not uncertain is the strength of the dollar.

While global investors used to flock to gold in times of anxiety, this time around, they're flocking to U.S. Treasurys and the U.S. dollar for safety. This puts further pressure on gold. Gold bugs, however, disregard this reality. This "always bullish" mentality is what keeps healthy premium in gold calls available much of the time.

While the rest of the world struggles with stagnant or slowing growth and outright recession and acts to add stimulus to their economies, the U.S. is expected to raise interest rates this month.

The U.S. recovery, while sloppy and underwhelming, has still been enough to make us the best of the worst vs. the rest of the world. Thus, the dollar has strengthened against other major currencies.

The markets have been expecting the Fed to raise rates for months now. The fact that it hasn't happened yet has not hampered the dollar's ascent. Some argue that the Fed actually pulling the trigger this month could be a case of buy the rumor, sell the fact.

We don't think so. While a rate increase could bring some profit taking from dollar longs, it's hard to see a U.S. rate increase as anything but longer-term bullish for the dollar. Should the Fed back off in December, the expectation will likely be for the increase to come in early 2016. Thus, either way, the longer-term forces driving the dollar don't look to reverse dramatically any time soon.

The trend is still your friend

Dollar bears argue that the market could be approaching a top. But the global economy doesn't suggest so much. 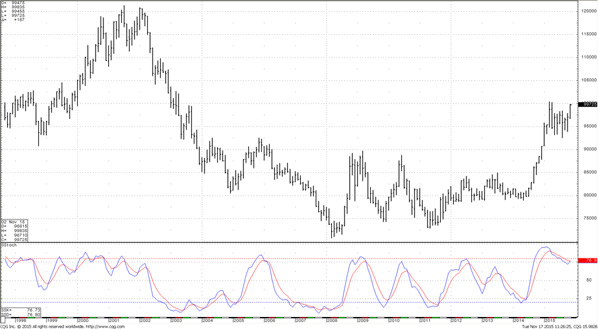 Nor does the monthly chart.

The monthly U.S. dollar chart (above) seems to be reflecting a classic William O'Neil "cup and handle" formation. If Mr. O'Neil's forecasting model is correct, a substantial move higher in the dollar could be on the way.

What is the end result of dollar strength and the global "risk off" vibe toward asset purchases? A stubborn downtrend in gold since 2012. And while limited rallies are to be expected, this overall trend seems likely to continue. 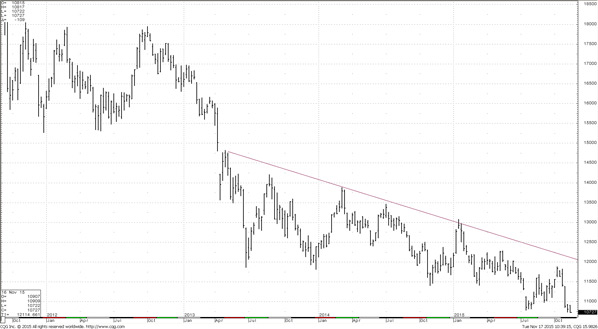 Weekly chart shows gold entrenched in a stubborn downtrend since 2012. The economics of gold make this trend likely to continue. 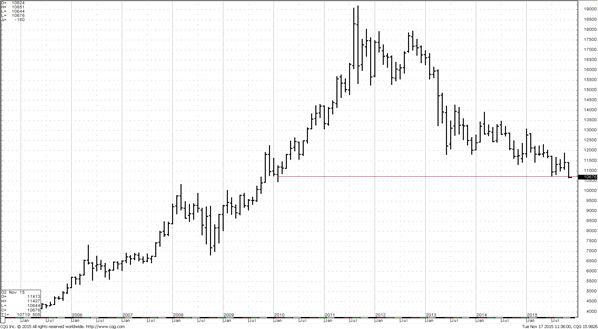 Gold prices have broken below major support on the monthly chart.

While gold will continue to have technical corrections, the there does not seem to be an impetus for a major trend change in gold in the immediate future.

We view any strength in gold prices this month as selling opportunities. While we recommend a call selling strategy to our clients, futures traders can look to short gold on limited December price strength. Look for a post-Fed announcement rally as an opportunity for shorts.