Hundreds of homes burn as wildfires sweep across Pacific Northwest 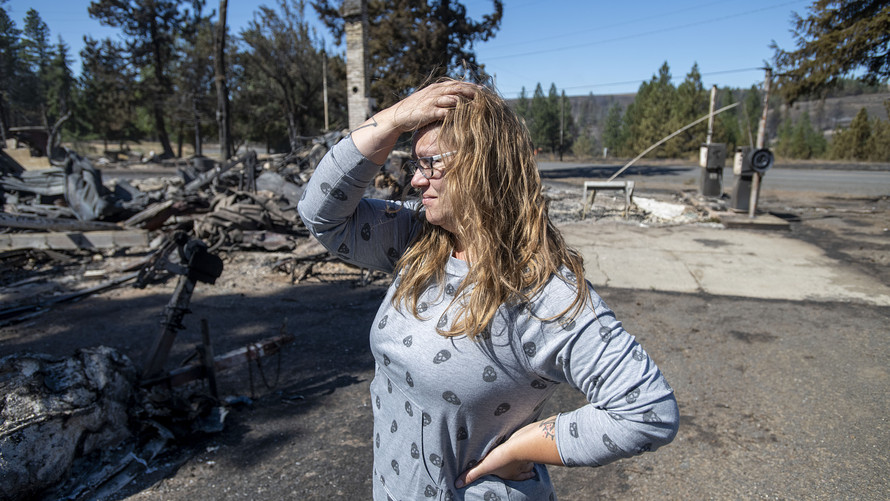 Associated Press
Hollie Jordan surveys her father's service station that was destroyed by a wildfire on Tuesday in Malden, Wash. "This was filled with work and life and memories and it's all gone," said Jordan.

ESTACADA, Ore. — Deadly windblown wildfires raging across the Pacific Northwest destroyed hundreds of homes in Oregon, the governor said Wednesday, warning it could be the greatest loss of life and property from wildfire in state history.

The blazes from the top of the state to the California border caused highway closures and smoky skies and had firefighers struggling to contain and douse flames fanned by 50 mph wind gusts. Officials in some western Oregon communities gave residents “go now” orders to evacuate, meaning they had minutes to flee their homes.

Fires were burning in a large swath of Washington state and Oregon that rarely experiences such intense wildfire activity because of the Pacific Northwest’s cool and wet climate.

Flames trapped firefighters and civilians behind fire lines in Oregon and leveled an entire small town in eastern Washington. Oregon Gov. Kate Brown warned that the devastation could be overwhelming from the fires that exploded Monday during a late-summer wind storm.

“Everyone must be on high alert,” Brown said. The blazes were thought to be extremely destructive around Medford, in southern Oregon, and near the state capital of Salem.

“This could be the greatest loss of human life and property due to wildfire in our state’s history,” the governor said.

At least three people were killed in Oregon fires and a small child died in blazes in Washington state. Brown said some communities were substantially damaged, with “hundreds of homes lost.”

The precise extent of damage was unclear because so many of the fire zones were too dangerous to survey, said Oregon Deputy State Fire Marshal Mariana Ruiz-Temple.

“Quite frankly, we are not even able to get into these areas,” she said.

In Washington, a 1-year-old boy died after his family was apparently overrun by flames while trying to flee a wildfire in the northeastern part of the state, Okanogan County Sheriff Tony Hawley said Wednesday.

The child’s injured parents were discovered in the area of the Cold Springs Fire, which is burning in Okanogan and Douglas counties, Hawley said. They were transported to a Seattle hospital with third-degree burns.

KOIN reported a boy and his grandmother died in a wildfire near Lyons, Oregon. Marion County Sheriff Joe Kast confirmed two fatalities but had no other details. He said they would likely “not be the only ones.” Lyons is in Marion County.

The Mail Tribune in Medford reported that Jackson County Sheriff Nathan Sickler confirmed at least one death and a criminal investigation at the origin point of a wildfire that started near Ashland in southern Oregon.

“We are still in the early stages,” Sickler told the newspaper. “Nothing’s been ruled out.”

Another wildfire hit Lincoln City, on the Oregon coast, where residents were being evacuated to a community college to the south.