Hundreds of thousands ordered to flee Gulf Coast ahead of Laura

The National Hurricane Center projected Laura would become a Category 3 hurricane before making landfall late Wednesday or early Thursday, with winds of around 115 mph (185 kph) 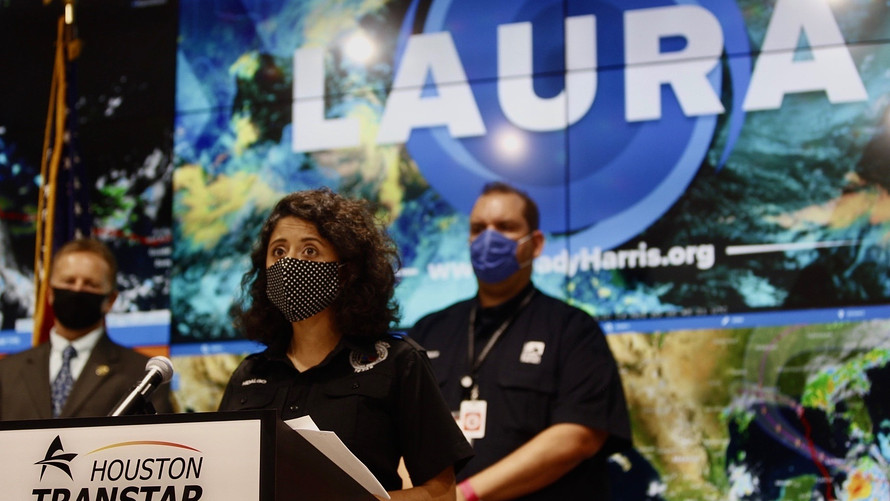 AP
Judge Lina Hidalgo emphasized that Laura should not be compared to past hurricanes like Harvey while addressing the media from Houston Transtar on Monday, Aug. 24, 2020.

Hundreds of thousands of people were ordered to evacuate the Gulf Coast on Tuesday as Laura strengthened into a hurricane that forecasters said could slam into Texas and Louisiana as a major storm with ferocious winds and deadly flooding.

More than 385,000 residents were told to flee the Texas cities of Beaumont, Galveston and Port Arthur, and still more were ordered to evacuate low-lying southwestern Louisiana, where forecasters said as much as 13 feet (3.96 meters) of storm surge topped by waves could submerge entire communities.

The National Hurricane Center projected that Laura would become a Category 3 hurricane before making landfall late Wednesday or early Thursday, with winds of around 115 mph (185 kph) capable of inflicting devastating damage.

“The waters are warm enough everywhere there to support a major hurricane, Category 3 or even higher. The waters are very warm where the storm is now and will be for the entire path up until the Gulf Coast,” National Hurricane Center Deputy Director Ed Rappaport said.

Ocean water was expected to push onto land along more than 450 miles of coast from Texas to Mississippi. Hurricane warnings were issued from San Luis Pass, Texas, to Intracoastal City, Louisiana, and storm surge warnings from the Port Arthur, Texas, flood protection system to the mouth of the Mississippi River.

There was little to keep Laura from turbocharging. Nearly all forecasts showed rapid strengthening at some point in the next couple of days.

Laura passed Cuba after killing nearly two dozen people on the island of Hispaniola, including 20 in Haiti and three in the Dominican Republic, where it knocked out power and caused intense flooding. The deaths reportedly included a 10-year-old girl whose home was hit by a tree and a mother and young son crushed by a collapsing wall.

On top of storm surge that could penetrate miles inland, as much as 15 inches (38 centimeters) of rain could fall in some parts of Louisiana, said Donald Jones, a National Weather Service meteorologist in Lake Charles, Louisiana — near the bullseye of Laura’s projected path.

On Grand Isle, Nicole Fantiny said she planned to ride out the hurricane on the barrier island along with a few dozen other people.

“It could still change, but we keep on hoping and praying that it keeps on going further west like it’s doing,” said Fantiny, who manages a restaurant on the island.

Marco, a system that approached land ahead of Laura, weakened into a remnant just off Louisiana’s shore on Tuesday. Satellite images showed a disorganized cluster of clouds, what meteorologists call “a naked swirl,” Jones said.

Meanwhile, Laura powered up. The crew of a hurricane hunter plane confirmed that Laura became a hurricane with top winds of 75 mph winds (120 kmh) shortly after passing between the western tip of Cuba and Mexico’s Yucatan Peninsula.

The hurricane center warned people not to focus on the details of the official forecast since storm surge, wind and heavy rain will extend far from Laura’s center.

In Galveston and Port Arthur, Texas, mandatory evacuation orders went into effect at 6 a.m. Tuesday. People planning on entering official shelters were told to bring just one bag of personal belongings each, and a mask to reduce the spread of coronavirus.