LONDON (MarketWatch) — If you’re on the hunt for yield, consider looking in Europe, where plenty of companies are “catering” to yield-hungry investors, according to Goldman Sachs.

High-yielding dividend stocks are regaining popularity as global yields on fixed-income assets decline this year, and there is opportunity in companies in Europe with such stocks, the broker noted.

“Companies are cash rich and likely to boost spending. However, with fewer investment opportunities, we expect them to increase cash returns more, via higher dividend payout ratios and continued growth in buybacks,” said Goldman analysts, led by Christian Mueller-Glissmann, in the Monday report. 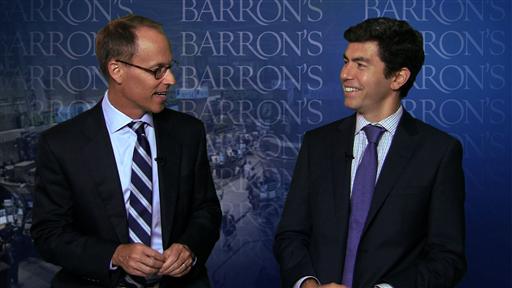 High-yield bonds have gotten hammered recently, which might have created an opportunity, especially for ETF investors. Still, weakness in junk could augur tough times ahead.

There are signs of recovery in Europe’s M&A space so far this year, but overall, investment opportunities are still on the lean side, they went on to say. That makes European companies likely to increase cash returns more, through higher dividend payout ratios and continued growth in buybacks.

More than half of the companies on the Stoxx Europe 600  (STOXX:XX:SXXP) now have dividend yields that are above European corporate-bond yields.

Dutch retailer Royal Ahold , advertising and PR firm Publicis Groupe (PAR:FR:PUB)  and plane maker Airbus (PAR:FR:AIR)  are among companies on that benchmark with the 50 biggest share buybacks since 2013.

Financials and cyclicals should lead drivers of dividend growth over the next two years in Europe, Goldman predicted. Dividend growth at banks is strong as they resume payments,given that as their earnings improve, they have fewer capital needs and low payout ratios. Bank dividends are expected to increase by 11% and 20% this year and in 2015, respectively. Dividends in the financials group slid 44% from 2007 to 2011. 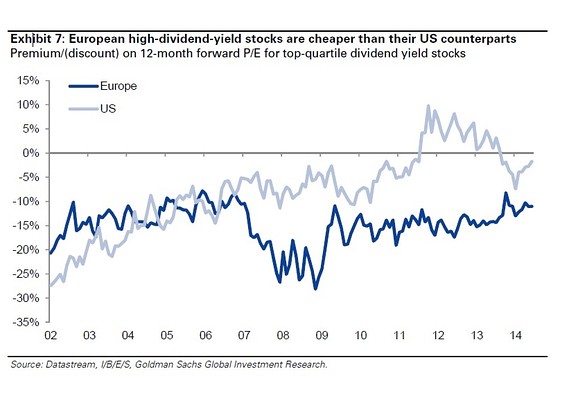 The basket has logged a weak performance since May, in part because of its “procyclical bias” —— overweight on the insurance sector and underweight “expensive, quality defensive sectors” such as such as food & beverage and health care. But it “should be more resilient if bond yields are rising, growth picks up and the search for yield eases,” the analysts noted.

Usually in Europe, paying a high dividend yield isn’t always seen as a good sign, they added. That’s because companies with the highest dividend yields have often been value traps whose dividends are at risk. (A value trap is a stock that’s been trading at low price-to-earnings ratios, book value or cash flow for a period of time, but whose price remains stuck.) That’s resulted in European high-dividend-yield stocks trading at a valuation discount, compared with those in the U.S., but that discount has narrowed in recent months.

Meanwhile, Societe General in a report Tuesday echoed the sentiment that “the quest for yield [will] continue in the coming months,” as the Federal Reserve sticks with a 0% benchmark rate this year, and action by the European Central Bank “continues to drive peripheral bond yields lower.”