If Roseanne Barr was fired for saying racist things, why do Americans still employ Donald Trump?

For ABC, the decision to dump Barr was based on American values of equality and tolerance. For Trump, there’s somehow a different standard 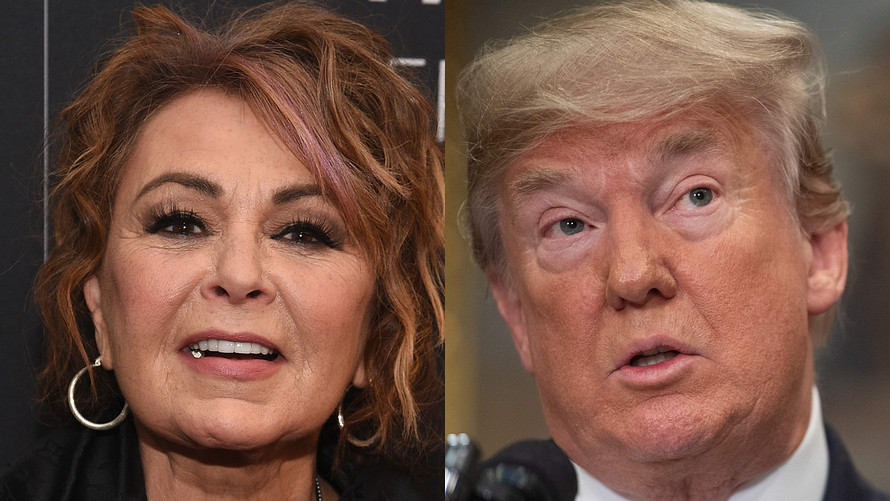 ABC did the right thing Tuesday when it canceled the “Roseanne” show after its star, Roseanne Barr, described former Obama administration official Valerie Jarrett as the product of a union between the “Muslim Brotherhood and Planet of the Apes.”

As someone noted when Carl Paladino, who co-chaired Donald Trump’s presidential campaign in New York, compared Michelle Obama to a gorilla, even the Ku Klux Klan is more subtle than that.

There’s nothing complicated about this kind of racism. Barr was comparing Jarrett, who is African-American, to an ape — and also suggesting Jarrett is a terrorist. It wasn’t the first time Barr had done something like that. In 2013, Barr compared Susan Rice, another African-American former Obama administration official, to an ape.

There has been some (vague) suggestion that ABC’s actions infringe on Barr’s right to freedom of speech. It’s worth noting why there is no free speech issue here — and what was really at stake when Barr tweeted out her racist slur.

As a legal concept, the First Amendment applies only to government action, although we may value free speech as a norm in other contexts . In other words, by definition, only the government is legally capable of violating someone’s right to free speech. Disney’s /zigman2/quotes/203410047/composite DIS +1.23%  ABC, as a private entity, cannot do so. In fact, in some cases, ABC (like other employers) could be legally required to punish racist speech in the workplace because of anti-discrimination laws .

There’s nothing wrong with that — from a legal standpoint or otherwise. ABC, as an employer, generally has the right to choose whom it employs (with some exceptions; for instance, it cannot refuse to hire people because of their race or sex). No one can, or should, be able to force ABC to employ a racist. Among other things, doing so could be bad for business.

That principle, of course, applies in other contexts. When comedian Kathy Griffin grotesquely and offensively displayed a replica of Donald Trump’s bloody, severed head for a photo shoot, she suffered a number of canceled shows. Private employers don’t owe Barr or Griffin a job, and are not required to put up with offensive speech by those they employ. (If Barr or Griffin were criminally prosecuted by the government, that would be a different story and would indeed implicate First Amendment protections.)

ABC took action not because it was legally required to do so, but because it understands how Barr’s racism was understood by the majority of Americans. We have made a decision as a society that racism is something worthy of condemnation — as reflected in amendments added to the Constitution after the Civil War and in ordinary laws passed by federal, state and local legislators.

Those principles are often applied, by choice, outside of a legal or governmental setting. Even though the law does not require action, deeply rooted social principles move most of us to recognize that racism, such as Barr’s, is simply out of bounds.

That is, of course, no coincidence. There was a time when white Americans could compare African-Americans and other people of color to animals with impunity. In fact, racism was the law of the land, both during the hundreds of years when human beings were held as slaves and in the hundred years after the Civil War when Jim Crow laws enforced an apartheid system in many parts of the United States (not only the South).

This isn’t about being holier than thou. As I have acknowledged , and I fully include myself, it’s essential not to shrink from the racism inside all of us. Most of us would never use Barr’s outrageous terms, but even more subtle racism is also dangerous.

For instance, while Donald Trump never compared Barack Obama to an animal, he did — as Barr did with Jarrett — suggest Obama might be a terrorist. And Trump, of course, launched his national political career on the wings of the “birther” lie that Obama, the nation’s first black president, was not a real American.

As president, Trump has suggested that Nigerians live in huts, while describing Haiti and countries in Africa as “shitholes.” He defended white supremacists who marched with torches and chanted anti-Semitic slogans as “some very fine people.”

After ABC canceled “Roseanne,” Matthew Miller quipped that: “You just can’t expect to say blatantly racist stuff and expect to keep your job unless you’re the president of the United States.”

In fact, there is a parallel to the ABC-Barr situation. The American people employ Donald Trump, and we can decide whether he is able to spew racist venom with impunity. As with Barr, the First Amendment does not protect Trump here. Like ABC, Americans can decide that we’re not comfortable having racism define our values.

Chris Edelson is an assistant professor of government in American University’s School of Public Affairs. His latest book, “Power Without Constraint: The Post 9/11 Presidency and National Security,” was published in May 2016 by the University of Wisconsin Press.