If the stock market is irrational, what do you call the bond market? 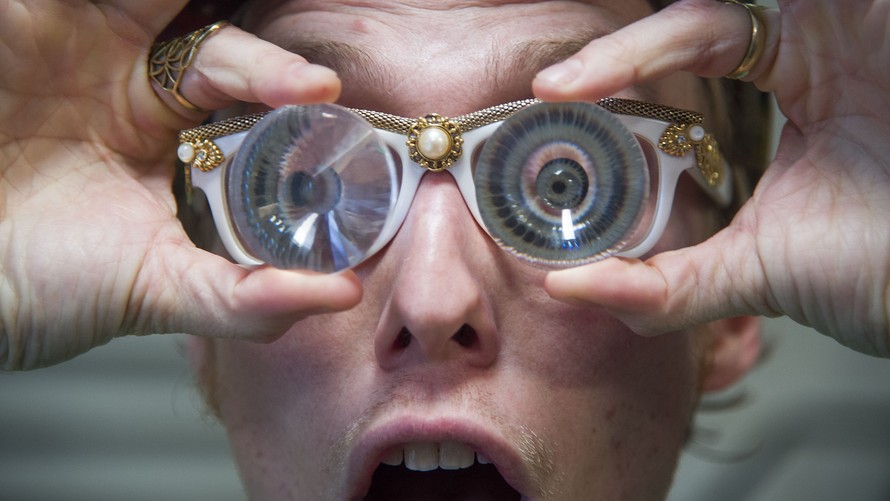 CHAPEL HILL, N.C. — If you thought stock-market investors were irrationally exuberant, you should take a look at the behavior of those in the bond market.

To illustrate how exuberant they are, consider which of the following bonds is riskier, and therefore must pay a higher yield to compensate investors for that risk: 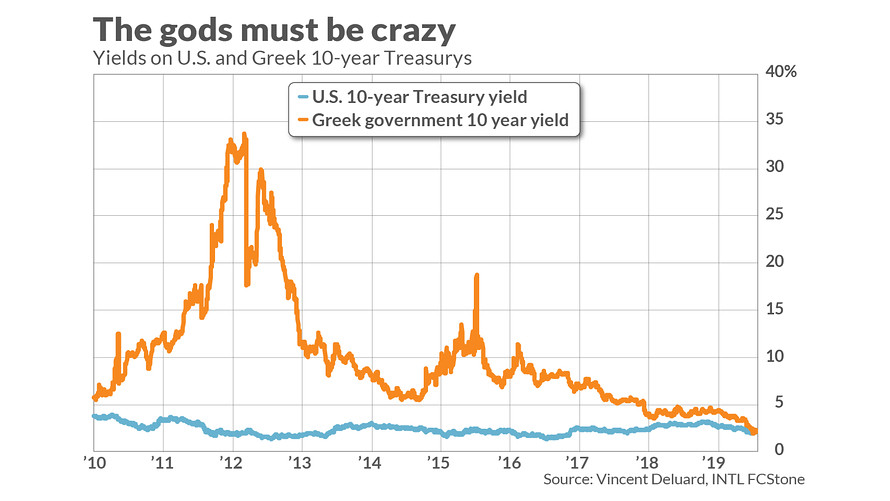 If you’re like every other sane and rational investor, you answered the latter. Yet the Greek 10-year yield recently dipped below that of the U.S. 10-year, as you can see from this chart. I challenge you to tell a plausible story in which this is rational.

Credit for pointing out this crazy situation goes to Vincent Deluard, head of global macro strategy at INTL FCStone , a financial services firm.

Before you even think of trying to devise a plausible explanation for why Greek government bonds should yield less than U.S. Treasurys, Deluard reminds you that “Greece is rated B+ by Fitch, has a debt-to-GDP ratio of 181%, a youth unemployment of 40.4%, and its nominal GDP has shrunk by 23% in the past decade. Greece has defaulted eight times and has been in default for half of its time as an independent country.”

It would be one thing if the situation with Greek government debt were an isolated anomaly. But it isn’t. Other “fixed income horrors” that Deluard enumerated in a recent report to clients include:

• Many emerging-market debt instruments currently have a negative yield. Examples include Polish government debt of up to seven years’ maturity and all of the Czech Republic’s euro-denominated debt.

• A number of junk bonds are trading with negative yields. Deluard mentions a number of bonds of up to five years’ maturity issued by Altice, the European conglomerate, many of which Standard & Poor’s rates “CCC+”—a rating indicating not just junk, but particularly speculative junk. And, yet, investors — via the negative yield — are in effect paying the company for the privilege of lending to them. That’s just crazy.

• An Austrian century bond, its 2.1% coupon bond maturing in 2117, recently traded with a yield to maturity of just 1.2%. If you think European inflation will average less than 1.2% over the next 100 years, there’s a bridge many want to sell to you.

• The spread between junk-bond yields and comparable government yields has narrowed. In fact, Deluard points, that spread in Europe is now lower than in the U.S., even though by virtually every measure the prospects for the European economy are worse than for the U.S. economy.

The current situation is the mirror opposite of the attitudes that prevailed in 1981, when the federal-funds rate rose to 20% and the 30-year Treasury bond yield rose above 15%. The idea that rates would ever come back down to earth was as unimaginable then as the notion today that rates will ever rise.

I know because I have spent countless hours going through the 1981 archive of the newsletters I monitored that year for my Hulbert Financial Digest. Hardly anyone was bullish on bonds. The only adviser I could find who was outright bullish on bonds was Dan Seiver, a member of the economics faculty at Cal Poly in San Luis Obispo, Calif., and editor of the PAD System Report advisory service. Seiver told me in an interview that his purchase of Treasury bonds at near their peak yield helped pay for his daughter’s Ivy League tuition.

Seiver’s newsletter is not one of the services that contracts with my Hulbert Ratings to audit its performance.

To be sure, it’s not as clear what the appropriate investment would be today that is the mirror opposite of buying bonds in 1981. Shorting bonds carries its own unique risks, after all. But a decision not to go aggressively short on bonds “is certainly not a reason to buy,” as Deluard reminds us.

Seiver finds it difficult to imagine how junk bonds will turn out to be good investments when purchased at low or even negative yields. If the economy goes into a recession, as the inverted yield curve is currently suggesting, many junk bonds won’t get repaid. But if inflation picks up, rates will certainly follow, and junk bonds will also suffer — as will the S&P 500 index /zigman2/quotes/210599714/realtime SPX -3.37%   and the Dow Jones Industrial Average /zigman2/quotes/210598065/realtime DJIA -4.06%  .

There’s very little room for error between the horns of this dilemma. Deluard warns: “Watch out for nasty surprises in the 2020s.”

Now read Howard Gold: We haven’t seen interest rates this low since before Hammurabi, so what bonds should you buy?