If you don't like stocks, shorting wheat is a nice alternative 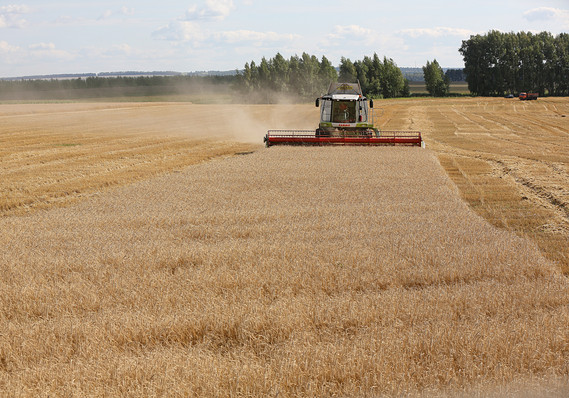 On first sight, a chart of CBOT wheat may look like a lackluster place to make money. Prices have been depressed, and a technician may be temped to "buy it on the cheap." But fundamentals suggest otherwise. In fact, the opportunity for traders at this time is likely still on the short side. For confirmation of this, we need look no further than supply side economics.

The bear in wheat

Wheat is a commodity whose fundamentals appear decidedly bearish. These fundamentals will likely be a burden on price for much of 2016, making wheat a prime candidate for call sellers. What are these fundamentals? The three with the biggest impact on price are as follows. 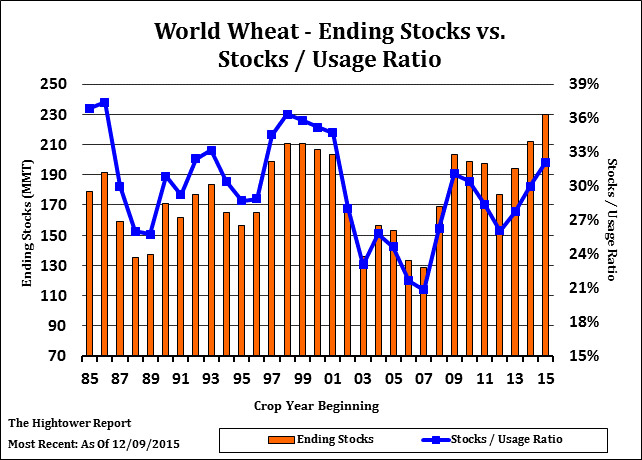 2. U.S. wheat stocks to usage at second-highest level on record: The runaway U.S. dollar has made U.S. wheat less competitive on the world market. A strong dollar makes U.S. wheat expensive to global importers. Why buy U.S. wheat when you can buy French or Russian wheat at a 10% discount? This has resulted in U.S. inventories accumulating. The U.S. wheat stocks vs expected domestic usage ratio has surged to 45.1% — the second highest on record. 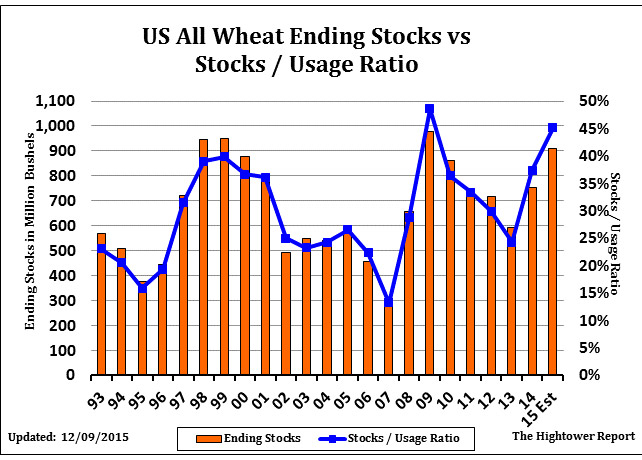 The 2016 season is expected to show the second-highest stocks-to-usage on record for U.S. wheat 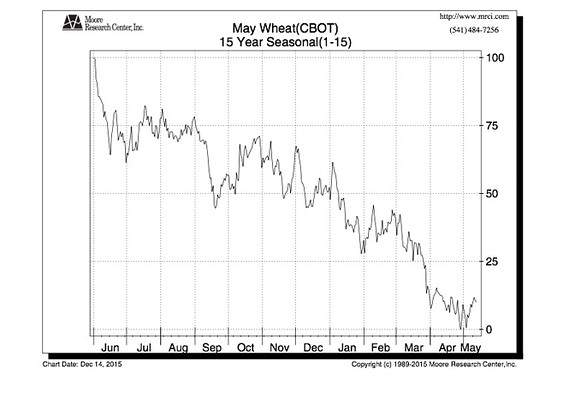 Unlike its cousins, corn and soybeans, wheat prices seldom benefit from the planting-season price anxiety often seen in the U.S. springtime. Why? Because almost three-quarters of the U.S. wheat crop is winter wheat, which is planted in the fall. Therefore, when traders and farmers are wringing their hands in March and April about weather conditions and how fast or slow their corn and soybean crops are getting planted, 75% of the wheat crop is already in the ground.

Thus, the market tends to take its price cues from the newly harvested supplies leaving the shores of such exporters as Australia and South America. Historically, this has kept pressure on wheat prices during the U.S. spring.

The combination of massive U.S. and global wheat supplies combined with a strong U.S. dollar (not helped by last month's Fed rate hike) has kept wheat prices under pressure in the second half of 2015. The problem for wheat is these fundamentals are unlikely to change anytime soon. It takes a while to work through that much of a supply backlog. Further confounding the wheat bulls is the upcoming seasonal tendency for weaker wheat prices in the spring. 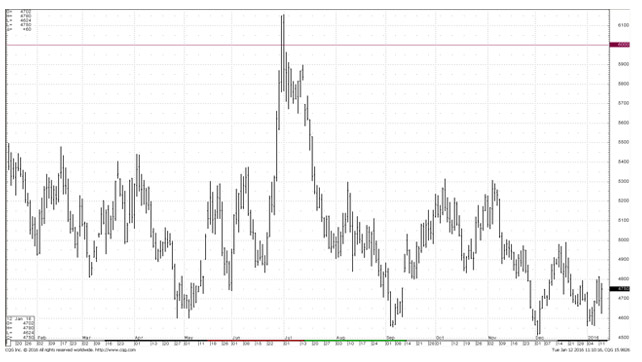 Does this mean that wheat prices can't rally? Of course not. Markets can rally for a variety of reasons — often in the face of contradictory fundamentals. What it does mean is that a substantial, sustained rally is unlikely. The burdensome supply outlook will likely mean heavy commercial selling coming in to stifle any technical rallies.

We advise call selling strategies for our clients. However, futures traders can view 20- to 30-cent rallies in this market as selling opportunities for at least the next 60-90 days. We feel wheat could have at least another 50-60 cents on the downside prior to planting completion in the spring.