Intel to buy McAfee for $7.7 billion

SAN FRANCISCO (MarketWatch) -- Intel Corp. said Thursday that it will pay about $7.7 billion in cash to buy McAfee Inc., a surprising deal that some analysts see as a bold move focused on the growing importance of security in computing, especially in mobile devices. 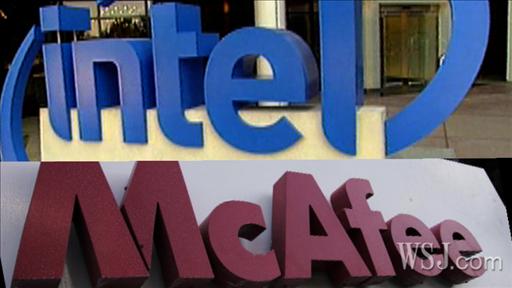 Intel said the deal "elevates focus on security on par with energy-efficient performance and connectivity," and particularly centers on bringing security to mobile wireless chips.

"With the rapid expansion of growth across a vast array of Internet-connected devices, more and more of the elements of our lives have moved online," said Paul Otellini, Intel president and chief executive, in a statement.

Otellini noted how "energy-efficient performance and connectivity have defined computing requirements. Looking forward, security will join those as a third pillar of what people demand from all computing experiences."

While unexpected, they said, the deal makes sense for Intel. The company is the dominant maker of chips in the PC market, but it is struggling to expand its presence in the market for chips for mobile-computing devices, such as smart phones.

"Strategically from Intel's standpoint, you'll have literally hundreds of millions, or even billions, of connected devices out there over the next 10 to 15 years and you'll need tightly integrated software security that are at the processor level," IDC analyst Crawford Del Prete said in an interview. "This is Intel's bid to be in front of that trend."

"Clearly, investors don't like it today -- particularly with the sizable premium attached to it," he wrote in an email. "But from a strategic standpoint, I think it makes a lot of sense. ...When it comes to viruses and spyware, security is becoming an increasingly important element for PC users."

Gleacher & Co.'s Doug Freedman also highlighted the importance of security, noting how Intel's bid for McAfee is "a consumer-security play that controls the desktop experience and assists in mobile-desktop virtualization."

"We will need security to make mobile a window into our desktop PCs," he added.

FBR Capital analyst Daniel Ives said the Intel-McAfee deal "significantly changes the landscape of the security-software landscape and speaks to the convergence of numerous technologies in the enterprise environment."

"While Intel buying McAfee is not the combination that investors were expecting to wake up to today, it is a monumental deal that speaks to the value in McAfee that has been underappreciated by investors for the last year," Ives wrote.

The deal will be slightly dilutive to Intel's earnings in the first year of operations and flat in the second year. On an adjusted basis, excluding a one-time write-down on deferred revenue once the deal closes and the amortization of acquired intangibles, Intel says the deal will slightly increase earnings in the first year and improve beyond that.