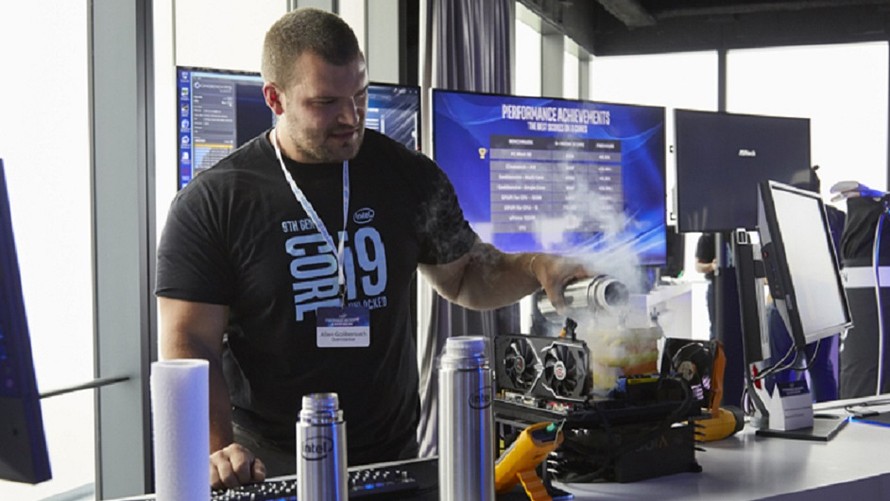 Intel Corp. shares slipped Friday following a big earnings beat and a surprise gain for the chip maker’s PC business as enthusiasm was tempered by analysts, many of whom argued that the company still has a lot of work ahead of it.

Intel reported adjusted earnings of $1.06 a share on revenue of $16.51 billion while analysts surveyed by FactSet had forecast earnings of 89 cents on revenue of $15.68 billion. A big surprise came from Intel’s largest segment, client-computing or traditional PC, with revenue rising 1% to $8.8 billion when analysts had expected a 6.8% decline to $8.13 billion from the year-ago period.

While refresh cycles for Microsoft Corp. /zigman2/quotes/207732364/composite MSFT +1.55%  Windows operating system were cited for a global boost in PC sales by research firms Gartner and IDC, analysts also pointed to buyers putting in early orders to avoid possible tariffs as a factor. As much was referenced by Bob Swan, Intel’s chief executive, on the Thursday conference call.

“Trade uncertainties created anxiety across our customers’ supply chain and drove a pull-in of client CPU orders into the second quarter,” Swan said.

Read: Even Intel doesn’t seem to know what’s going to happen with Intel

That shift in sales may have contributed to the mixed reviews of analysts, some of whom feel Intel still has a way to go when it comes to competing against Advanced Micro Devices Inc.’s /zigman2/quotes/208144392/composite AMD +1.53%  7-nanometer chips when its own 10-nm chip release has faced delays.

In chip parlance, nanometers, or nm, refers to the size of the transistors that go on a computer chip, with the general rule being that smaller transistors are faster and more efficient in using power.

“While we applaud Intel’s 2Q19 execution, we maintain a more tempered view relative to the initial positive share reaction...as we focus on an intensifying competitive landscape vs. AMD into 2H2019 to 2020,” wrote Wells Fargo’s Aaron Rakers, who has a market-perform rating on the stock.

Rakers calculates that the company appears to have “very slightly” pushed out the production ramp for its 10-nm Ice Lake Xeon server chip. The company said that it began sample shipments and is planning to start production wafers in the first half of 2020 before beginning a volume ramp in the second half. This struck Rakers as a slightly slower timeline when compared with Intel’s prior commentary.

Oppenheimer analyst Rick Schafer acknowledged that Intel’s planned sale of its smartphone-modem business to Apple Inc. /zigman2/quotes/202934861/composite AAPL +3.60%  eliminates a drag on earnings and cash flow, though Intel plans to apply any cost savings toward investments in its 7- and 10-nm processes.

Schafer maintained a perform rating following the report. “Structural growth and capital allocation have been effective themes within the semiconductor group,” he said. “We see better examples of both elsewhere.”

Evercore ISI analyst C.J. Muse said that share loss at the hands of AMD “will be nearly impossible to disprove” until “probably sometime in 2020.” He upped his target to $60 from $50 but reiterated his in-line rating on the stock.

“We do note that management only raised its CY19 outlook by $500 million, reflecting $400 million in pull-ins ($200 million to $300 million from personal computers) as well as some conservatism related to the current macro/geopolitical backdrop as well as worse than expected NAND pricing environment through 2HCY19 (~$100 million headwind),” he wrote. “We do wonder though if this sets up for another beat and raise in October.”

“While near term numbers do move modestly higher, that’s driven from one-time cost benefits and some demand pull forward which isn’t likely to be sustainable,” wrote Raymond James analyst Chris Caso, who has an underperform rating on Intel.

“While we do think cloud and service provider revenue is likely to accelerate over the next few quarters, Intel has already set the bar high for [its data-center group], and will have to contend with the demand that’s been pulled forward into 2Q, as well as the rising competitive challenges from AMD,” Caso said.

Bernstein analyst Stacy Rasgon, who has an underperform rating and $39 target, said “frankly, nothing has changed since the analyst day beyond some (likely temporary) PC upside.”