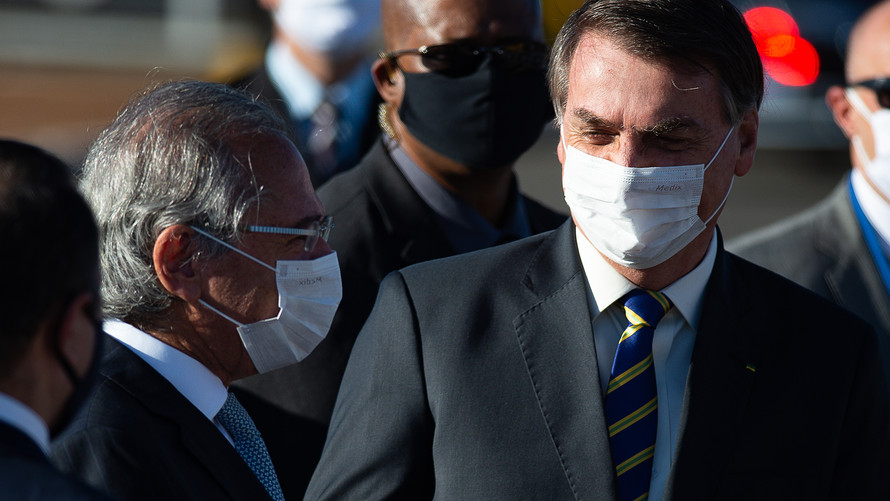 The focus for investors in Brazil is now on the staying power of the nation’s respected economy minister, after two health ministers resigned in a little over a month while its president could face an impeachment battle as the country struggles to contain the spread of COVID-19.

“We’re following a lot more closely the standing of Paolo Guedes and how strong or weak prospects of him remaining in his role are,” said Alejo Czerwonko, emerging-markets strategist at UBS, in an interview.

Brazilian stocks bounced sharply this week, with the benchmark BOVESPA stock index /zigman2/quotes/210597947/delayed BR:BVSP +1.97% up around 7% through Thursday but Brazilian assets have been punished more severely than emerging market peers.

Brazil’s bonds have also suffered, with the spread versus U.S. Treasurys widening by around 230 basis points, or 2.3 percentage points.

Brazil was among the hardest hit emerging markets when it comes to non-resident portfolio outflows in March. The chart below from the Institute of International Finance underlines the run for the exits.

The carnage in Brazil’s markets is overshadowed by the human tragedy.

The country has become one of the world’s major coronavirus pandemic hot spots. The outbreak has overwhelmed a health care system that was already strained. Brazil’s federal nursing council earlier this week said at least 116 nurses had died, the most in any country, according to The Wall Street Journal .

While some governors and mayors have ordered social-distancing measures, President Jair Bolsonaro has insisted the country’s economy should remain open. He’s attended anti-lockdown protests and in April fired his health minister, who had defended lockdown measures. The replacement minister quit this month, without offering a reason. Also last month, Bolsonaro’s popular justice minister, Sergio Moro, resigned, accusing the president of interfering in police investigations and prompting calls for Bolsonaro’s impeachment.

Part of Brazil’s underperformance versus other emerging markets has to do with the high expectations relative to other countries that many investors had for the country before the pandemic struck. The real’s collapse amplified a rush for the exits by non-resident investors.

Czerwonko said impeachment, while a headline risk, isn’t the “baseline scenario.” But Brazilian news reports of continued tensions between Bolsonaro and economy minister Guedes are concerning and deserve to be watched.

Guedes “is regarded by most investors as key to the credibility of Brazil’s economic policies,” he said.

Guedes, a University of Chicago-trained economist who studied under the late Milton Friedman , is the architect of a far-reaching plan to overhaul the country’s pension system, deregulate the economy and cut taxes.

Signs that Guedes was in conflict with other members of Bolsonaro’s cabinet who favored a more hands-on and less market-oriented approach to reforms have fueled unease, analysts said. Those concerns appeared to prompt a pledge this week by the country’s competition secretary declaring that Guedes was “very strong” in his position and had the “unequivocal support” of Bolsonaro, Reuters reported .

Faith in Guedes may have had a lot to do with high hopes for Brazil coming into 2020. The subsequent selloff has undoubtedly created some value opportunities in assets, but investors will need a lot of patience, Czerwonko said.

Brazilian assets look cheap by most valuation metrics across equities, bonds and the currency, he said, with some opportunities seen in the fixed-income arena but as the coronavirus outbreak continues and political uncertainty remains, investors may struggle to “find value-unlocking triggers.”

For equities, that means investors shouldn’t expect much upside in the short term, but those that are willing to tolerate volatility could see opportunities at current valuations. More immediate opportunities might be found in fixed income, he said, including sovereign debt. After all, Brazil doesn’t face the type of external debt strains that affect some other emerging markets.

External debt stands at around 10% of gross domestic product, Czerwonko noted, while foreign exchange reserves are just north of 20% of GDP.

Read: An emerging-market debt crisis could be next front in U.S.-China conflict

Get news alerts on Brazilian Real and S&P 500 Index — or create your own.