Days after some customers saw an unexpected $0 balance, Fidelity’s site was down again — and they’re not the only ones 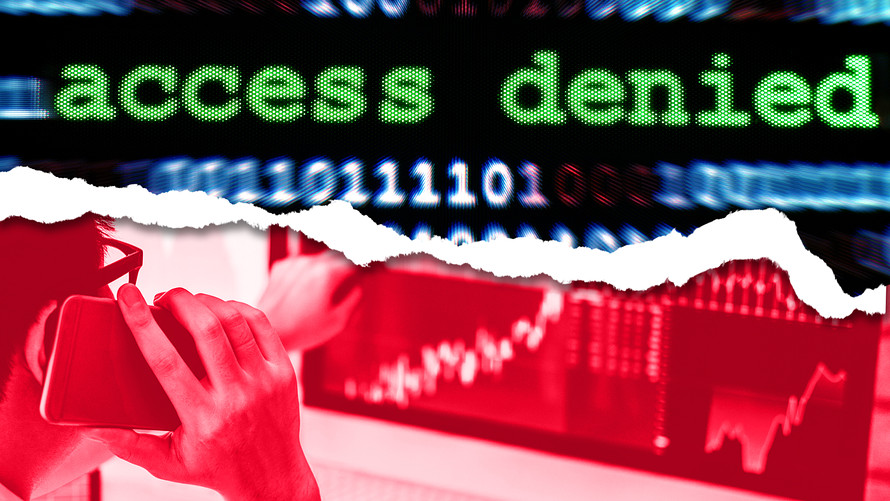 MarketWatch photo illustration/iStockphoto
Investors may not have been able to access their investment accounts Monday morning amid market volatility.

Investors are advised not to change their investment portfolios when the market is volatile — some were forced to take that advice when they couldn’t access their accounts Monday morning.

Some Fidelity Investment users tweeted Monday morning that at the start of the trading day, they couldn’t log in to their accounts, or when they did, they saw a $0 balance. This comes less than a week after Fidelity customers were unable to access their accounts, or came across with no balance for their 401(k) and other investment portfolios.

“Looks like Fidelity is trying to protect investors from themselves? Or I just lost all my monies already today,” one Twitter used posted, with a screenshot of an account with $0 balances.

The issue was resolved as of 10:30 a.m. on Monday, Fidelity told MarketWatch.

The Boston-based investment company wasn’t the only one experiencing technical difficulties amid Monday’s market volatility. Some customers at TD Ameritrade (NAS:AMTD)  and Charles Schwab (NYS:SCHW)  also tweeted they could not access their accounts, or that the site was slow to enter. “Due to higher-than-usual volumes, some clients may have experienced delays in accessing some online features as the market opened, but our systems are fine and up and running,” a Schwab representative said. TD said client trades were and are being processed as usual and that the company “did briefly experience some slowness in the reporting of trade confirmations this morning related to heavy trade volumes at the open.” Schwab and TD were responding to customer tweets Monday morning saying the issue had been resolved, and to contact the company if they still could not access their accounts.

Twitter users were complaining that lag or inaccessibility would affect their trading strategies for their investment accounts, especially amid major drops in the market, as was seen on Monday. The Dow Jones Industrial Average (DOW:DJIA) fell 830 points, or 2.9%, on Monday morning, and was down 997 points at its session low. The S&P 500 (S&P:SPX) fell 90 points, or 2.7%, and the Nasdaq Composite (AMERICAN:COMP)  was down 314 points, or 3.3% during the same time frame. News about the spread of the coronavirus COVID-19 may have driven these drops, experts said.

But financial advisers typically tell their clients not to worry about drops in the indexes, and not to act on market volatility. The users facing issues with account access were concerned they could not trade in their brokerage accounts, such as buying or selling individual investments, but retirement accounts should very rarely be touched during drops in the market, experts say. Retirement savers may wonder if they should change their allocation to be more conservative, or pull out of their investments altogether. Although the answer depends on personal preferences, professionals often advise to continue with business as usual.

Some financial advisers will even suggest they not look at their accounts at all, especially if they’re not retiring for another few decades. People closer to retirement — within five or 10 years — may want to talk a professional about finding the right asset allocation so that they feel comfortable with the risk in their portfolio but can still see gains from their investments at the start and duration of their retirement.