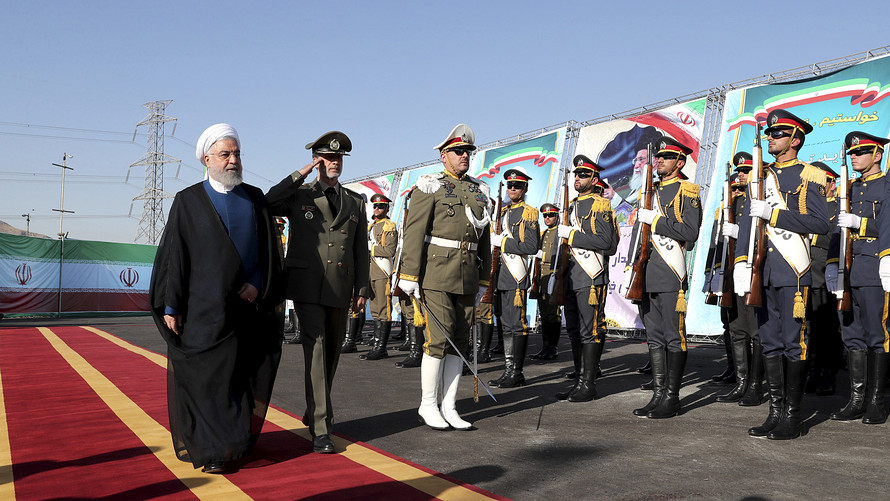 Associated Press
In this photo released by the official website of the office of the Iranian Presidency, President Hassan Rouhani, left, reviews an honor guard as he is accompanied by his Defense Minister Gen. Amir Hatami during a ceremony to unveil Iran-made Bavar-373 air-defense missile system, Iran, Thursday, Aug. 22, 2019.

President Hassan Rouhani made the comment in a speech in Tehran during the unveiling of the Bavar-373, a long-range surface-to-air missile system that he described as an improvement to the Russian S-300.

“Now that our enemies do not accept logic, we cannot respond with logic,” Rouhani said in the televised speech.

He added: “When the enemy launches a missile against us, we cannot give a speech and say: ‘Mr. Rocket, please do not hit our country and our innocent people. Rocket-launching sir, if you can please hit a button and self-destroy the missile in the air.’”

On Wednesday, Iran’s state TV reported that the Bavar-373 is able to recognize up to 100 targets at a same time and confront them with six different weapons.

Since 1992, Iran has developed a homegrown defense industry that has produced light and heavy weapons ranging from mortars and torpedoes to tanks and submarines.

The U.S. re-imposed sanctions on Iran after the Trump administration pulled out of the nuclear deal over concerns about Iran’s missile program and regional influence.

President Donald Trump argued that the accord did not limited Iran’s ballistic missile program.

Iran has developed a homegrown defense industry since 1992.