Is now the right time to rebalance your retirement investments?

Rebalancing is the opposite of momentum investing

Rebalancing is something almost all of us do in our retirement accounts, and most use January as the time to do it.

But is rebalancing always the right thing to do? And is it something you should do annually, or more or less often? The answers turn out to be far more complex than you ever thought.

Rebalancing, of course, brings each asset’s portfolio weight back into line with its assigned weight—and presumably is undertaken to reduce risk. Consider a standard stock/bond portfolio that a year ago was 60% invested in Vanguard’s Total Stock Market Index fund /zigman2/quotes/202876707/realtime VTSMX +0.34%   and 40% in Vanguard’s Total Bond Market Index Fund /zigman2/quotes/206402661/realtime VBMFX -0.10% . Assuming no changes since then, it currently is nearly 65% invested in stocks and 35% in bonds. Rebalancing would sell enough of the stock index fund and buy enough of the bond fund to bring those allocations back to 60:40.

In fact, however, rebalancing also increases risk. That is the surprising finding of recent research co-conducted by Duke University’s Campbell Harvey . He and his co-authors point out that, because rebalancing continually adds more money to the asset losing the most money, rebalancing will magnify losses during major bear markets. By the same token, by continually selling off portions of those assets gaining the most, rebalancing during long-uptrending bull markets will mute the gains otherwise achieved.

Does rebalancing ever lead to superior returns? Yes—when there is reversion to the mean at whatever frequency you rebalance. If you rebalance quarterly, for example, you in effect are betting that the assets that perform the best in a given quarter perform less well in the subsequent quarter—and vice versa.

Put another way, rebalancing is the opposite of momentum investing, whose mantra is letting your profits run and cutting your losses. Rebalancing improves returns during periods when momentum doesn’t work, and not otherwise.

Though you might think there is little overlap between a rebalancing and a momentum strategy, Professor Harvey argues that it is possible to combine them. The key is to differentiate between periods in which momentum is working from periods in which it isn’t. You don’t have to have perfect accuracy when differentiating in order for it to make it worthwhile.

Professor Harvey’s recommendation is that we not rebalance at preset intervals, such as every quarter or year, but instead use signals from short-term momentum crossover models to determine when to do so. Such models are based on two different moving averages of different lengths; signals are generated when the shorter-term moving average crosses over the longer-term one. And such crossovers indicate a shift from when momentum is working to when it is not, and vice versa.

By rebalancing only when a crossover takes place, we avoid rebalancing during longer-term trends in which doing so would otherwise increase losses or mute the gains. The accompanying chart illustrates this crossover strategy in the case of the S&P 500’s /zigman2/quotes/210599714/realtime SPX +0.25%   50-day and 200-day moving averages. These are the two moving averages that are often used by those who use crossover models. 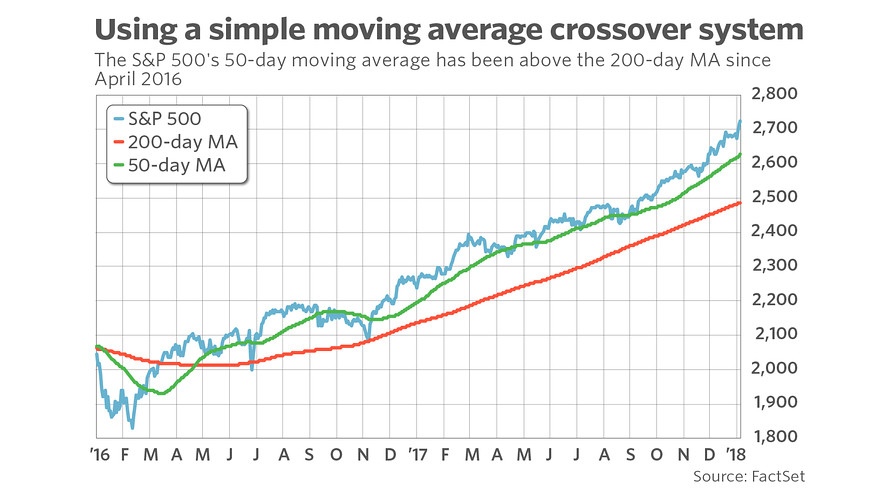 For the moment, with the stock market hitting new all-time highs almost daily, another rebalancing event does not appear imminent. So if you otherwise were about to undertake your annual rebalancing, you might want to instead sit on your hands and wait until the 50-day moving average crosses below the 200-day.