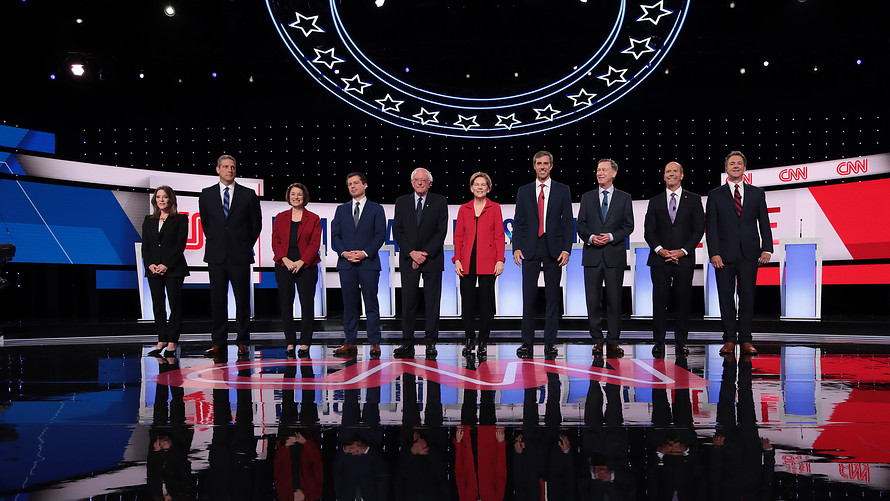 Getty Images
Democratic presidential candidates at the Fox Theatre on July 30, 2019 in Detroit.

The Democratic National Committee is increasing the polling and fundraising requirements for presidential candidates to qualify for the primary campaign’s fifth debate in November.

But in a nod to the potential for late-surging campaigns, the increases are not as steep as those from the first and second debates during the summer to the third and fourth debates after Labor Day.

The party’s Monday announcement comes as candidates make their final fundraising pushes to qualify for the Oct. 15-16 debates in Ohio.

The requirements from debate to debate have been heavily scrutinized by candidates and party activists alike, as DNC Chairman Tom Perez juggles potentially conflicting priorities: keeping a historically large field from being too unwieldy for voters while keeping his promise that everyone running would have a fair shot to make a case on the national stage.

Candidates also must hit 3% in at least four national or early state polls — or hit 5% in two early state polls. That separate early state threshold is a new polling pathway that DNC officials say is meant to reward candidates who may be generating enthusiasm in states like Iowa or New Hampshire even if similar support isn’t registering in national polls.

The DNC has not yet announced the date or location of the November debate.

The changes are immaterial to the top tier of candidates: Joe Biden, Elizabeth Warren and Bernie Sanders. A few candidates trailing behind them — Kamala Harris, Pete Buttigieg, Beto O’Rourke — also have met or are within striking distance of those November marks.

But the new rules represent another step up that puts pressure on candidates teetering in the second tier and below, even as the DNC conceivably opens a new path with the early state polling that could benefit underdogs like Minnesota Sen. Amy Klobuchar and Montana Gov. Steve Bullock, both of whom are focusing heavily on the first caucus state of Iowa.

So that could mean a further culling from the September debate that featured 10 candidates. Eleven or 12 candidates could qualify for October’s debate.

That’s already down from the 20 candidates who qualified in June and July when the qualifications were at their lowest. Candidates could make those stages by hitting just 1% in polls or gathering 65,000 donors — and they didn’t have to do both.

Perez doubled the marks for the next two debates and required that candidates hit both.

The chairman has defended the moves throughout the campaign, saying that campaigns had plenty of notice and that candidates who couldn’t meet the qualifications weren’t building the support necessary to defeat President Donald Trump next year anyway. But some longshot candidates have blistered Perez, especially governors who began the campaign without federal campaign accounts or national donor lists, making it harder to hit the grassroots donor marks.

Even some of the senators — who were able to transfer money from their federal Senate campaign accounts to sustain their initial months of campaigning — said the donor requirements forced them to spend heavily for online fundraising consultants rather than traveling to early states to meet voters in person. That conundrum already helped drive Sen. Kirsten Gillibrand from the race, and Sen. Cory Booker’s campaign manager recently published a memo saying he’d have to raise almost $2 million in a matter of weeks to remain viable.

Bullock, meanwhile, is the only governor or former governor remaining in the 2020 Democratic campaign, and he’s qualified only for the July debate so far. He and Klobuchar are betting heavily on their moderate appeal connecting with Iowa caucusgoers.

DNC officials did not name any current candidates but gave a nod to the Iowa-specific strategy in explaining the new 5% avenue to the November stage. They pointed to previous candidates like Jimmy Carter in 1976 and Rick Santorum in 2012. Both were afterthoughts in national polling in the early fall ahead of winter voting. But they’d started to show significant movement in Iowa.

Carter won more votes in Iowa than any of his competitors, finishing second only to those voting “uncommitted.” He went on to win the nomination and the presidency. Santorum edged national favorite Mitt Romney in the GOP Iowa caucus in 2012, and he went on to be the last challenger standing before Romney secured the nomination.