It may soon be time to go for the gold

Something tells me we might be experiencing the give-up phase for gold. By that I mean a point in the gold price cycle when just about everyone gives up on the possibility that gold prices will ever rise again. Which could mean the time to buy is here.

For instance, in mid-December, the Wall St. Journal featured a front-page article on the yellow metal in which one money manager opined that "The reasons to own gold have just evaporated." Another, known for his perennially bullish outlook for commodities, has apparently hedged his gold position but told the Journal "I wouldn't buy gold right now under any circumstances." Another strategist at a major French Bank recently commented in a report that "The yellow metal has lost its once-crucial role as a safe haven."

Also, consider that a recent Merrill Lynch survey of asset managers reported that commodity allocations are currently close to a 12-year low and the fact that a couple of major banks recently closed or severely cut their commodity trading departments, and you can see what I mean about the "give-up phase". Where were these stories when gold was trading close to $1,900?

Add to this background the fact that investors who are usually correct at turning points are positioned for a rally, and the picture becomes clearer. Those smart investors can be found in a recent Commitments of Traders report, where the futures holdings of commercials registered close to a 12-year high.

On the other hand, small speculators, who are typically incorrect at turning points, are holding net long positions that are just above a 12-year low. I don't think there is much doubt that sentiment is consistent with a major low, but the big question is whether price has actually hit bottom.

Technically it remains in a primary bear market. Trend direction in my book is principally determined by two factors. First, the price is related to its 12-month moving average (MA). This is certainly not a perfect indicator, as you can see from Chart 1, but it has worked reasonably consistently in the past. 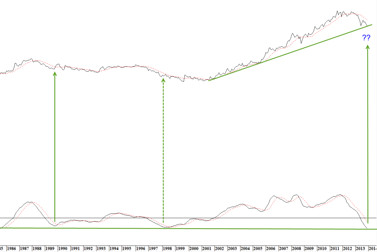 The Dec. 31 close for spot gold was $1189, and its 12-month MA lies around $1395. It is dropping at a rate of about $40 per month. Second, I use a smoothed long-term momentum indicator, as featured in the lower panel of Chart 1. It signals a bull market when it reverses its downward trajectory and crosses above its (dashed) 9-month MA. As you can see, it's still declining, so no reversal there.

That said, I have noticed that in the past when this indicator has fallen to the -200 level, it has often signified the end of a bear market, or at worst, an extended trading range. Accurate signals of this nature have been flagged by the solid arrows and the failed signal by a dashed one. Momentum, just like our give-up psychology, is in the ballpark for a reversal, and the price is just above support in the form of the form of a 12-year up trendline, but what would it take to actually signal a reversal in trend? 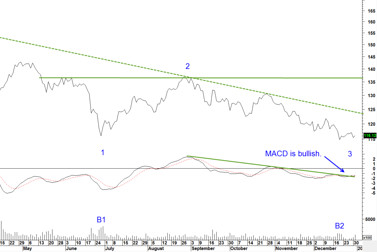 Chart 2 shows that the SPDR Gold Trust ETF (PSE:GLD)  may be in the process of forming what is known in technical jargon as a double bottom. These formations develop when a price finds a low (1), experiences a rally (2) and a subsequent decline that halts close to, or slightly below, the previous low (3). The pattern is completed when the price rallies back above the rally high separating the two lows (at 2). That high just happens to be at $137, just slightly above where the 12-month MA will be at the end of January. A characteristic of secondary bottoms is that they are associated with a loss of interest relative to the first. That shows up in the form of lower volume at B2 than B1.

Recent prices for the GLD around $116 are clearly some way from the magic $137, but there is another good chart point between them, and that's at the dashed line, which is just under $124. Down trendlines get their significance from their length, the number of times they have turned back rallies and their angle of descent (the shallower the better).

From a primary-trend-reversal point of view, this one scores on all three fronts. I think there is a pretty good chance it will be tested early in the new-year because the short-term momentum series in the middle panel has just started to edge higher and has violated a four-month down trendline.

Obviously only time will tell, but if the line is penetrated and the price is able to hold the break, I think it will be time to go for the gold.