‘Things may have to get much worse before they get better,’ strategist warns 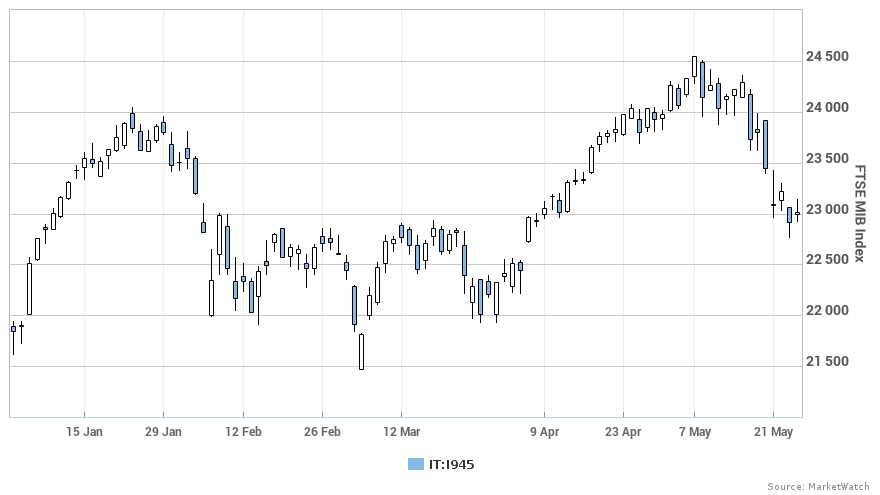 Italy’s main stock benchmark has slumped in May.

Before Italy’s general election in March, strategists said the worst-case scenario for equity markets would be an anti-establishment coalition government.

That feared result is exactly what the country’s political system has delivered.

Giuseppe Conte is on track to become the new prime minister, with a pair of populist parties — the 5 Star Movement and the League — picking the little-known law professor as a compromise candidate to head their coalition. Conte isn’t getting a honeymoon period, with one critic this week already deriding him as a “ a perfect Mr. Nobody, a perfect useful idiot .”

The new government represents “the worst-case scenario,” with its plans worrying investors, but there are some reassuring factors, said Seema Shah, an investment strategist at Principal Global Investors.

More radical propositions such as an opt-out mechanism from the euro and debt relief have been dropped, she noted in a blog post Thursday . On the downside for bulls, the 5 Star Movement and League’s stimulus plans would cost around 7% of the country’s gross domestic product, and they also have proposed the creation of mini-government notes that many investors believe could provide a veiled way to finance spending, Shah added.

“Not only would these lavish plans lead to a significant increase in the government deficit and threaten the sustainability of Italy’s public debt mountain, but they would set Italy on a confrontation path with European institutions,” Shah said. Worries about such issues have pushed the spread between 10-year Italian bond /zigman2/quotes/211347230/realtime BX:TMBMKIT-10Y +8.61% and German bund yields /zigman2/quotes/211347112/realtime BX:TMBMKDE-10Y -7.16% to some 65 basis points, while Italy’s FTSE MIB stock /zigman2/quotes/210598024/delayed IT:I945 -2.66% has tumbled by almost 7%, she noted.

“Yet compared to 2011 when German and Italian spreads exceeded 500 basis points, the moves have been muted. Perhaps this is because markets are skeptical about the longevity of this alliance given the wide ideological disparities between the two parties,” Shah said, adding that the Italian constitution is “infamous for its ability to frustrate and delay major policy changes.”

Investors also may be optimistic thanks to Italy’s /zigman2/quotes/207981587/composite EWI -0.97% improved economy and fiscal position. UBS strategists sound like they’re in that camp, writing in a note Wednesday that their “working assumption has been that risk premium would not escalate dramatically enough to derail the positive impact from stronger growth.” They are sticking with their bullish view on Italy at the moment: “We are watching the situation closely, but are not changing our strategic exposures here.”

“The main reassurance to the market has been the presence of the ECB as a backstop. Under its asset purchase program, it could potentially intervene in the market to minimize market stress,” she said. But she also offered this warning: “We just don’t know at what level they would intervene. Unfortunately, things may have to get much worse before they get better.”