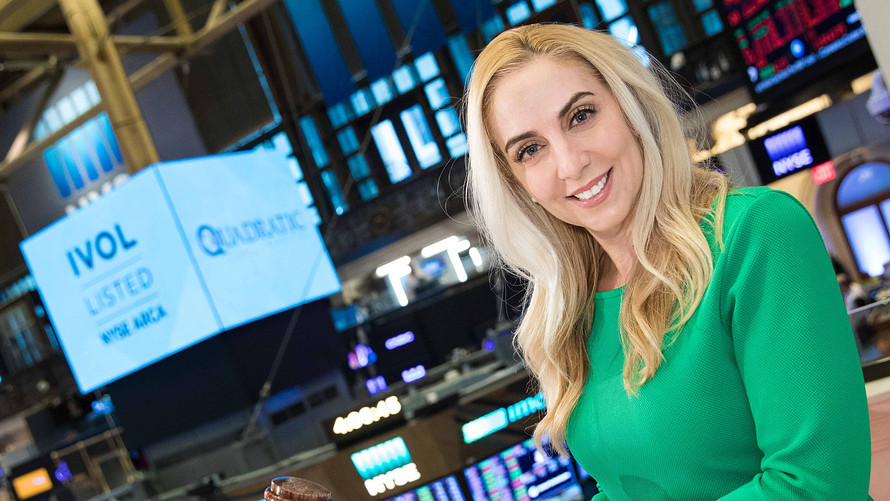 NYSE
The New York Stock Exchange welcomes Quadratic Capital in celebration of Nancy Davis’s being named one of Barron's 100 Most Influential Women in Finance.

Nancy Davis, the chief investment officer and founder of advisory firm Quadratic Capital, rolled out a new exchange-traded fund just a year ago, and it has quietly become one of the hottest performers in the epoch of coronavirus that brought much of the financial world to its knees.

It’s a notable accomplishment given that the fund, an actively managed ETF that launched on May 14 last year, is far from plain vanilla in a universe of fund products that tend to focus on buzzy themes or trendy strategies.

The Quadratic Interest Rate Volatility & Inflation Hedge ETF /zigman2/quotes/212340916/composite IVOL +0.41% is not that.

It is, however, intended to move in and out of Treasury inflation-protected securities, or TIPS, and over-the-counter fixed-income options in a bid to beat the market.

And beaten the market it has — and handily.

Earlier this month, Bloomberg Intelligence said returns for IVOL, referring to its ticker symbol, put the fund in the top 5% of ETFs in 2020, with its assets under management up to around $115 million, compared with $5 million when the fund first kicked off.

“Strong performance from a new ETF can help it to quickly hit the radar for investors,” Todd Rosenbluth, senior director of ETF and mutual fund research at CFRA, told MarketWatch.

“The fund has a unique approach and is more expensive than other bond funds but the premium fee has been justified this year,” he said.

Davis has viewed IVOL as a hedge against corrections in equity and real estate as the prices of stocks and properties tend to fall during times of increased fixed-income volatility.

She also notes that there aren’t products in place that accurately track volatility in fixed income, despite the fact that one of the more popular and closely followed products in markets is the Cboe Volatility Index /zigman2/quotes/210598281/delayed VIX +6.65% , a gauge that tracks implied volatility in the S&P 500 stock index using options.

“I think it is a great time to own to own products that hedge against fixed-income volatility because there’s never been more unknown, unknowns,” she told MarketWatch.

The COVID-19 pandemic has devastated the jobs market and the broader economy, with an April reading of labor conditions in the U.S. showing that a record 20.5 million people are out of work, bringing the unemployment rate to 14.7%, its worst level since the Great Depression by some measures, as businesses closed in order to comply with state and federal measures to slow the spread of the deadly pathogen.

The disease that was first identified in Wuhan, China, in December has claimed more than 270,000 lives globally and infected nearly 4 million people (1.3 million in the U.S. alone), according to data aggregated by Johns Hopkins University as of Friday afternoon.

The Federal Reserve’s balance sheet has ballooned to a record $6.72 trillioi in an effort to provide stimulus to markets that were shocked by the speed and severity of the business downturn. Meanwhile, the U.S. government has doled out trillions of dollars to limit the coming recession and help small businesses and Americans who now find themselves out of work.

History suggest that all that money-printing may lead to a boom in inflation, the increased costs of goods and services over time.

Upon learning that prominent investor Paul Tudor Jones was turning to bitcoin /zigman2/quotes/31322028/realtime BTCUSD -0.93%   as an inflation hedge, Davis quipped that “maybe he should consider IVOL.”

More seriously she said, “even if you’re not buying IVOL, inflation protection in general just to hedge your purchasing power,” is a good idea.

Back in October 2017, Davis garnered attention when she predicted that a preternatural period of placidity in the stock market was about to come to an ugly end. A year later it did, in spectacular fashion in the fourth quarter of 2018.

To be sure, scenarios in which IVOL would suffer including an inverted yield curve — the spread between longer-dated and shorter-dated bonds — falling inflation, and muted volatility in interest rates.