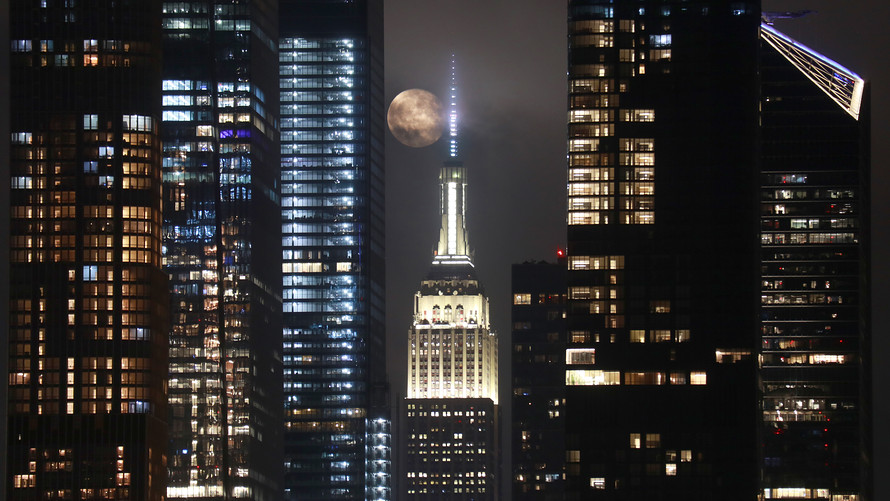 Getty Images
The moon rises behind the Empire State Building and Hudson Yards on Aug. 16, as seen from Weehawken, N.J.

Anastasia Titarchuk says a summer bout of stock-market volatility is likely here to stay unless there’s a resolution soon of the trade tussle between the U.S. and China.

The CIO was officially tapped as head of the U.S.’s third-largest pension fund, which boasts assets of more than $210 billion, earlier this month, and she believes that the market faces a number of challenges, not least of all the tariff clashes.

Titarchuk, however, suggests that Sino-American tensions may not just be a passing phase of geopolitical gyrations. “We don’t expect a quick resolution of the tariff question,” she said.

“That part of volatility will stay with us for some time…at least through the end of the calendar year,” she said.

The forecast that tariff talks may be lengthy is based on the investment manager’s view that the animosities between Washington and Beijing are representative of the type of exchange you would see between a rising superpower and a mature one in the U.S., with neither eager to give ground.

Titarchuk has earned plaudits since joining the Common fund back in 2011. She was named a rising star by Institutional Investor in 2015 on the back of returns of about 9.8% in the 2013-14 fiscal year. The Common fund is ranked the U.S.’s third largest behind California State Teachers’ Retirement System, or Calstrs and California Public Employees’ Retirement System, or Calpers.

Choppy and uncertain markets have given officials at the Common fund sufficient reason to re-examine the current annual return target for the fund of about 7% as “a matter of prudence.”

Titarchuk knows a thing or two about volatility. She joined Lehman Brothers as a member of a small sales team centered on volatility as an asset class just before the investment bank went belly-up in 2008 under the weight of hard-to-value securities at the heart of the financial crisis.

The Moscow-born, Yale University educated investment pro says that the current environment isn’t terrible but isn’t ideal for investors hoping to match their assets with their liabilities. “Yield is very hard to find,” she said. Some $15 trillion in government bonds now carry rates below 0% and central banks across the globe have adopted policies that imply that lower rates are in the offing.

She says that the Common fund is still an investor in fixed-income bonds but noted that “it’s not generating nearly the same yield” that it normally does. The pension is allocated roughly 50% in stocks about 25% in fixed income and 25% in investments considered alternatives.

“We do like yield-y investments, [including] core real estate, and some infrastructure and we do see some see some opportunities to generate yield in other investments,” she said.

Titarchuk said so-called sustainable investing, defined by some as a tactic that considers environmental, social and corporate governance, or ESG, criteria to generate long-term returns and a social impact, is one of NY Common’s biggest endeavors currently.

”Sustainable [investing] is one of our largest initiatives,” she told MarketWatch.

New York state Comptroller Thomas P. DiNapoli recently referred to climate change as “one of the most significant risks facing investors and the warnings are growing increasingly dire.”

Titarchuk said the fund aims to get eventually to $20 billion in sustainable assets from around $10 billion over the next decade, echoing comments DiNapoli has made.

Read: Treasury is about to flood the market with debt to fund U.S.’s $1 trillion deficit — and that is a concern