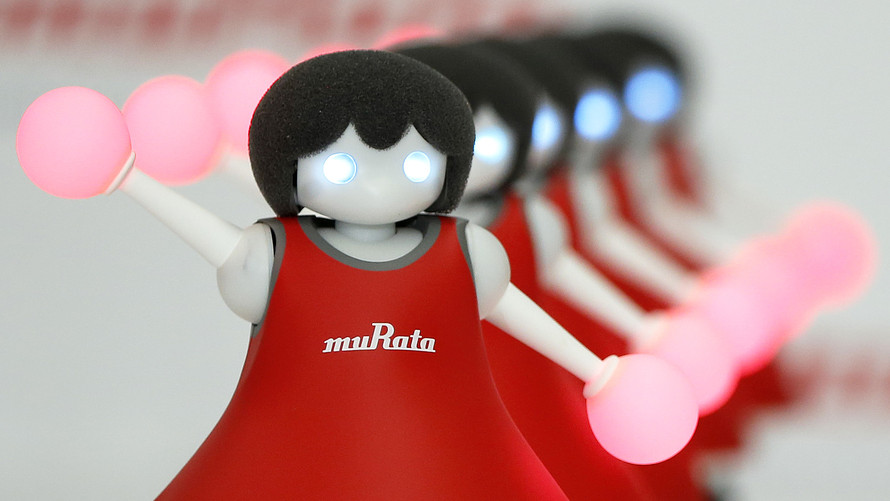 Bloomberg News
Murata Manufacturing Co.'s robot cheerleaders had little to cheer about after the stock’s slide Monday after an earnings warning.

Japanese stocks fell sharply early Monday, leading declines in the rest of Asia, on the yen’s surge to a new 1½-year high against the dollar, weak earnings results from several firms and selling after the Bank of Japan’s inaction on Thursday.

Japanese stocks are extending falls following the BOJ’s decision to keep its policies unchanged despite slowing inflation and previous expectations for a boost for its asset-purchase program, particularly in exchange-traded funds.

The yen’s surge against the dollar is also hitting Japanese exporters. The dollar was at ¥106.48 after falling to as low as ¥106.14, the lowest level since October 2014, according to EBS.

“Bad news takes place all at once,” said Katsunori Kitakura, strategist at Sumitomo Mitsui Trust Bank. He said market turbulence around the BOJ policy meetings suggests the central bank’s communication with markets isn’t as smooth as it should be.

Over the weekend, the U.S. Treasury Department, in its semiannual currency report to Congress, called out China, Japan, South Korea, Taiwan and Germany for relying on policies it says threaten to damage the U.S. and the global economy. The move, meant to pave the way for a new pan-Pacific trade deal, may discourage Japanese authorities to directly intervene in the currency market, analysts say.

He said, though, the market sentiment may improve in coming weeks if the government takes fiscal stimulus measures in time for the Group of Seven summit meetings later this month.

Electronics parts maker Murata Manufacturing Co. /zigman2/quotes/204266745/delayed JP:6981 -0.95%   is down 14% following its projections for a decline in earnings in the fiscal year that started in April. The company cited a higher yen, lower product selling prices, increased fixed costs and higher research and development expenses. Sony Corp. /zigman2/quotes/201361720/delayed JP:6758 -0.70%   is down 4.3% after the company posted a net loss in the January-March period, weighed down by its device and mobile communication businesses.