Jobless claims tell us 33 million people are unemployed, but many doubt it’s that bad 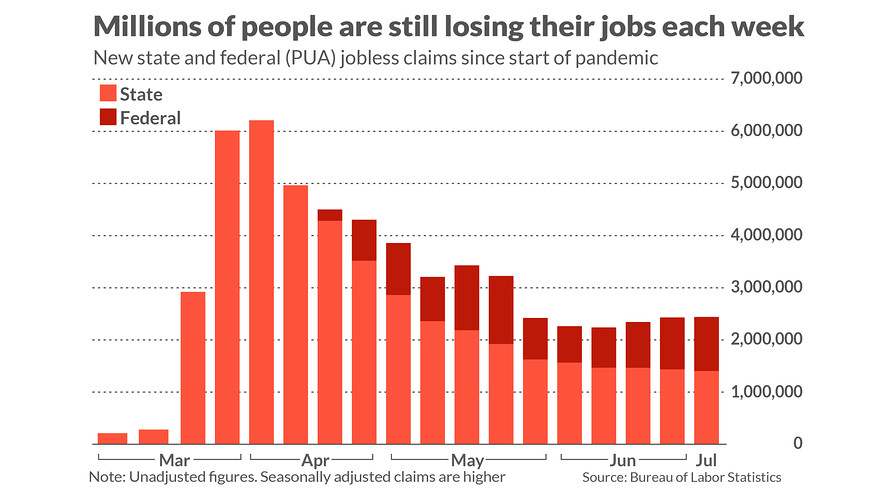 What the heck is really going on in the labor market? Are 33 million Americans unemployed? Or is it 18 million? Are companies bringing back millions of workers? Or laying even more people off?

It’s hard to get a clear answer from the government’s two main tools to assess the labor market. Weekly jobless claims and the monthly employment report appear to tell very different stories.

Consider jobless claims. Although they have fallen from a peak of nearly 7 million in late March, more than 1 million new applications for unemployment benefits are being filed each week. And that doesn’t even include workers who filed through a temporary federal relief program.

Some 1.31 million new claims were filed through the states in the week of June 28 to July 4, the government said Thursday.

Perhaps worse, the number of people receiving benefits through all state and federal programs has hovered near 30 million from the first week of May to late June. These are known as continuing jobless claims. The rose again in the week ended June 20 to 32.9 million.

“I am surprised and disappointed the continuing claims have not come down further,” said chief economist Stephen Stanley of Amherst Pierpont Securities. “It doesn’t ring true with everything we are seeing.”

It shows that the economy regained 7.5 million jobs in May and June, partially recovering some of the more-than 22 million jobs lost during the first two months of the pandemic. A variety of other economic indicators also suggest that more people have gone back to work.

Most but not all economists see the monthly employment report as a more accurate gauge of the labor market. After all, jobless claims only reveal one side of the coin: How many people may have lost their jobs. It doesn’t tell us how many people returned to work.

The monthly employment report, however, presents a net figure, or both sides of the coin: Job gains minus job losses.

“The monthly employment report is a better indicator of the jobs market. It shows real improvement,” said chief economist Gus Faucher of PNC Financial Services. “The claims number is a weekly snapshot, but there is a lot more ‘noise’ in the data.”