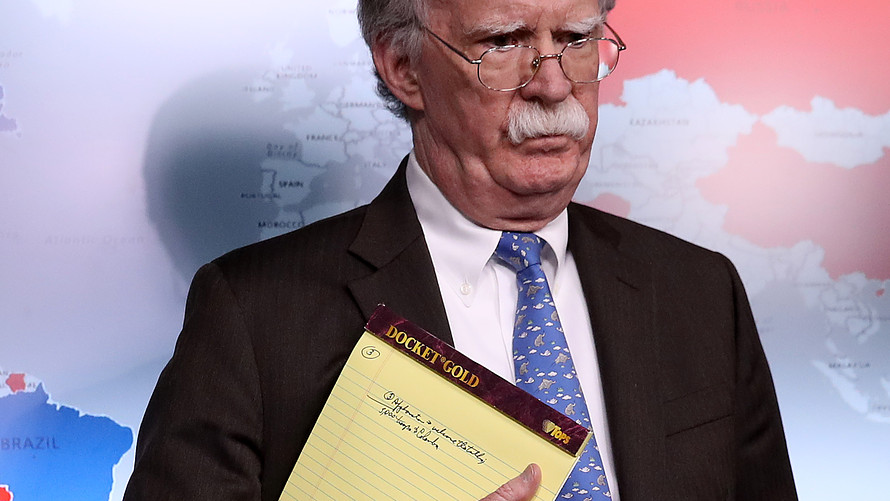 Getty Images
With handwritten notes on a legal pad, John Bolton listens to questions from reporters during a press briefing at the White House in January 2019.

WASHINGTON (AP) — Lawyers for former national-security adviser John Bolton told a judge Thursday they want to interview White House officials following new allegations that a pre-publication review of his tell-all book was politicized in an effort to block its release.

Michael Kirk, a lawyer for Bolton, said the interviews were needed to help establish whether President Donald Trump’s political appointees at the White House acted in “bad faith” in overruling the judgment of a career classification official and concluding that Bolton’s manuscript still contained classified information.

A lawsuit over Bolton’s book, including on the question of whether the Justice Department is entitled to proceeds from the publication, is still pending even though a judge in June denied a request for an injunction to block its release.

Arguments in the Justice Department’s lawsuit against Bolton over his book, “The Room Where it Happened,” took place one day after a new court filing from a lawyer for Ellen Knight, the White House official with whom Bolton worked for months to ensure that his manuscript was free of classified information that could possibly threaten U.S. national security.

The filing says that Knight determined in late April that the manuscript no longer contained classified information and that she told Bolton she had no more proposed changes. But after she advised National Security Council lawyers that she intended to clear the book for publication, she was told to take no action and to tell Bolton that the process was “ongoing.”

Weeks later, she learned that a White House official who she says had no previous classification experience had been instructed to conduct a second review of the manuscript. That official, Michael Ellis, flagged hundreds of passages that he believed were still classified. Knight disagreed with that conclusion and considered the re-review to be “fundamentally flawed,” according to the filing.

The book, which details Bolton’s 17 months as Trump’s national-security adviser, contains descriptions of conversations with foreign leaders that could be seen as politically damaging to the president. Those include accounts that Trump tied providing military aid to Ukraine to the country’s willingness to conduct investigations into the Bidens, and that he asked China’s President Xi Jinping to help his re-election prospects.

Don’t miss: Bolton book adds urgency to Trump bid to depict himself as a China hawk and to paint Biden as a Beijing apologist

The Justice Department in June sued Bolton to immediately block the release of the book. Though U.S. District Judge Royce Lamberth denied the request since thousands of copies had already been distributed, he also sharply scolded Bolton for moving ahead with the book’s publication without waiting for formal, written authorization that it had been cleared.

The case is still pending as the government looks to be able to seize proceeds tied to the book. Lamberth heard arguments Thursday as he weighs whether to dismiss the lawsuit or to allow it to move forward into an information-sharing stage known as discovery.

It was not immediately clear when Lamberth might rule.

See: ‘Open letter to America’ signed by 489 national-security leaders calls Trump ‘not equal to the enormous responsibilities of his office’

Kirk, Bolton’s lawyer, argued that Knight’s behind-the-scenes account opened the door to arguments that the White House acted in bad faith during the classification review process, with an eye not toward protecting national security but rather to avoiding embarrassment.

He requested access to White House communications on the matter as well as depositions of senior White House officials, including current national-security adviser Robert O’Brien, who according to Knight’s statement directed Ellis to undertake another classification review after Knight had completed hers.

“The government cannot and does not dispute that the law does not permit it to classify information for the purpose of preventing embarrassment,” he said.

Lamberth, who has previously said that Bolton’s actions may have exposed him to possible criminal charges, chided the lawyer for what he said was a “political diatribe” unrelated to the question of whether Bolton mishandled classified information.

Justice Department lawyers, meanwhile, maintain that Bolton shirked his obligation to wait for formal clearance and wasn’t entitled to abandon the pre-publication review process out of frustration.