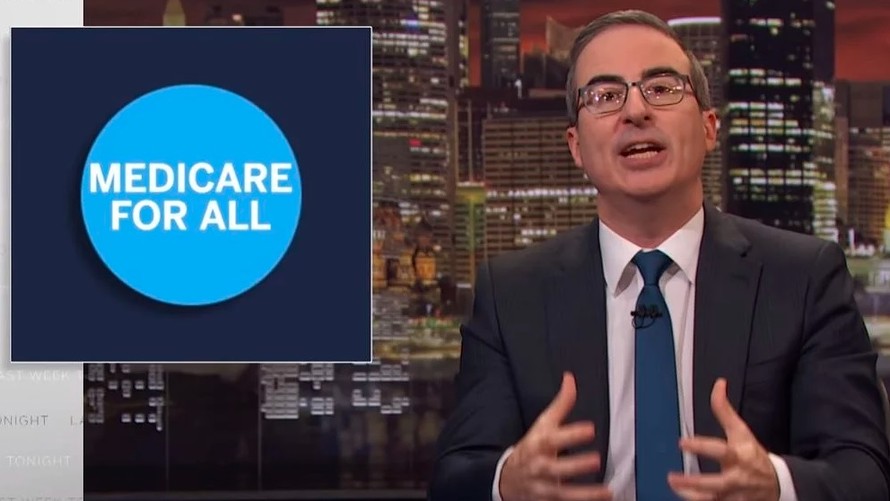 ‘It would definitely be an improvement over what we have now. The problem is it would leave so much of our current insurance infrastructure, with all of its problems, intact. So that’s kind of like being offered either a sh— sandwich or a slightly smaller sh— sandwich with guac.’

“Last Week Tonight” host John Oliver, born in Birmingham, England, but an American citizen, spent most of his return from break this weekend voicing support for “Medicare for All,” a policy proposal that’s central to the presidential platforms of Bernie Sanders and Elizabeth Warren.

Oliver started off by taking shots at critics like right-wing pundit Sebastian Gorka, who was shown in a clip talking about the superiority of the U.S. system.

Here’s how Oliver responded: “America does [as Gorka had said] have one of the best health-care systems in the world — for rich, famous people,” he explained. “Unfortunately, too many people are born in this country with a terrible pre-existing condition called ‘Not being Beyoncé.’ ”

Jokes aside, Oliver took a deep dive into three counterarguments against Medicare for All: cost, wait times and choice, each of which he shot down with plenty of his trademark zingers and Fox News clips.

“I will own all the things about it that are difficult, including the fact that, politically, it’d be incredibly hard to get passed,” he said. “In return, anyone who’s resistant to significant change is going to have to own all the flaws of our current system.”