Just when it seemed safe to go back to restaurants a new coronavirus outbreak threatens U.S. jobs recovery

New round of state restrictions to limit U.S. economic rebound 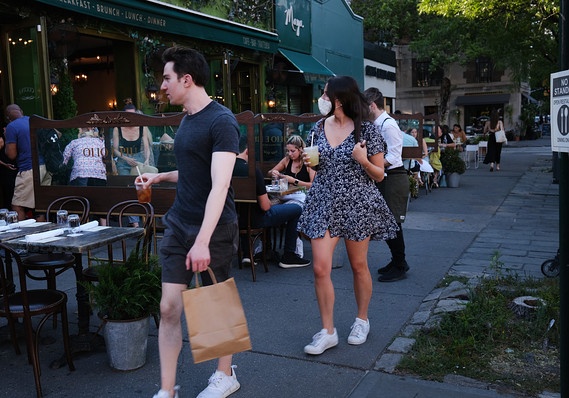 Getty Images
Outdoor dining in back, but indoor dining might not be anytime soon in states like New York after a resurgence in coronavirus cases. Rehiring in the U.S. is poised to slow in July after big gains in the prior two months in a potential setback for the economy.

The U.S. got some great news Thursday with the rehiring of 4.9 million people in June, but the two steps forward the economy took in May and June could be followed by one step back in July.

The problem? A resurgence in coronavirus cases, especially in states that allowed their economies to reopen early, is leading to renewed restrictions on businesses and consumers.

At the epicenter of the resurgence in the coronavirus epidemic is the restaurant industry.

The reopening of restaurants led to the return of some 3 million workers in May and June, accounting for 40% of the jobs the U.S. has regained since the onslaught of the coronavirus. That’s the good news.

The bad news? Many of the people rehired could be laid off a second time if more states place inside dining off limits again or pause plans to loosen restrictions.

California, Florida, Texas and other states have tightened restrictions after a fresh outbreak of COVID-19 cases while others such as New York and New Jersey have delayed plans to allow inside dining. In California, restaurants in 19 counties were told to cease indoor dining for at least three weeks.

The slowdown in rehiring at bars and restaurants could put a big dent in U.S. employment growth in July if the fresh viral outbreaks are not brought under control soon, economists say.

Eating and drinking establishments accounted for the bulk of the 7.5 million jobs the economy recovered in the past two months.

Yet restaurants still employed about 3 million fewer people at the start of July than they did before the crisis — a whopping 50% reduction. And the recent outbreak of coronavirus cases means many of those jobs probably aren’t coming back soon.

Adding insult to injury, fear of catching the virus has discouraged customers from making reservations or even eating outside. Reservations at restaurants stalled toward the end of June, according to the reservation-making site OpenTable .

“Consumers were already starting to shy away again from restaurants even before the states announced the reopening pauses and reversals as the fear of virus spread began to change consumer behavior,” said chief economist Scott Anderson of Bank of the West.