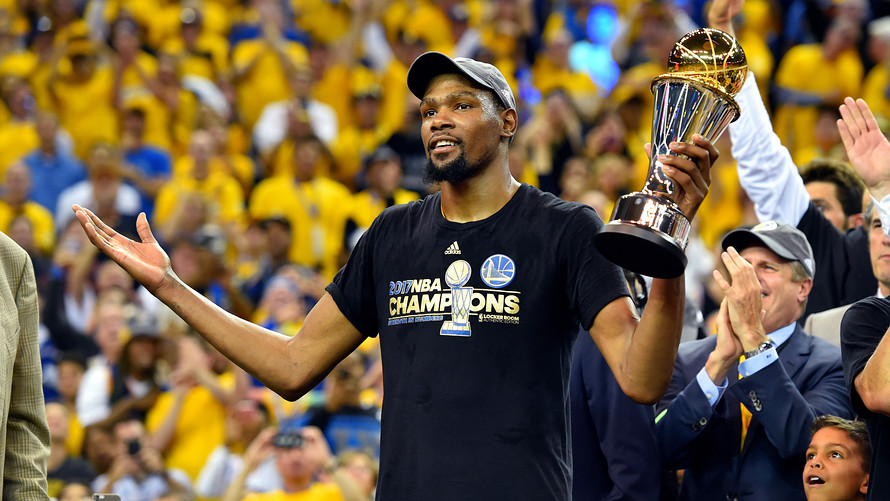 Getty Images
Kevin Durant of the Golden State Warriors is presented with the NBA Finals MVP Trophy in 2017.

Kevin Durant is taking his talents to Brooklyn.

The perennial NBA All-Star and two-time Finals MVP will leave the Golden State Warriors to sign a free-agent contract with the Brooklyn Nets.

Durant said earlier in the day he would make his announcement Sunday night on the Instagram page of his sports-business company, The Boardroom , but media outlets including ESPN beat him to it. At 6 p.m. Eastern, the Boardroom confirmed the news. “Kevin Durant has confirmed he will sign a max deal with the Brooklyn Nets when the free agent moratorium period ends on July 6th,” a statement read.

The deal is for four years and $164 million, and Durant is expected to be joined by All-Star guard Kyrie Irving and DeAndre Jordan, ESPN reported .

Durant ruptured his Achilles tendon during the NBA Finals earlier this month, and is expected to miss most, if not all, of next season.

In signing with the Nets, Durant spurned the Warriors’ five-year, $221 million offer.

Durant had been scheduled to meet with the Warriors, Nets, New York Knicks and Los Angeles Clippers on Sunday after the NBA free-agency period started at 6 p.m. He signed as a free agent with the Warriors in 2016, and won two NBA titles in three seasons there.

The signing is a devastating blow to the Knicks, who freed up salary-cap space this past year in hopes of signing Durant and possibly Irving as well.