KFC is selling meatless fried chicken — is it actually healthier than the real thing?

The CEO of Whole Foods, who’s vegan, questioned the nutritional value of fake meats from companies like Beyond Meat 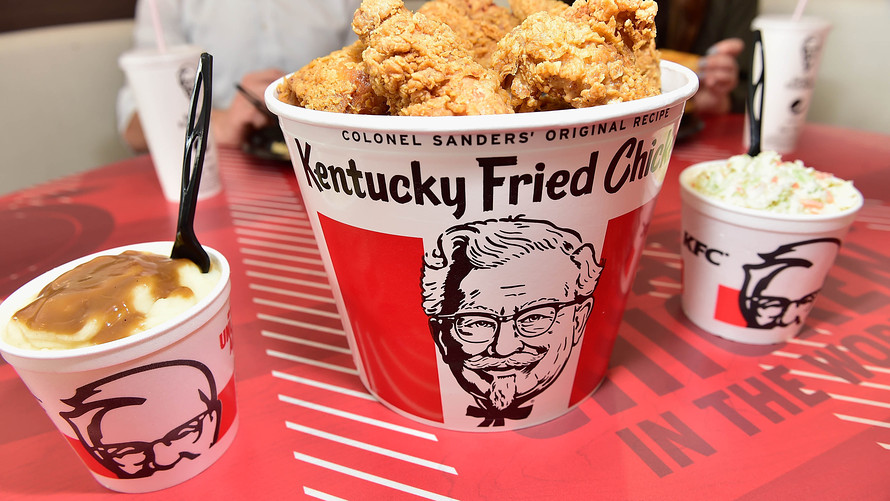 Getty Images Moses Robinson/Getty Images for KFC
Fried chicken purveyor KFC has gone meatless with new “Beyond Chicken” nuggets and boneless wings that will be tested at a Georgia location.

The colonel’s secret recipe has gone meatless. Kentucky Fried Chicken is selling fake fried chicken at one of its Atlanta locations to test customer demand, the latest instance of a fast-food restaurant partnering with plant-based protein maker Beyond Meat /zigman2/quotes/211617595/composite BYND +1.32% .

Demand for plant-based proteins has soared among restaurant diners — case shipments from distributors to restaurants jumped 20% between November 2017 and 2018, driven partly by customers’ perception that meatless proteins are better for them, according to the market research firm NPD Group.

But eaters who assume new plant-based protein options from companies like Beyond Meat and Impossible Foods are always a healthier option should proceed with caution, according to an opinion piece published Monday by the Journal of the American Medical Association.

‘For your health, it’s kind of a wash, but for the planet, and for our children’s future, it’s a huge win.’

—Bonnie Liebman, director of nutrition, Center for Science in the Public Interest

KFC and its parent company, Yum! Brands /zigman2/quotes/209029767/composite YUM +1.85% , did not respond to a request for information comparing nutrition facts for KFC’s Beyond Chicken nuggets and boneless wings to the meat versions. A single 27-gram Beyond Chicken nugget is 60 calories and contains three grams of fat, 145 milligrams of sodium and five grams of protein, a spokeswoman for Beyond Meat said. One KFC real meat extra crispy chicken tender has 140 calories, seven grams of fat, 320 milligrams of sodium, and 10 grams of protein, according to the KFC website. But the site doesn’t list how many grams one serving is.

“Each Beyond Fried Chicken nugget is lower in calories, fat and sodium than a comparable serving of KFC Extra Crispy Tenders or Popcorn Chicken,” a spokeswoman for Beyond Meat said. “We know that consumers are increasingly pulling away from processed meats because of the associated health baggage. Beyond Meat is proud to offer a better-for-you option that has a similar level of protein but is free of antibiotics, hormones, GMOs, and soy and is absent the properties that the World Health Organization and other leading institutions have linked between processed meat consumption and global health concerns.”

Although plant-based proteins provide an important alternative to red meat — which has been linked to heart disease and some cancers — it’s “far from clear” whether new plant-based options from companies like Beyond Meat and Impossible Burger are better nutritionally, because there haven’t been enough studies to say so, the JAMA authors said.

Beyond Meat and Impossible Burger products are “highly processed,” they noted, so they may lack the nutrients that are naturally present in plant foods. They’re also higher in saturated fat than minimally processed plant-based protein sources such as beans and lentils.

Whole Foods CEO John Mackey, who’s a vegan, leveled a similar criticism against fake meat products in a recent interview with CNBC , calling them “super highly processed,” but making a point of not singling out Beyond Meat and Impossible Foods by name. “I don’t think eating highly processed foods is healthy. I think people thrive on eating whole foods,” Mackey told CNBC. (Whole Foods, which is owned by Amazon /zigman2/quotes/210331248/composite AMZN -0.94%  , was the first store to stock Beyond Meat’s fake chicken strips, CNBC reported.)

And when someone eats a plant-based burger at a fast-food restaurant, it often comes loaded with cheese, sauces, a white-flour bun and sides like French fries, so the overall nutritional value of the meal doesn’t end up being any better, the authors said.

The JAMA authors pointed out that Impossible Food burgers are made with high amounts of heme, a molecule that makes the patty “bleed” like real beef. Higher intake of heme has been associated with an elevated risk of developing Type 2 diabetes, they said. “Plant-based meat alternatives may have some role in improving human and planetary health, but there is no evidence to suggest that they can substitute for healthy diets focused on minimally processed plant foods,” the authors concluded. (One of the JAMA article’s three authors disclosed that he has received “research support” from the California Walnut Commission.)

Is ‘processed’ a dirty word?

“Critics of plant-based meat like to say that these products are ‘highly processed’ — a term that’s often naively applied to food pejoratively,” said Impossible Foods spokeswoman Rachel Konrad. She noted that “virtually every food we eat, whether prepared by a chef at a ‘farm to table’ restaurant or in our own homes, involves combining a select set of ingredients and processing them through dehydration, grinding, fermentation, blending or cooking.” Konrad cited bread as an example.

Impossible Foods’ goal is to “make products that, based on the best available scientific evidence, are better for people and the planet than the products they replace,” she said. The Impossible Burger has as much protein and “bioavailable iron” as animal-derived beef, without the many downsides associated with beef. The Impossible Burger has no cholesterol, less saturated and total fat than a comparable ground beef burger from cows, and fewer calories, she said.

The planet’s health is at stake, too

But individual health isn’t the only consideration. Consumers are also choosing fake meats because they don’t harm the planet as much as animal products, according to the market research firm Euromonitor .

The environmental benefits of fake meats may even outweigh the nutritional concerns, said Bonnie Liebman, the director of nutrition at the nonprofit Center for Science in the Public Interest.

Meatless burgers served at restaurants, for example, generally aren’t any healthier than their meaty versions, Liebman said. The Cheesecake Factory’s /zigman2/quotes/207909209/composite CAKE +2.32%   Impossible Burger clocks in at 930 calories and 2,270 milligrams of sodium, a CSPI analysis found. The meat version has 990 calories and 1,880 milligrams of sodium. (The Cheesecake Factory did not respond immediately to a request for comment.)

See also: The No. 1 reason to become a vegan — it’s not about your health

“For your health, it’s kind of a wash, but for the planet, and for our children’s future, it’s a huge win,” Liebman said. Beef does more damage to the environment and creates more greenhouse gases than any other food , she noted.

“It’s important to not just look at how these new products affect our health, but how they affect the climate crisis, which will have profound effects on our health,” she added. “You can’t just look at these products with blinders on and look only at the amount of salt or fat; you have to look at the bigger picture, which is how these products have the potential to curb climate change.”

The impact on wallets

Another factor is the cost of faux meats, especially at fast-food restaurants. MarketWatch crunched the numbers and found that the fake-meat menu items at Burger King /zigman2/quotes/202094900/composite QSR +0.57%  , White Castle and Del Taco /zigman2/quotes/208916544/composite TACO +1.29% were all more expensive than their animal-derived counterparts. KFC’s Beyond Chicken nuggets are available in six- or 12-piece combo meals (which include a side and medium drink) for $6.49 and $8.49, or a la carte with four pieces for $1.99. The boneless wings are available in six- or 12-piece options for $6 and $12. The real-meat version of a combo meal with three chicken tenders, mashed potatoes, a biscuit, a medium drink and a chocolate chip cookie sells for $5.

A nutritionist advises being ‘mindful’ about fake meat

Eating more plant-based foods can be a good thing for our overall health and the environment, with some caveats, said Vandana Sheth, a registered dietician and spokeswoman for the Academy of Nutrition and Dietetics. “Plant-based ‘meats’ can help people transition into a vegetarian or vegan lifestyle, especially if they miss the texture of meat, but they shouldn’t be consumed daily,” she said. “Many are just as high if not higher in fat, sodium and calories than the real thing.” Her advice: Eat a variety of foods such as whole grains, protein, colorful fruits and veggies, and heart-healthy fats from nuts and seeds to adequately meet your nutritional needs.

“Products like the new fake meats at restaurants are growing in popularity because of the growing interest in eating more plant-based foods. However, enjoy them mindfully,” she said.