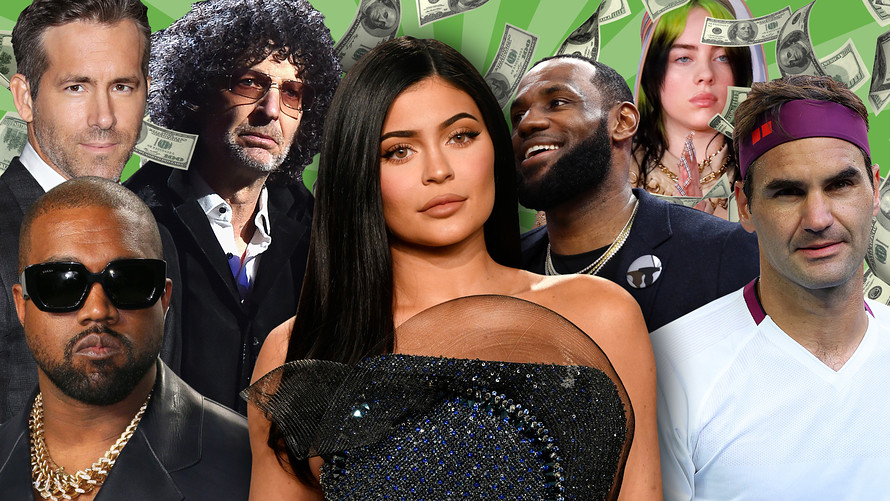 Kylie Jenner may not be considered a billionaire anymore — but these A-list actors, professional athletes and performers still can’t keep up with her.

Forbes dropped its annual 100 highest-paid celebrities list on this week, and the youngest member of the Jenner-Kardashian clan is No. 1 on the list with a cool $590 million. That’s more than three times runner-up Kanye West’s $170 million, and more than all of the pretax earnings of the rest of the top five celebs on the list combined.

The outlet drew its rankings from the pretax earnings of “front of the camera” stars across the world between June 2019 and May 2020, before deducting fees for managers, lawyers and agents.

The report noted that Forbes had stripped Jenner, 22, of her billionaire status last week after publishing a story accusing her and her mother of inflating the size and success of Kylie Cosmetics for years. Still, selling a 51% stake in her company to Coty (NYS:COTY)   for $600 million earlier this year (pocketing $540 million pretax) brought in enough cash to put Jenner atop the Celebrity 100 list. And her net worth remains roughly $900 million .

The bombshell Forbes report claimed that filings released by Coty over the past six months show that Jenner’s business is “significantly smaller, and less profitable, than the family has spent years leading the cosmetics industry and media outlets” to believe. What’s more, the report suggested that Jenner and her mother sent Forbes a falsified 2016 tax return to exaggerate sales. Coty named a new CEO days after the Forbes report.

Following publication of the story, representatives for Kylie and Kris Jenner sent a letter to Forbes reading in part, “The accusations that the Jenners, and/or their accountants, falsified tax returns and then lied about their 2016 revenues for the last four years, are absolutely false.” Kylie Jenner also responded with a Twitter (NYS:TWTR)   thread last week, arguing that, “I’ve never asked for any title or tried to lie my way there. EVER.”

Rapper West appears second on the top-earning celebrity list largely thanks to his Yeezy sneakers deal with Adidas (OTC:ADDYY) . The Yeezy brand pulled in an estimated $1.3 billion in sales in 2019, Forbes reported, putting West’s net worth around $1.3 billion .

Athletic all-stars including tennis pro Roger Federer ($106.3 million), and soccer greats Cristiano Ronaldo ($105 million) and Lionel Messi ($104 million) round out the top five. And rising tennis star Naomi Osaka, at No. 90 with $37 million in income, set her own record for netting the most money any female athlete has ever made in a single year.

Tyler Perry, Neymar, Howard Stern, LeBron James and Dwayne Johnson round out the top 10. Check out their earnings below. 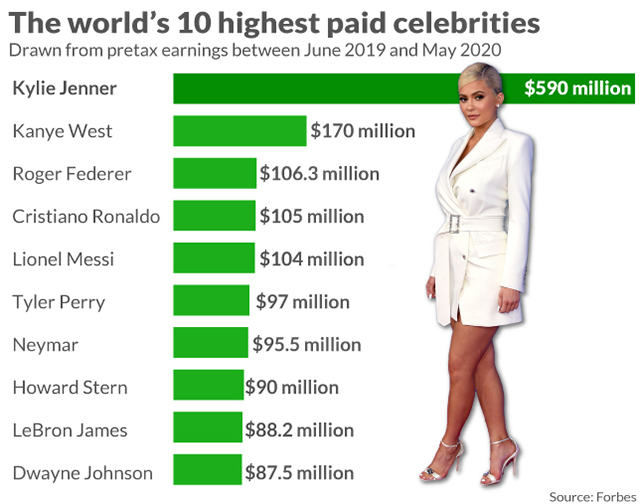 The Forbes list recognized the impact of the ongoing coronavirus pandemic, as well as the recent civil unrest following the deaths of George Floyd, Ahmaud Arbery and Breonna Taylor, on this year’s rankings. While the world’s highest-paid celebrities earned a combined $6.1 billion before taxes and fees, this was a $200 million drop from 2019. Forbes noted that the pandemic has forced stadiums to close, postponed movie openings and canceled sporting events and concerts over the past few months, which bit into many entertainers’ and athletes’ bottom lines.

This year’s list also highlights celebrities, such as Lin-Manuel Miranda, who are using their platforms to speak out after Floyd’s death to enact systemic change. It notes that Miranda is one of more than a dozen on the Celebrity 100 who have invested in Andreesen Horowitz’s Cultural Leadership Fund to expand investment opportunities and access to tech jobs among African-Americans.

Miranda is a newcomer on the list this year (No. 62 with $45.5 million) thanks to Disney (NYS:DIS)   paying a reported $75 million for the rights to air the filmed version of his Broadway hit “Hamilton,” which will begin streaming on Disney+ on July 3.

And speaking of streaming, Netflix (NAS:NFLX) , Apple (NAS:AAPL)   and Amazon (NAS:AMZN)  paid $300 million to the stars on the list, Forbes reported, with Netflix alone shelling out more than two-thirds of that bank. Some of the celebs who’ve seen big bucks streaming in from these services include Ryan Reynolds (No. 18, $71.5 million), Billie Eilish (No. 43, $53 million) and Jerry Seinfeld (No. 46, $51 million).