Lamborghini: Calm in the eye of the Huracan 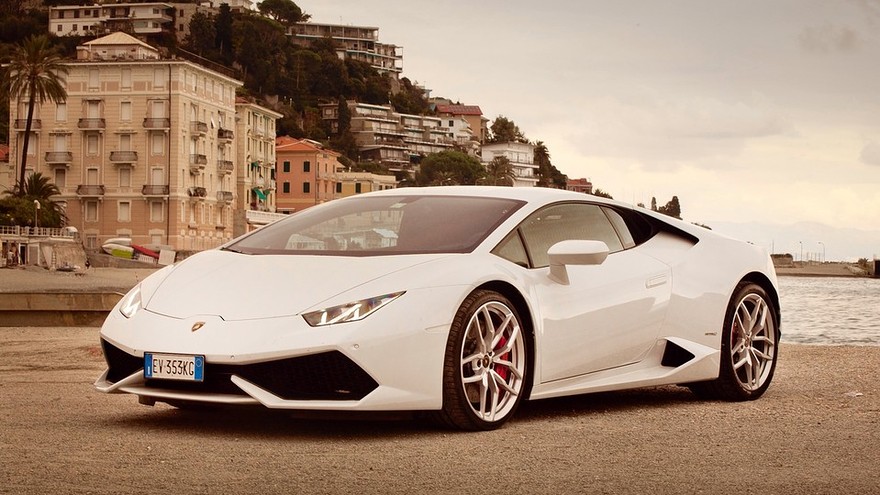 Dan Neil/The Wall Street Journal
On the rare occasion when you can fully drop the hammer on this car and hold it down for a few seconds, Lamborghini's Huracan throws existence into a daring, unblinking, free-falling fast forward. Gear changes bang away like Satan’s at the door.

Seconds before the accident, I had noted the man in the right lane, or more precisely the Citroën C6 executive saloon he was driving. Always loved that car. The style holds up. It was about 5:30 p.m. -- prime accident time, statistics tell us—and traffic on the European Route E15 north of Lyon, France, was moving well. It was a quiet, glorious September evening in the Rhone Valley.

I was alone, slung in the leather-lined cockpit of a 2015 Lamborghini Huracan LP 610-4, painted vampire-white with occult LED headlights and a face like a Kabuki general grimacing in rage. I had left the factory in Sant’Agata Bolognese, Italy, the morning before and was en route to the Paris auto show by way of an insane, self-imposed detour of about 300 miles along the Route Napoleon and the Alpes-Maritimes. Total distance was right at 1,000 miles. It looked a lot shorter on the map. 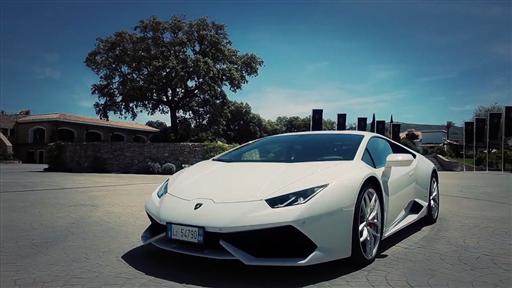 The cool calm of the Lamborghini Huracan

The 2015 Lamborghini Huracán moves a dancer's grace but comes with unexpected danger: other drivers who stare instead of drive., Dan Neil reports.

If I could keep on schedule, I’d just arrive in Paris on the Wednesday night before the show, nose cone glowing, lighter by exactly one set of brake pads.

Replacing the hugely successful Gallardo as the company’s entry vehicle—the ante is around $237,000 for this two-seat, mid-engine, aluminum-and-carbon chassis 3,400-pound berlinetta—the 10-cylinder Huracan is already shortlisted for the title of world’s hardest accelerating series-production car.

Car and Driver timed the all-wheel drive Huracan at 10.4 seconds in the quarter-mile, quicker than a Ferrari 458 Italia or a McLaren 650S. And their Lambo was still going upstairs like a bat out of hell at the timing lights: 135 mph.

I can believe it: On the rare occasion when you can fully drop the hammer on this car and hold it down for a few seconds, the Huracan throws existence into a daring, unblinking, free-falling fast forward. Gear changes bang away like Satan’s at the door.

I am a bit dubious that the Huracan’s naturally aspirated 5.2-liter V10 engine produces only 602 hp. I was thinking maybe 700? The car has three driving modes selectable through the steering wheel-mounted “Anima” switch: Strada, Sport and Corsa. In Corsa (maximum sportivo, with full-stiff dampers and sharpest steering, sharpest throttle response, higher thresholds of gear-holding) this car is bleeding, quick-twitch muscle. At its 8,250-rpm redline shift, the Huracan’s four tailpipes spatter blue fire and crackle like a meteorite breaking up. It’s pretty theatrical, even for France.

And yet in the weird, amoral world of exotic cars/male compensation, the new Huracan represents outstanding value for money. To get another new car this fast you’d really have to add another 0 to the price.

The Huracan chassis is a hard-as-nails composite of structural alloy and carbon fiber that is 50% stiffer than the Gallardo. To celebrate the ultrastiff chassis, the engineers also made the suspension flinty and hard-core, with optional magnetically adaptive dampers that can be turned up to “slipped disc” mode. The Huracan just doesn’t do body roll. The steering is heavy and nicely naughty just off center, and the 15-inch carbon-ceramic brakes are mega-strong but with a sweet and precise uptake under load. A good thing, too.

The Route Napoleon—taken by the Le Petit Empereur in 1815 on his way to Waterloo and a long vacation—will test any car. In places it is a broad four-lane highway with three digit sweepers; in others a narrow, tire-grinding thread of asphalt clinging to the steep forests amid the region’s national parks.

Lamborghini used to be the one brand of exotic car that you could safely make fun of. They were preposterous Italian codpieces, overstuffed and cartoonish, bought by a clientele who could be described the same.

I like to play Doppler Downshift: I lower the car windows and, emerging out of a tunnel into a blaze of sunlight, I kick down two gears and stand on it, listening for the pitch-bending echo off the granite slopes. The Huracan is very good at Doppler Downshift.

Discomfiting to some purists, the Huracan chassis arrives at the factory in Bologna, Italy, from Neckarsulm, Germany, and parent Audi’s /zigman2/quotes/207972355/delayed DE:NSU +0.63% high-tech coach-building sheds. Meanwhile, the V10 engine droid arrives from a facility in Hungary. And that is a bit of a messaging problem for the Lambo marketing department, some dimming of provenance. But, come on, the assembled car is so Italian it practically has garlic breath.

At this point, the notes were fairly expansive. “This thing feels like it was built by General Dynamics. Oh no, then it would cost $8 billion a copy!” It’s true, the Huracan has a novel sort of anechoic timbre to it that filters out the raw and thrashy noises and lets in only the most lushly percussive and emotional sounds. I actually did not touch the audio system in two days and 20 hours on the road.

I was a bit crestfallen. Lamborghini used to be the one brand of exotic car that you could safely make fun of. They were preposterous Italian codpieces, overstuffed and cartoonish, bought by a clientele who could be described the same.

But the Huracan is really quite an accomplished automobile, even suave and design-forward. The exterior and interior cohere with the company’s distinctive hexagonal form language, from air intakes to the enamel-red flip-up guard over the start button. The row of avionics-style switchgear at the top of the center console are ultracool, and the multifunction controls—Audi’s familiar Man Machine Interface, or MMI, console—instantly intelligible.

Gripes? There was a maddening lag in the navi system that added about 100 miles to my trip in missed turns, quickly exhausting my supply of Gallic oaths. Also, toll booths: It is impossible to reach the machine seated in the pilot’s couch of this belt-high automobile. You actually have to climb out of the open window and sit on the sill at toll plazas like a rich lunatic. That could get old. 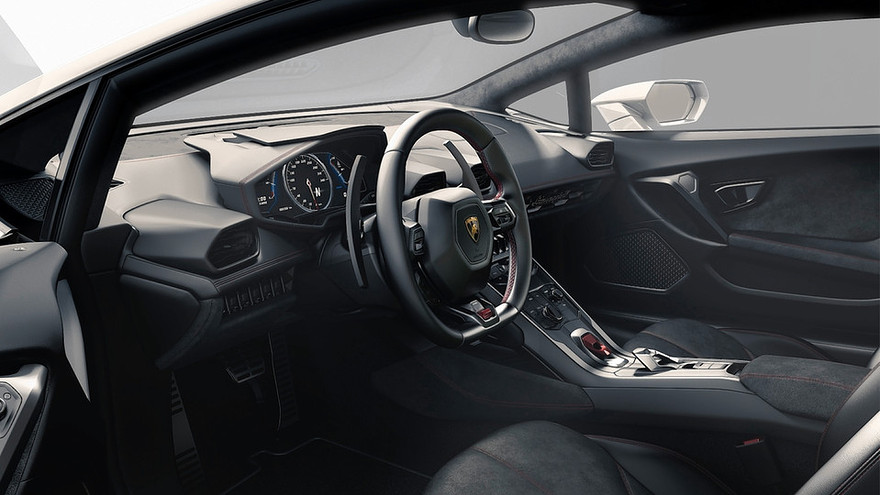 Volkswagen Group of America
The row of avionics-style switchgear at the top of the center console is ultracool, and the multifunction controls, Audi’s familiar Man Machine Interface, or MMI, console, instantly intelligible.

The Lambo and I gained the highway to the Citroen’s left, in the middle lane, and about 10 car lengths behind. He picked up the pace and signaled to merge right. Unfortunately, he failed to notice he was already in the far right lane. With a ferocious clang and shower of sparks the C6 drove into the back of an oxygen tanker truck that was parked on the shoulder. I estimate he was going a bit over the speed limit, so figure 140 kph, or about 87 mph.

Well, that was a surprise. As it does in these situations, time dilated. He hit the truck with a glancing blow and the car spun violently into the air, momentarily throwing a shadow across my car, then slamming down in front of me, sliding on its side and spraying the Lambo with shed parts, glass and coolant.

I was close enough that I could see the gray glow of the Citroen’s exhaust manifold and thought, “Huh, V6 diesel, interesting…” The sharp smell of his air bags. I had time for other thoughts, too. Save the Lambo. I’m getting T-shirts made up.

But by this time the Huracan and I were thinking as one. I gently feathered the brakes and dove across the Citroen’s spraying trail of debris toward the shoulder. The windshield was instantly covered with oil. Broken glass collected in piles in lower grille and aero pieces. I could hear the car’s aluminum skin being raked with shrapnel, and I fully expected a tire would give way. I just nicked past to the right before the Citroën snapped back onto its wheels and spun a final time, coming to rest up against the Armco, pointing the other direction.

A miracle: A very nice man, about 60 years old, stepped out of the Citroën, completed unhurt and apparently unfazed. I asked what had happened. “I was looking at your car,” he said, in French. Well, in that case, it’s all right.