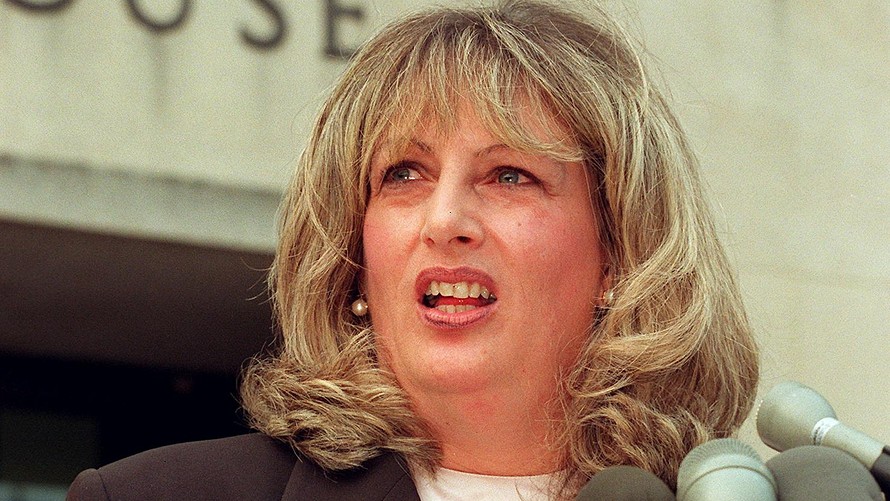 AFP/Getty Images
Linda Tripp talks to reporters outside of federal court in Washington on July 29,1998, following her grand jury testimony.

WASHINGTON — Linda Tripp, whose secretly taped conversations with former White House intern Monica Lewinsky provided evidence of an affair with President Bill Clinton that led to his impeachment, died Wednesday. She was 70.

Tripp’s death was confirmed by attorney Joseph Murtha, but he provided no details. She had been treated for breast cancer in 2001.

Tripp was a 48-year-old divorced mother of two living in Columbia, Maryland, when she became a controversial national figure as the Clinton impeachment investigation unfolded in 1998. For some she was a heroine who stood up for the rule of law; for others, she was a schemer for profit who betrayed a friend while posing as a motherly confidant.

As news broke that Tripp was near death, Lewinsky tweeted: “no matter the past, upon hearing that linda tripp is very seriously ill, i hope for her recovery. i can’t imagine how difficult this is for her family.”

Lewinsky was 22 when she worked as a White House intern in summer 1995. That November she and Clinton began their affair, which continued after she was hired for a West Wing job. Reassigned to the Pentagon in April 1996, Lewinsky met Tripp and they became friends.

Tripp provided nearly 20 hours of recorded conversations with Lewinsky to special counsel Ken Starr, who had been investigating a potpourri of allegations against the president since his appointment in 1994. His blockbuster report, which included a graphic account of the sex scandal, became a bestseller.

Tripp first told the lawyers of Paula Jones about the Clinton-Lewinsky affair in advance of their deposition of the president. Jones had sued Clinton in 1994 for sexual harassment while working for the state of Arkansas in 1991 during Clinton’s governorship; her attorneys were looking for evidence of Clinton affairs to support her claim.

Clinton denied during the 1998 deposition for the Jones lawsuit that he had “sexual relations” with Lewinsky. His denial became central to an article of impeachment charging perjury. A second article charging obstruction of justice stemmed from allegations of encouraging perjury by witnesses and other wrongful actions.

The House impeached Clinton in December 1998. After a five-week trial in the Senate, senators rejected both articles on Feb. 12, 1999.

While defending the taping as necessary to protect herself if her credibility were questioned, Tripp also consulted with a New York literary agent before beginning her secret recordings. Her initial concerns proved warranted when officials and pundits questioned her motives and attacked her character.

Tripp soon became a recognizable member of the wide cast of characters in the impeachment drama, so much so that actor John Goodman appeared as Tripp several times on “Saturday Night Live.”

At the time of the scandal Tripp had been a career civil service employee, and since 1994 she had worked for the Pentagon arranging tours of U.S. military bases for select civilians. Before that she had spent a year working on Clinton’s transition team and had been a confidential assistant in the office of the White House counsel in George H.W. Bush’s administration.

In 1997 Tripp played a role in another Clinton scandal when she provided support for Kathleen E. Willey, a White House staffer who alleged that the president had kissed and fondled her in a White House office.

In January 2001, Tripp lost her Pentagon job and nearly $100,000 annual salary when the Bush administration came into office.

She then sued the Defense Department, alleging that a Pentagon official released confidential personal information about her to The New Yorker magazine in 1998. As part of a settlement reached in November 2003, she received more than $595,000, a retroactive promotion and retroactive pay at a higher salary for the final three years of her employment.