Banks dominate China’s stock market much the way the big tech companies do in the U.S.

Eight of the 10 most valuable China-listed large caps are financial lenders, with the Industrial and Commercial Bank of China /zigman2/quotes/202525815/delayed CN:601398 -0.23%  — the largest company in the world by assets — the biggest of the bunch.

It was surpassed in valuation not by another bank, nor even a tech giant, but by a liquor company — one with a base of unquenchable consumers and investors.

Kweichow Moutai Co.’s shares /zigman2/quotes/208743311/delayed CN:600519 +1.34%  soared Tuesday as the distiller’s financial results showed it had breezed through the coronavirus shutdown, and its market capitalization hit 1.8 trillion yuan ($253 billion). Its shares have hovered around 1,400 yuan ($197), remaining the priciest stock on the Chinese mainland.

Its trading cooled before the close Tuesday, putting ICBC back on top, but its reign at the top — no matter its brevity or its intraday nature — spoke volumes about customer appetite for its brand.

That brand is mostly seen in the form of an outlandishly pricey liquor called baijiu, which is as much a cultural institution in China as it is a beverage. The clear fiery spirit is stronger than your average bourbon or vodka, and newcomers often compare its flavor to paint thinner, after their coughing fits have ceased.

But in China it is everywhere. Low-quality brands made by other companies cost about $1 a pint, and are tippled by laborers sitting on plastic stools for a quick noodle lunch. Artisan bartenders have begun attempting what years ago was a no-no — mixing it into a cocktails. 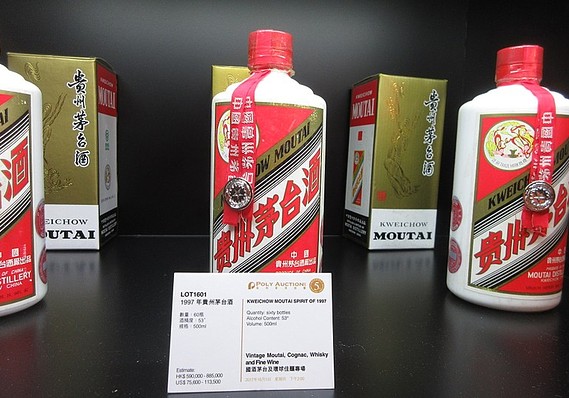 WikimediaCommons/HunagnTwuai
Bottles of Kweichow Moutai baijiu on display before a 2017 auction at the Grand Hyatt in Hong Kong.

But its mainstay role was and remains as restaurant-party lubricant. “With Chinese drinking, you have this almost ritualized — and it originates in ancient rituals — collective drinking. It’s an energetic group activity that’s very appealing,” Derek Sandhaus, an author of books on baijiu who now sells his own brand, told Barron’s last year .

Kweichow Moutai and its high-end competitors are the prized items to bring to banquets or give as gifts. They became such a common currency of high-level palm greasing among officials that President Xi Jinping’s 2013 anticorruption campaign put a particular focus on the product.

Though sales fell that year, they rebounded as the company smartly turned to retail consumers versus government-related events. And now the company has skated through the coronavirus crisis in China, according to recent financial statements , while others in the consumer sector have been crushed.

“In the short term I can’t see any major threats, but there are several long-term challenges facing the baijiu industry. Foremost is the fact that baijiu remains most popular with older generations of Chinese, particularly Chinese men, suggesting that baijiu distilleries need to do more to attract younger and more diverse customer bases,” Sandhaus told MarketWatch on Thursday

Kweichow Moutai surpassed multinational Diageo PLC /zigman2/quotes/208129584/composite DEO -0.14%   /zigman2/quotes/205611832/delayed UK:DGE +0.19%  in 2017 as the world’s largest distiller, an impressive feat from a brand that gets nearly all its revenue from its home country, while most large spirits sellers operate in numerous markets.

Joining Kweichow Moutai in creeping into the top 10 of China’s finance-dominated large caps is a second baijiu maker, Wuliangye Yibin /zigman2/quotes/205235060/delayed CN:000858 +5.38% . Though its market value is a third of Kweichow Moutai’s, its stock has risen more than 50% in the past year, and its chairman told Chinese state media last week that he was “confident of double-digit increase this year” in sales.

While China’s economy nurses its pandemic hangover, the party goes on for baijiu producers.