Those major marketers and others, including H.J. Heinz, are paying to have their products appear in a one-time charity performance of the musical "Saturday Night Fever," which also will include live commercials for their brands before and after intermission. Publicis Groupe's Leo Burnett conceived and organized the performance, persuading its big clients as well as the show's producer to take part in what aims to be a cheekily shameless product-placement event.

Although the March 1 performance is a one-off, Leo Burnett says it wants to open up theater productions to more inventive advertising. "If, as a result of this, a client or theater approached us and said, 'Would you be interested in doing this for one of our brands?,' we would," says Jim Thornton, executive creative director for the agency's London office. "This is a seed of an idea." 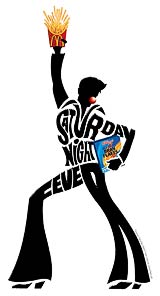 It is the latest example of advertising melding with entertainment as marketers seek new ways to reach consumers who increasingly tune out traditional ads. Product placements are appearing more and more in television programs and movies.

Adam Spiegel, the producer of "Saturday Night Fever," a musical adaptation of the 1977 movie starring John Travolta, says he wouldn't want Leo Burnett's push for advertising in theaters to go any further. "I think theater should remain one of the few sanctuaries where people aren't inundated with ads," Mr. Spiegel says.

He says he relented because the proceeds would benefit a charity, Comic Relief, which raises money for poverty and social programs in Africa and the United Kingdom, using comedians and entertainment to bring in donations. It is unrelated to the U.S. charity with the same name.

While it is the first time that advertisers could think of product placement in London's theaters, Broadway has experimented in a limited way with such marketing. In 2002, ads for Cie. Financière Richemont's Montblanc pens and Rémy Cointreau's Piper-Heidsieck champagne appeared in the backdrop during an updated staging of the Puccini opera "La Boheme."

The "Saturday Night Fever" charity performance plans to go much further, with placements designed to be over the top. In Act II, Tony, the main character, says he needs to put on a new shirt. Tony's brother replies: "That's no new shirt. That's new citrus Daz with fast-acting enzymes, especially formulated to lift tough, ground-in stains in an instant." Tony's mother then walks by with an improbably large box of P&G's Daz detergent.

For on-stage advertising really to catch on in theaters, product placements would have to be subtle, with products that fit the play, Leo Burnett says.

If agencies could figure out how to advertise within plays, Heinz would be on board, says Scott Garrett, vice president of brands for Heinz. He notes that theaters reach far smaller audiences than TV, radio or magazines, making them a less-attractive ad venue.

"To break through the clutter of the thousands of messages that we are exposed to every day in any way, that is of interest to us," Mr. Garrett says. "That level of surprise that something like this would give the theatergoers would give an impact."

The audience at the product-filled "Saturday Night Fever" performance at London's Apollo Theatre won't be shocked, as ticket buyers are being told about the event. Leo Burnett employees purchased all the tickets and resold them to clients and other associates.

Besides benefiting Comic Relief and the marketers, the event also is a publicity stunt for Leo Burnett. The agency wants to create buzz for itself and woo new clients. "This is about Leo Burnett seeing itself as a brand," the agency's Mr. Thornton says.