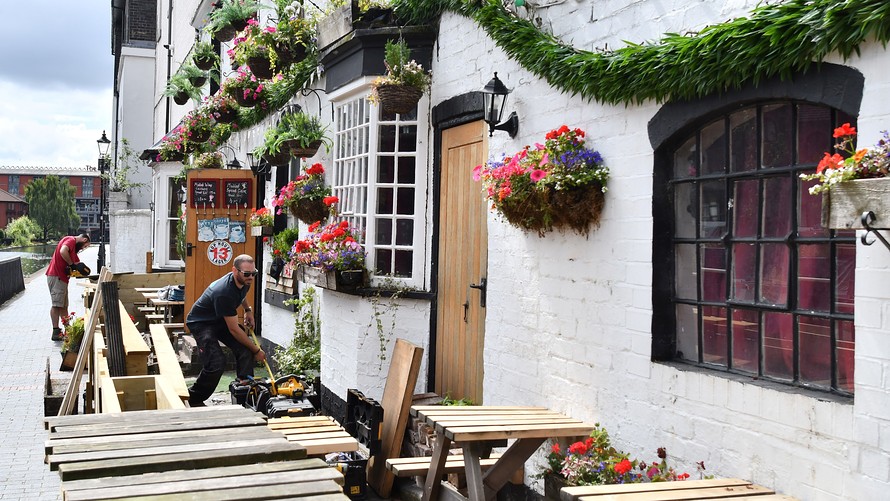 AFP via Getty Images
Workers prepare an outdoor seating area at a pub along the Old Main Line canal in Birmingham on July 2, 2020.

London stocks fell on Friday, with the index set to underperform its European rivals for the week, as weak oil prices weighed on major energy names, and alongside concerns that next week’s summer statement from the U.K. Chancellor will lack big tax cuts.

The Financial Times reported that Chancellor Rishi Sunak won’t offer up big tax cuts next week , but he is expected to make an announcement on supporting jobs retention plans. Saturday will mark the reopening of U.K. pubs, restaurants and cinemas, though the city of Leicester will remain locked down over a COVID-19 outbreak. The U.K. is also expected to announce on Friday that visitors from up to 75 countries may be exempt from quarantines, which includes returning U.K. vacationers.

The U.K. services purchasing managers index posted 47.1 in June, up sharply from 29.0 in May and the highest for four months. But it was in line with an earlier ‘flash’ figure of 47.0 in June.

Pub chain Whitbread (LON:UK:WTB) was one of the gainers, up 0.8%, while Just Eat Takeaway (LON:UK:JET)  rose 2%, after German-based rival Delivery Hero (FRA:DE:DHER)  jumped nearly 5% on a positive trading update .

Shares of Rolls-Royce Holdings (LON:UK:RR)  led the decliners with a 5% drop.

Shares of Land Securities Group (LON:UK:LAND)  rose 1.5% after the commercial-property developer and investment company said rental collection and footfall improved in June, and that it plans to restart paying dividends from November.